‘We mourn as we remember music that recedes into the past—sound that dies away before us, always while rushing ahead and waiting for new life in its future performance’. (Elizabeth Bergman, ‘Of Rage and Remembrance, Music and Memory: The Work of Mourning in John Corigliano’s Symphony No. 1 and Choral Chaconne’. American Music 31(3), 2013, 340-361, 358)

Mourning, in the West, has a soundtrack. ‘Nimrod’, from Elgar’s Enigma Variations, Op. 36 (1899) for funerals; Samuel Barber’s Adagio for Strings, Op. 11 (1938)—identified in a 2004 survey by BBC Today as ‘the saddest music ever written’—to commemorate the 9/11 attacks; Benjamin Britten’s War Requiem, Op. 66 (1962) to lament the devastation of two world wars. These works articulate memory and loss in the musical language of Western ‘high art’: the structural containment of familiar forms; the lush timbre of strings, orchestras, organs (ecclesiastical and vocal). Here, sorrow enters the sublime; transcended beyond coarse misery, it is universalised through the generic language of Western musical beauty.

Constructing the musical memorialisation of Others, however, a different aesthetic is projected. Laura Hassler, of Musicians Without Borders, tells of an outreach project with the widows of Srebrenica. To mediate the women’s grief, musicians from the Netherlands performed Bosnian folk songs, designed to invoke memories, and to facilitate mourning. Here, at the devastated margin of European society, loss summoned a folk idiom, rather than the monumentalised transcendence of white, middle-class remembrance. Empire excludes the grief of its victims from its own universalised language. Or perhaps there is something resistant to this refusal of the Western soundtrack to mourning; an insistence to mark loss in the mother tongue. Refusing to surrender the privacy of bereavement to the universalised embellishment of Western aesthetics, memory retains its truth. Either way, it becomes clear that how we remember is part of how we construct ourselves. Likewise, how we expect others to remember reflects who we suppose them to be.

It is arguably this capacity to articulate community through sound that turns music into such a powerful vehicle for commemoration. But these communal ties are not irrevocable: the publics enacted through sonic remembrance are as ephemeral as melody itself. Real for no more than a moment, each musical instant, private or public, let’s go even as it takes hold of its listener. Thus, the experience of shared, sonically-mediated grief simultaneously resists the coercion of collective despair.

The performative nature of music not only creates community with the living; it also unites us with the dead. Every moment—caught between sound and silence—bridges the divide between that which is here, and that which has already passed. The listener, poised in a sonic instance that has already been consigned to history, briefly lingers in lost time, reunited with the ghosts of the past. And, as each audible moment becomes mute, we are time and again confronted with our own transience. Every sound is a simultaneous call to silence; every note carries within itself its own death. Thus, music naturalises mortality, aestheticises it, sounds it out. The strains of our laments tame the threatening impermanence of our future.

DPhil in Musicology, University of Oxford

Juliana Pistorius was a participant in the first workshop of the Aural Commemoration strand, ‘Music and Memory’. You can listen to the panellists’ presentations from the workshop on our podcast series. 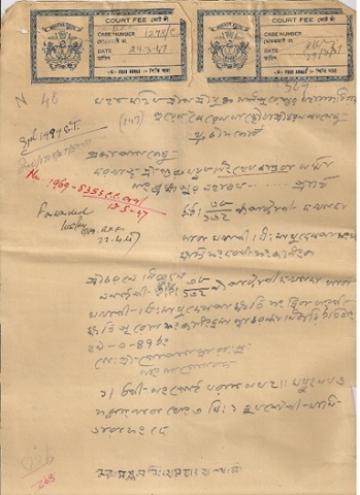