Music as a Form of Resistance: The Oud Playing of Rihab Azar

Rihab Azar, who spoke – and then performed – as one of the panelists at our first panel workshop in the Aural strand of our series, Music and Memory, is a celebrated oud player from Syria.

Rihab was born in Homs, where her father – a luthier – taught her to play the oud at an early age. Rihab went on to study at the Conservatoire in Damascus, where she also taught. Then in 2015, Rihab moved to the UK to study Music Education at King’s College London, and she has since been recognized as a musician of ‘Exceptional Promise’ and granted a visa under the Migrant Talent Scheme.

Rihab’s remarkable success as a musician hasn’t been achieved easily. She has recalled how, as a rare female oud player in Syria, she would sometimes be subjected to unkind remarks, making her feel uncomfortable and disappointed that she could not enjoy the normal life of a musician. Yet despite this, Rihab has continued to push and break boundaries, forming her own Zamaan Trio (zamaan means ‘time’ in Arabic), and playing at a great variety of events, including those associated with commemoration, such as Holocaust Memorial Day in London, the Grenfell Tower Memorial Service, and the Firefly International Gala which supports education projects in areas affected by war.

In addition to her elegant, often thrilling playing, it is clear that Rihab considers her role as a musician to be a deeply ethical, responsible one. She has spoken of a special bond that exists between the musician and their community, positioning the musician powerfully as a spokesperson for their people. Indeed, as she observed in our interview, Rihab feels that connection even more strongly now, given the ongoing conflict in Syria.

In the concerts that she gives and discussions in which she takes part, Rihab rewrites the narrative of Syrians as victims that we have seen time and again on our screens. Whilst acknowledging the suffering of the people, she also celebrates through music the precious and essential cultural heritage of the country, even as some of it is being destroyed. For her, this is a form of resistance. By doing so, she ensures that Syria remains in our minds through its beautiful sounds, regardless of whether it remains in our more mundane news feeds.

You can watch the panellists’ presentations from the ‘Music and Memory’ workshop on our podcast series. You can also watch Rihab Azar’s oud performance from the workshop. 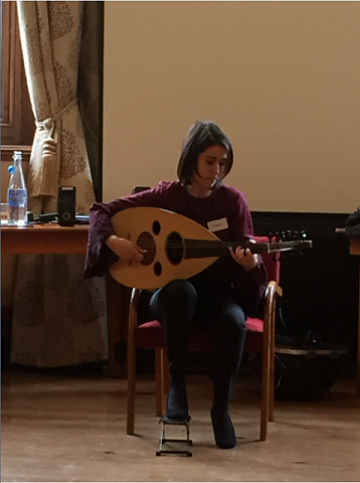