This term the Anglo-Norman Reading Group has been working on extracts from Beneit of St Albans’ Vie de Thomas Becket. This text, written c. 1184, was the topic of one of the chapters of my doctoral thesis, and I am now preparing a translation of it for publication.

The Vie de Thomas Becket is one of only three insular French Becket lives, and it has received very little scholarly attention despite being a biography of one of the most popular saints in the Middle Ages. The most surprising thing about the text, however, is its unique narrative stance: it is both pro-Thomas and pro-Henry II, despite widespread belief that Henry was indirectly responsible for Becket’s death and his own admission of guilt.

This required a certain amount of narrative gymnastics on Beneit’s part, resulting in him placing the blame largely on other figures in the story, such as bishops and members of the Anglo-Norman aristocracy who opposed Thomas as archbishop, whilst highlighting the close friendship and affection between Thomas and Henry. The narrator works the audience into his strategy of promotion, insisting on their own love and respect for their king and encouraging them to pray to St Thomas on his behalf. The text reveals how narratives of St Thomas were co-opted both by Henry II himself and by authors in response to this, and Beneit takes the opportunity to remind his audience of his own monastery, insisting on the importance of St Albans and its abbot in Becket’s story.

The group has been extremely well attended this term, and is made up of postgraduate students, university staff members, and independent scholars living in Oxford. It has been a pleasure and a privilege to share the text with all members of our group this term, and I have gained invaluable assistance and insight from fortnightly discussions. 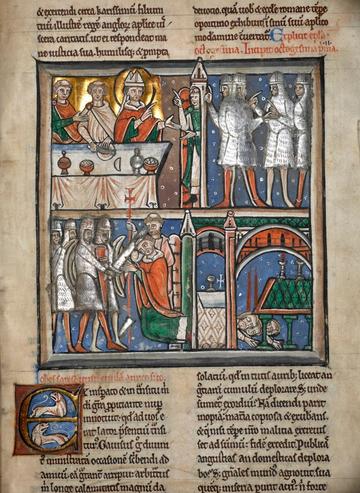