Nation, Commemoration and Armistice Day in the Caribbean

Nation, Commemoration and Armistice Day in the Caribbean

In December 1925, a Martinican newspaper, La Paix, looked ahead to a History lesson at the lycée Schoelcher in 2025.

“Duplantin,” the teacher asks, “who won the great war of 1914-1918?” Duplantin, we learn, has done his homework: “The French, sir,” he answers immediately, “but with the help of the English and the Americans. Their adversaries, the Germans…were completely beaten and were forced to sign the Peace at Versailles”. The newspaper used this vision of the future as a pivot, embarking on an attack on what it termed American ‘economic despotism’ since the war’s end. Duplantin and the textbooks of 2025 would remember France as the victors, but in reality the ‘arrogant dollar’ had been the only true winner.[i]

As the commemoration of Armistice Day winds down for another year, it is worth reflecting on the accuracy of La Paix’s prophecy. The centenary of the First World War has attracted some very welcome attention to the contributions made by Britain and France’s empires to the conflict but, amid the cacophony of public debate which accompanies the 11th November here in the UK, it is sometimes easy to forget that the place of the First World War in the public memory of Britain, the former Dominions, and France, is actually quite exceptional. In many of the former colonies, the knowledge of the war which La Paix took as a given is far from evident.

The predominantly national framework in which the First World War is still understood has left the conflict with an ambiguous position in Caribbean historical memory. The annual Armistice Day ceremonies which take place at Trinidad and Tobago and Jamaica’s main war memorials have become more official than public events. Insofar as this ongoing annual ritual is one of public commemoration, these days it is unclear exactly to many spectators whom or what is being remembered.

Members of the ‘modest crowd’ at the 2012 service in Port of Spain apparently ‘suggested that the event and others like it be broadcast live on television in order to promote patriotism in T&T’.[ii] By contrast, in Jamaica an Observer poll suggested that most teenagers thought of Remembrance Day as an American event with little or no relevance to their island.[iii] In the French Caribbean too, the persistence of an official ceremony has come to seem increasingly at odds with public understanding of and enthusiasm for commemoration.[iv]

The postcolonial context is key to understanding this situation. In the former British islands, independence brought with it the desire to construct a new national narrative, one whose central premise was an eternal, unchanging national identity stretching back to slavery; Jamaica’s inauguration of figures like Queen Nanny of the Maroons and Marcus Garvey as ‘National Heroes’ alongside independence leaders like Norman Manley was emblematic of this process.

In the French islands, the failure of departmentalisation in 1946 to meet expectations provoked a similar turn away from the former ‘Mother Country’.[v] Where Oruno Lara’s La Guadeloupe dans l’Histoire (1921) described the war as “a new opportunity for Guadeloupe to demonstrate its attachment to France”, his grandson and namesake denounced it in the preface to a 1979 re-edition as nothing short of an imperialist abomination.[vi] With all its sincere proclamations of imperial loyalty, the First World War was hard to fit into these new national narratives of resistance and/or specifically Caribbean identity.

In such a context, a war whose public commemoration was (and is) so strongly linked to the concept of ‘nation’ was bound to lose its resonance. In today’s Caribbean, commemorative efforts pass by largely unnoticed and appear increasingly outdated and out of place. Jamaica’s national war memorial is a striking example of how this dislocation can be as much physical as anything else. The site in central Kingston to which it was moved in 1953, then the George VI Memorial Park, was in 1973 renamed National Heroes Park and now forms the centrepiece of Jamaica’s invented national history.[vii] Passing by the memorial earlier this year, it was hard not to think about how this spatial transformation made the meaning of the monument more than a little ambiguous.

Despite the fine efforts of local historians, the islands of the Caribbean have therefore been poorly placed to take advantage of the centenary. Unlike in Britain where debates over the meaning of the war and its commemoration continue to animate public discussions, in the Caribbean uncertainty over the conflict’s meaning has slowly but surely transformed into an absence of meaning altogether.

La Paix’s studious schoolboy Duplantin could easily exist in Martinique in 2025; local historian Sabine Andrivon-Milton has noted that the best-informed groups tend to be children, who encounter the war at school, and the elderly, who remember a time when Armistice Day was celebrated with more devotion. Among those who grew up as the war slipped out of memory, however, the 11th November is sometimes understood to signify a religious holiday, or perhaps an act of remembrance for the victims of the 1902 Mount Pelée eruption.[viii]

It is, however, one thing to generate an awareness of history, and quite another to generate meaning. It is hard to shake the feeling that, once lost, the recognition which local historians’ work encourages will prove impossible to recapture. As a two minute silence falls over Britain and France on the 11th, a silence of an entirely different nature reigns in the West Indies, one which it is hard to see being broken.

[v] In 1946, Martinique, Guadeloupe, Guyane, and Réunion had their administrative status changed from colonies to French departments administered by the Ministry of the Interior.

[viii] Andrivon-Milton, Sabine, La Martinique et la Grande Guerre (Paris, 2005), p.7. It is likely that public knowledge has improved somewhat in Martinique and Guadeloupe in the context of France’s commemoration of the centenary.

Michael Joseph is a DPhil student researching the impact of the First World War on imperial politics in the British and French Caribbean. 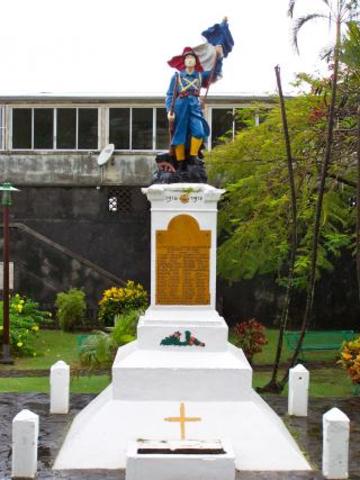