New Perspectives on Chinua Achebe, or the Writer Outside his Writing

Terri Ochiagha’s new book, Achebe and Friends at Umuahia, is ground-breaking on many fronts. Not only is it “the first in-depth scholarly study of the literary awakening of the young intellectuals who became known as Nigeria's ‘first-generation’ writers in the post-colonial period”; it also, subtly, proposes a new framework for receiving and interrogating the works of said writers. The Achebe we see in Ochiagha’s work is not an isolated, self-made writer but a strand in a network of writers whose literary beginnings has roots in late colonial education in Nigeria. Achebe and Friends is, therefore, an invitation to return to the scene(s) of literary formation, not via the oeuvre of a single writer – Achebe – but holistically through the literary production of contemporaries.

This approach, cartographic and archival, yields a crosscutting aesthetic and stylistic resonance that understandably betrays a commonality of influence among these writers: the books they read, the curriculum they were exposed to, as well as the socio-political and cultural contexts that informed their writing. Most importantly, however, are the implicit questions Ochiagha seems to raise by grouping these contemporaries.

Why, for instance, are readers of Achebe’s novels often not aware of I.N.C Aniebo and Chike Momah? What personal and institutional factors may have fuelled Achebe’s worldwide fame, unlike his equally brilliant contemporaries: Elechi Amadi, Christopher Okigbo and Chukwuemeka Ike?

Could it be, one may wonder, that their works are intrinsically less sophisticated and not as thematically urgent? Could it also be that Achebe’s proliferation across literary forms, his strategic self-positioning as a resister of colonial mis-narrations and, unlike his contemporaries, his subsequent re-location to the West that result in his towering fame? These questions further beg for an interrogation of what constitutes the canon of African literature, and does so by questioning the processes and logistics – outside the writer’s own work – that facilitate the global recognition (or canonization) of African writers.

At the launch of Achebe and Friends at the Race and Resistance Network here at Oxford on 15 May, the questions above surfaced in different forms, bearing witness to the need for the book itself. In other words, there are already indications that conversations around Achebe’s network of literary contemporaries – within the contexts of embeddedness in colonial geo-linguistic and textual influences – will preoccupy the next phase of Achebe scholarship. And implied in this growing trajectory is the need to return to – and deconstruct – the writer’s formative years through traceable networks of influence.

Timothy Ogene is completing the MSt in World Literatures in English. His dissertation focuses on traces of influence and intertextuality in Achebe’s early novels. 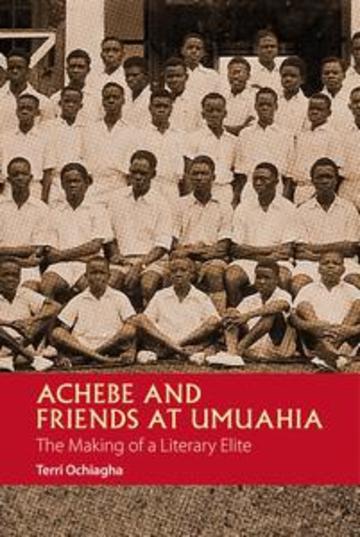