New SciPo Publication: Angled by the Flood: Poems about the Sea

‘Reading these poems makes me wonder how anyone could ever have supposed that poetry and science were at odds. With a passionate accuracy and attentiveness to detail these poems push, questioning, at the limits of our knowledge. And what better subject for such enquiry than the sea, that worldwide interconnected system in which a single organism or lap of a wave can be the bearer of a message that affects us all?’

I’m very happy to announce the publication of the third SciPo anthology in the trilogy: Angled by the Flood: Poems about the Sea. Our theme is the interrelation between science and the sea in poetry – the science of the sea. Our poets celebrate the myriad aspects of this intersection in unexpected ways, and, as in the previous two SciPo anthologies, our present climate crisis looms large.

The anthology includes winning and commended poems from both the 2020 SciPo poetry competition about science and the sea, as well as submitted poems from under-18 poets, and contributions from the organisers of SciPo. The beautiful cover image is by Oxford-based artist Caroline Low, and the design and typesetting is by Oliver Harrison. I am grateful to the following for their generous support of SciPo, which in turn has enabled this publication: The Oxford Research Centre for the Humanities (TORCH) and the Research Committee of St Hilda’s College, Oxford. Many thanks are also due to Lucy Newlyn for so kindly and perceptively judging the 2020 poetry competition, and to Philip Gross for his thoughtful and generous words (above).

Mother of the Sea by Eveline Pye

Open your eyes forget your arms by Katherine Collins

A Message from the Middle Triassic by Margaret Stewart

Darwin in the Galapagos by Sarah Watkinson

The Sea Around Us by Amanda Holland

The Bathymetry of the Inner Sound by A.M. Havinden

One fish at a time by Maria Mcrobb

The Curator and the Living Water by Jules Whiting

To purchase copies of the anthology (£6 + P&P), or the whole SciPo trilogy (£15 + P&P) please contact elsa.hammond@st-hildas.ox.ac.uk.

- Elsa Hammond is co-organiser of the SciPo New Network, and is a Lecturer in English at St Hilda’s College. She is also an award-winning travel writer and a poet. 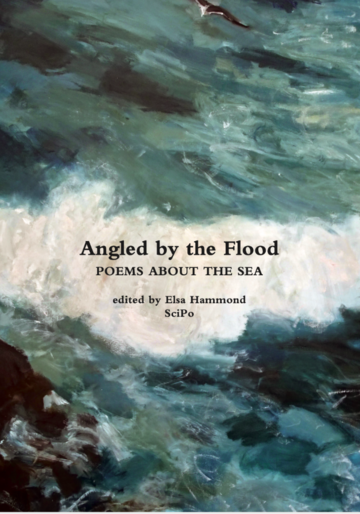