Abigail Allan completed a National Trust/University of Oxford curatorial research micro-internship project in March 2021. Here, she shares her findings and reflects on their context.

On the 17th November, 1817, Charles Winn received notification that his older brother, John, had died in Italy, and that he was now the heir of Nostell Priory, an eighteenth-century Yorkshire mansion. John’s death struck Charles hard.

Born in the 1790s, Charles was the middle child of Esther Winn of Nostell, disowned when she ran away to marry the baker, John Williamson, in a decidedly Downton turn of events. Charles, John, and their younger sister Louisa lived on a small farm, when, in their early childhood, their parents died. They bonded in their adversity and spent much of their childhood collecting things together. Later, as teenagers, they encouraged each to continue collecting, at home and abroad.

Eventually, they moved in with their uncle, Master of Nostell, who had no children of his own, and John became heir to the estate. Groomed to continue the aristocratic line, he embarked on the Grand Tour in the 1810s, bringing a new dimension to the siblings’ collecting.

‘…Pray procure some curiosities from Herculaneum… specimens of lava... some Roman Harp strings…’ (Louisa to John, 1816)

Shortly before his death, John had made plans to buy a large collection of ‘Etruscan’ vases from Naples, which Charles became ‘determined’ to bring home. This determination seemed partly motivated by loss, with his intermediary, Dr Harrison, reassuring him that ‘had he lived, [John] would have made the purchase’. The establishment of the collection at Nostell conjures a picture of a heartbroken Charles desperate to save his brother’s last collection, the best collection he had made since they started collecting sticks and stones in their childhood.

Charles had two cabinets made specially for the vase collection at Nostell: partly to memorialise his brother, but also to display them to guests. Letters found by electricians in a cupboard under the library floorboards in 2000 – such lucky events are one of the things I find most delightful about National Trust properties – show the vases had many visitors:

‘I shall be most happy… to view your interesting Etruscan Vases’, Reverend Stewart Montcatt[?] to Charles Winn, 22nd September 1855

Owning these vases marked Charles as someone who, according to Dr Harrison, had ‘a taste for antiquities’, for whom the vases’ value was ‘inestimable and… always reflect[ing] credit on the possessor’.

Moreover, this was the second largest private collection of vases outside the British Museum, according to Professor Corbett, former Assistant Keeper of Greek and Roman Antiquities there, who studied the vases in 1975. Owning such a collection was a statement, displaying the owner’s wealth, class, and aristocracy.

In 1975, Winn’s descendants sold the entire collection. I spent the majority of my internship locating the vases and sourcing high-quality images of them. Some were purchased in small groups by the same person, whereas others were sold individually. Some were later re-sold. The Nostell vases are now as far afield as Yale, Oxford, and Melbourne. It is charming to think that, scattered as they are, they are connected to each other by the love of siblings who collected with and for each other. 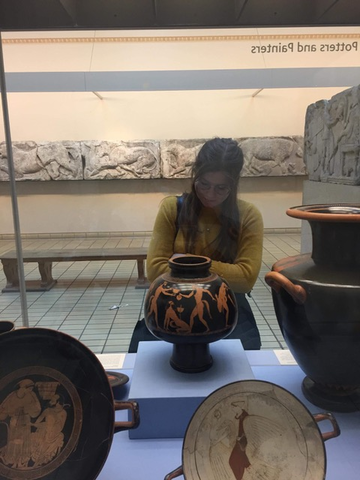 However, the Nostell Vases are also connected to Britain’s colonial mindset, being purchased during the Grand Tour. The antiquities dealer who sold the vases to Charles was, according to the Countess of Blessington, ‘not known for his sanctity’, despite being legitimate. As a student of Classical Archaeology, I am also interested in the vases’ ancient contexts: the style of their painted decoration and the colour of their clay shows the majority were made in South Italy, with a handful in Etruria (Central Italy), and many exported to Italy from Athens. They also came from a tomb context, as, even if they are broken, we have all of the pieces, meaning they must have been kept together in a closed area – a tomb – in antiquity. However, this is all we know for certain: in the eighteenth- and nineteenth-centuries, and even into the twentieth-century, it was normal for collectors and pseudo-archaeologists to not record provenances. Although Charles bought these vases legally, including paying customs dues, other items were illegally taken from Italy, and continue to be today, with Italy now campaigning for their return. Notably, Italy hosted a 2008 exhibition, ‘Ruins and Rebirth of Art in Italy’, in the Colosseum, which showed ‘efforts to foil tomb-raiders from the Renaissance to the present-day’. We are missing vital pieces of the vases’ history.

Alice Proctor, author of The Whole Picture (2020), states that: ‘the collecting process always involve[d] a degree of appropriation’, taking vases from their context and placing them in a new one, where they took on new meanings. Most obviously, these vases were labelled ‘Etruscan’, despite mostly being Greek. At Nostell, the vases gained two new meanings: they memorialised John and marked Charles as someone of good taste and familial wealth.

Abigail Allan is a first-year MPhil student reading Classical Archaeology at the University of Oxford. Her primary research interests are ancient Greek ceramics and erotica, which she worries makes her seem unprofessional on Twitter @abi_allxn. She has previously worked with the National Trust, National Historic Ships UK, the British Museum, and the Ashmolean Museum. 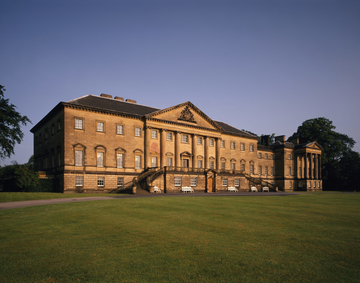