Not another invisible monument: an encounter at the Martyrs’ Memorial, Oxford

On February 10th, we had the pleasure of participating in the Post-War Commemoration seminar held at Oxford Brookes University. In the course of the discussion, Laura Tradii, a PhD candidate at Cambridge, cited the writer Robert Musil’s quote, that “there is nothing in this world as invisible as a monument.”

Later, ambling around Oxford, Geraldine spotted the wedding cake spire of a Gothic memorial at an intersection by Balliol College. “We can’t let that be another invisible monument,” she said, so we drifted over to take a look at what turned out to be the Martyrs’ Memorial.

Just before we reached it, a man in a studded black-leather jacket approached the monument with a wreath of daffodils and roses. Behind him marched a motley platoon: buzz-cut blokes with brick-wall expressions, women with multiple piercings and leather greaves, lots of bandannas and tattoos.

As their leader mounted the memorial’s steps and laid his wreath, I asked one of those gathered whom or what they were honoring. “Fred Hill,” she tersely replied, without removing the cig from her mouth.

Fred Hill, we soon learned from the leader’s eulogy, was a martyr to this band of bikers. He protested motorcycle safety laws by wearing a beret rather than a crash helmet, refused to pay fines, and was often incarcerated as a result. He’d died in prison on this date in 1984. The speaker praised Hill’s “sacrifice” and civil disobedience, and urged his audience to follow Hill's example in campaigning for the “freedom” and “choice” to ride without a helmet.

Cranmer, Ridley, and Latimer, burnt at the stake for defying the monarchy’s imposition of religious practices and doctrine, would doubtless be surprised to find a monument in their honour re-purposed in the cause of biker libertarianism. But to us, the ceremony vividly illustrated a central aspect of the Commemoration seminar. Monuments may seem stale and static—and yes, invisible to much of the public. But over time, they can serve as mutable and capacious symbols for a diversity of people and beliefs. 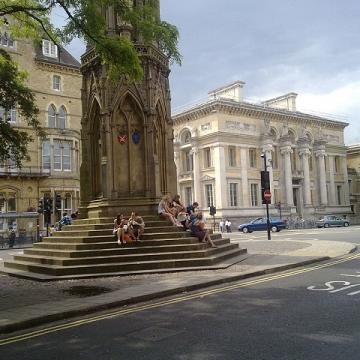