Not cis. Not trans. Genderqueer.

Bio and Abstract: This blog post synthesizes personal experience to describe how a person can be neither cisgender, nor transgender. Throughout this process, this post provides working descriptions of what it can mean to identify as ‘genderqueer.’

Andrew Joseph Pegoda (@AJP_PhD) has a Ph.D. in History and teaches women’s, gender, and sexuality studies; religious studies; and English at the University of Houston. Previous articles can be found in The Conversation, History News Network, The Houston Chronicle, Time, and The Washington Post, among others.

On the one hand, man is a body, in the same way that this may be said of every other animal organism. On the other hand, man has a body. That is, man experiences himself as an entity that is not identical with his body, but that, on the contrary, has that body at its disposal.

(Berger and Luckman, The Social Construction of Reality, 1966)

‘It’s a boy!,’ announced the physician who delivered me almost thirty four years ago.

But, I’ve never been anything like a ‘typical guy.’ My life experiences have led me to see the flaw in the popular wisdom that says you’re either cisgender or transgender.

I am unequivocally not cis, defined as ‘a person whose sense of personal identity and gender corresponds to his or her sex at birth.’

I am also not trans. Unlike many trans individuals, I don’t feel uncomfortable in my body. I don’t feel like I was born in the wrong body. I don’t have a desire to change anything about my body, outward appearance, or social identity. I’m privileged that I don’t have such conflicts. And it should also be noted that not all trans people adopt a ‘born-in-the-wrong-body’ narrative. Indeed, important aspects of queer theory critique ‘born this way’ narratives for both gender and sexuality.

My ‘genderqueer’ identity, as I have come to call it, defies the strict, medicalized cis/trans binary.

So, you ask, what does ‘genderqueer’ mean? That’s difficult.

Like many words associated with identity, defining it is nearly impossible because it means different things to different people. ‘Genderqueer’ is a newer word, having emerged in the 1990s, and remains in flux. It’s specifically adaptable and flexible. At its core, ‘genderqueer’ involves queering or subverting and challenging prevailing mores related to gender, specifically, but to life more generally, too.

For me, ‘genderqueer’ allows for gender to be the always-complex, always-weird, always-illogical thing it is, and ‘genderqueer’ says that I recognize such.

‘Genderqueer’ describes my maleness via daily doses of testosterone. Physicians first prescribed this medication about twenty years ago when I was a teenager in order to protect my overall health and to promote healthy bone growth. My body has never made testosterone due to Neurofibromatosis and a resected brain tumour when I was 4 years old. Thus, my body hair, my deep voice, my balding and thinning hair, basically everything about me that is physically male, are all the results of prolonged medication. This same medication forever prevents me from having biological children. Because of other problems affecting my bones and chronic migraines, I have never been able to play sports or run or be outside that much – and didn’t really have an interest in doing so.

In a certain sense, then, even the opportunity to be cisgender was taken from me.

‘Genderqueer’ describes a disconnect, that while I’m read as a man, I don’t feel like a guy whatsoever – whatever exactly that means. It’s intangible. I don’t feel a connection between how I feel and think and then between what mirrors say I look like—and I don’t long for there to be a connection.

And just as Dr. Eric Anthony Grollman writes in their article, I have never felt comfortable in male or female spaces. Although as a child, I did fit very comfortably in adult spaces. People my age were either bullies, boring, or both. I also never saw a need for any of the popular toys: Power Rangers, toy trucks, superheroes, and the like never caught my interest. They were boring. Toys gendered as for girls were equally uninteresting.

‘Genderqueer’ includes that in elementary school I didn’t understand why people started talking about dating, boyfriends, and girlfriends. It seemed weird and a waste of time. A psychologist asked me, ‘You don’t have posters of Britney Spears? You don’t turn your head when a pretty girl walks by?’ No, I didn’t. I didn’t exactly understand why she was asking. But I remember knowing that such behaviours were objectifying; although, I lacked that vocabulary back then. Now ‘genderqueer’ even encompasses my sometimes attraction to masculine-presenting men. And my desire for what could mostly be described as an asexual life-long, monogamous relationship based on intellectual, psychological bonds. (A quotation comes to mind: ‘Relationships are simple. I take care of you. You take care of me.’)

I was clearly, very genderqueer, subverting all standards, long before I knew the word or even the concept.

‘Genderqueer’ includes how I have often cringed a bit whenever ‘sir’ or ‘mister’ have been directed toward me. Any kind of gendered language makes me feel kind of uncomfortable and self-conscious. Indeed, one factor that motivated me to get a doctorate was that ‘Dr. Pegoda’ is fully gender neutral! I often like using ‘AJP’ instead of ‘Andrew’ for similar reasons.

Finally, ‘genderqueer’ is even able to describe my worldview and how my mind works. In general, I have always preferred being inside and studying. People try to box me in as a liberal. I am not liberal. I'm far too radical, too queer, too feminist, too disabled, too unique, too me, too educated, too everything to be ‘liberal.’

And this takes me back to the concept in 2007 in a wonderful university class with Dr. Barbara Hales that began my journey towards discovering that people have the power to decolonize gender, that people don’t have to be either a man or a woman. My ‘genderqueerness’ wouldn’t exist without knowing Virginia Woolf’s concept of the ‘androgynous mind,’ the mind necessary for creativity and freedom, or without knowing the text Orlando, in particular Sally Potter’s 1992 film adaptation of Woolf’s novel of the same name.

In Potter’s Orlando, Orlando’s (Tilda Swinton) life shows how society expects men and women to behave and why such expectations are ridiculous. Halfway through, Orlando, having been an androgynous man, wakes up a woman, and without hesitation says, ‘Same person. No difference at all, just a different sex.’ While Orlando is indeed the same person, society immediately treats her as an inferior, even declaring her legally dead because she doesn’t have a father, husband, or son.

Orlando concludes with a flying angel (Jimmy Somerville) singing ‘Coming’: ‘To be here, to be now / At last I am free / Yes at last, at last / To be free of the past / And of the future that beckons me / … Here I am / Neither a woman, nor a man / We are joined, we are one / With the human face.’ This song warms my soul and provides a profound liberation and hope.

Instead of ‘trans’ generally encompassing nonbinary, gender nonconforming, intersex, androgynous, and other ‘misfits,’ we must break the cis/trans binary and make ‘cis’ and ‘trans’ more of a spectrum. We also need to further realize how much people across this spectrum have in common.

We already recognize that biological sex is a socially constructed spectrum, with no one being 100 percent male or 100 percent female.

Categories of sex and gender are complicated and confusing for everyone. Always. With thought, gender only becomes more and more byzantine. People need to learn there are options outside of cis/trans male and cis/trans female. Such will increase acceptance and visibility. In return, this will increase the number of people who identify outside of cis and trans – merely because they know it’s a safe and viable option.

Words have great power. Words can help us discover and embrace are experiences and feelings. ‘Genderqueer’ encompasses my politics, disabilities, histories, outlooks, desires, uniqueness, thoughts, and lack of place. 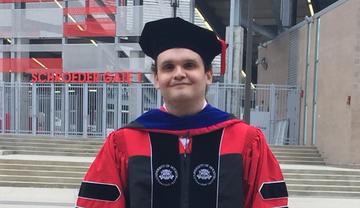