On the Elsewheres of Modern Greek Literature

The event organised by Dimitris Papanikolaou, Kristina Gedgaudaite and Maria Boletsi set a superlative stage of encounters. In a brimming day and a half, it encompassed a remarkable breadth of reflections on the state and future of Greek Studies, setting into motion dialogues that spilled over far beyond the confines of Oxford walls and that continue to ferment and yield profusely.

As a philosopher committed to the potential of literature and as a Greek invested in the literary and cultural production of my imaginary homeland, I could not but welcome the invitation that was extended to me to participate in the first iteration of a project replete with promise. The decision to discuss Cavafy, the most widely read of the Greek poets, had nothing of the desire to affirm a tradition and a pantheon, and even less of the desire to append and join my voice to the chorus of tired, albeit tirelessly panegyric voices, that eulogise the glory of Greek letters. I was relieved that not even a whisper of eulogy was heard over the two days of the event. And I was moved by the reception of my reflections, that tried to account for the fact that the most central of Greek authors is also an author of margins, an author who writes from and of an ‘elswehere’ and an ‘elsewhen’, weaving a hetero-chronotope that will have the most profound rippling effects.

I was particularly interested in this gesture, since the very exchange of the event’s two days, an exchange as significant and attuned to the present and future of Greek culture as any that could have taken place in the Athenian metropolis, was conducted in Oxford’s ‘elsewhere’, on the very eve of Britain’s political secession from Greece and the rest of the continent. The topicality of the event, its currency and topology should not have been allowed to go unnoticed – and they were not. I am confident that the dissemination of thought and practice that the event has set into motion will carry the hetero-chronotopic conditions of its impulse.

What follows is the closing on my paper, the full version of which you can find here.

“Cavafy never overcomes Alexandria. There is no dialectic Aufhebung of his confinement. There is however an affirmation of this confinement and this affirmation is poetry. Cavafy will not stop oscillating between confessional resplendence and concealing self-pity. He will never abandon Alexandria. At the same time, he will affirm this oscillating movement, and with it the cancelled, frustrated ‘outside’ of the city, annexing in this the city plan of his invisible Alexandria. The outside is in-corporated into Cavafy’s incarceration and this incoproration means indeed that his confinement is both topographic and visceral; it is both city and flesh (Leontaris, 15). And only under those conditions can one say for Cavafy il n’y a pas de hors-ville, where city is text.

We have followed a number of vectors that carry the flights of the elsewhere and elsewhen in Cavafy’s poetics. Speaking for myself, the experience of this experiment has delivered respectively two major hermeneutic planes. Cavafy’s heterotopic, ‘no-outside’ vision appears now transfixed on an observable universe that expands at the speed of poetry’s light to encompass within its horizon every distant star that his youthful aspiration dreamt of. At the same time however, the universe itself expands at an even greater rate: Cavafy ages, an ever-more insular star, his night sky grows darker. His heterochronic transports are devised to counter this oscillating process. The lines of flight of his elsewhens enable him to reunite with those receding stars, personal and historic, that are the source of all meaning in his poetry, countering the no-outside of the infinite voiding space with the no-outside of a line.

I believe that our collective predicament, on every possible plane, is closer to Cavafy’s than ever before. I do not know whether contemporary Greek literature assumes the weight of its hetero-chronotopes. Those authors that I count among my friends, and who write beyond the borders of Greece, are for the most part, I feel, somewhat too keen to cloak themselves in the neutrality of cosmopolitanism. Similarly, I fear it cannot go without mention, if Britain is about to enter tonight onto the global fray as an autonomous actor, if it is able to entertain this glorious illusion that feeds on the most vacuous colonial legacy, it is because it never engaged meaningfully with its hetero-chronotope, its elsewhere, that is Europe.”

Georgios Tsagdis is Fellow at the Westminster Law & Theory Lab and teaches at Leiden University, the Erasmus University Rotterdam and the Architectural Association. His work operates across theoretical and disciplinary intersections drawing on 20th Century, Contemporary and Ancient Greek Philosophy. His Archeology of Nothing, an investigation of the history of occidental ontology, is revised for publication. His essays have been published in various book collections and international journals, among which Parallax and Philosophy Today. His editorials include special issues for Azimuth (‘Intersections: at the Technophysics of Space’), for the International Journal of Philosophical Studies (‘Of Times: Arrested, Resigned, Imagined)’, as well as a collected volume on Derrida’s Politics of Friendship, with EUP. In the years 2014-19 he was the convener of the Seminar of Neoplatonic Studies, an intercollegiate study and research group, hosted at the Warburg Institute, London. 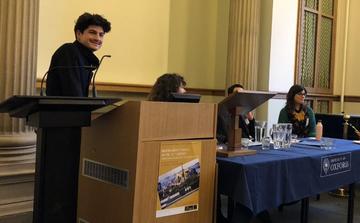