One is not born, but becomes a woman

Simone de Beauvoir’s statement is one which is constantly referred back to in gender studies to question the construction of gender identity. Although it helped to spur on the second wave of the feminist movement, theorists such as Judith Butler have been instrumental in developing ideas around gender construction by also problematising the essentialism that has been awarded to sex. Despite providing valuable groundwork in the discussion of gender identity and construction, more recent theorists such as bell hooks and Monique Wittig must be applauded for highlighting that sex too is a social construct which can be demonstrated through the real life experiences of the trans community. In this piece I will demonstrate how the original consolidation of ideas from de Beauvoir in the early 20th century has been adapted and nurtured by Butler to adjust to the ever-changing world we find ourselves in. The field of gender studies has been and still is a growing field, constantly transforming itself as more trans and gender non-conforming experiences come forward to challenge the dominant norm. De Beauvoir represents the first consolidation of this dialogue which Butler has subsequently added to improve our understanding.

Simone de Beauvoir begins her analysis by asking why and for how long women have been regarded as inferior to men. De Beauvoir argues that historical events have led to women being subjected as weaker by the stronger, a role taken on by men which can be traced back to the work of Thomas Aquinas in which he referred to women as imperfect men based on a false inspection of anatomy. As a result; “ humanity is male and man defines woman not in herself but as relative to him;”  and consequently women are shunned into the role of the other, where as men are consequently named as both the positive and neutral terms for humans. De Beauvoir states that although there are biological differences between the sexes, women only become women because of the circumstances of their society, leading her to the conclusion that the facts of biology take on the values of social norms. Therefore, it is not nature that defines women, rather she defines herself by dealing with nature on her own account in emotional life.

Here radical and Marxist feminists within the feminist third wave diverged with the previous premise, demonstrated by Butler who postulates that if gender is socially constructed and not a direct result of one’s sex, there can also be multiple interpretations which have the result of gender becoming an artful skill. Furthermore, gender can be seen as a discursive means by which one's sexed nature is produced, making it prior to culture suggesting that our bodies are passive media on which cultural meanings are inscribed.

Countering this, de Beauvoir and other second wave feminists may have argued that sex is biological whereas gender is a social construct; hence an individual can appropriate an assigned gender but also adopt others, forming the basis of Butlers concept, performativity.

Another theorist that Butler draws on is Jacques Lacan who argues that gender and sexual identity are learned through identification and language, providing a model for how gender roles are provided, which de Beauvoir and Butler do no address. Lacan productively complicates the idea that biology determines sex and gender, arguing that children choose their identity by learning difference in language and social conventions or from failing to evolve an identity which adequately fits into hegemonic ideals. Language acts, in Lacan’s formulation, as a symbolic order whereby rules are conveyed, reinforcing laws around sexual organisation that children eventually submit to in order to belong in society. This concurs with de Beauvoir's conjecture that one becomes a woman after birth, by submitting to language rules which construct our identity.

Another theorist who built on the consolidation of ideas be de Beauvoir was Monique Wittig who noted that a person cannot be signified without the mark of gender within language. She argues that we take our biology to be the cause of our oppression; however, this cause of oppression is only the mark imposed on us by our oppressor - men. Women do not actually exist but are just a political and ideological formation by which those ‘designated’ women are negated due to what Wittig terms a “power-knowledge discourse”.

This is evidenced within grammatical structures as people's thinking about objects are influenced by the grammatical genders that their language assigns to an object therefore, a different language can create a different perspective about an object. In a linguistic study, researchers created a list of twenty-four objects which had opposite genders in Spanish and German, and asked the different participants to generate three adjectives for each item on the list. Across the board, gender influenced the participants judgements for example, when discussing a bridge, Spanish speakers will describe them with masculine words such as strong whereas German speakers will use more feminine terms, consequently changing not just how the object is perceived but assumptions how it functions due to the assigned gender. This supports de Beauvoir’s claim of the socially constructed nature of gender but also goes further to include sex.

This was also argued by recent theorist Michel Foucault who, when examining sexuality in the nineteenth century, argued that definitions of sex and gender have changed over time. Foucault proposed that newly imposed repressions of sexuality occurred as words describing sex and sexuality became confined into the home and moved out of the public sphere due to the changing needs of that system. Eventually, women and children were denied any sense of sexuality as they were isolated within the private sphere, thus admitting “there was nothing to say about these things”. Foucault argues this repression is the link between power, knowledge and sexuality whereby sex is condemned to non-existence because it upsets the established law, created by those with power: men. As a result, definitions of sexuality are shaped by power-knowledge discourses, defined by those who do the speaking, thus holding positions of power.

The power-knowledge discourse around sexuality can be evidenced in the work of bell hooks who demonstrates how it has provided an analogue for processes of colonisation. hooks argues that sexuality was used by colonialists as a force to subvert power relations, utilising images of black men as rapists to maintain racist domination by implying that black men must be controlled.

Dorothy Roberts helps to elaborate on this by arguing that black women's bodies are still regulated due to powerful stereotypes, created from the power-knowledge discourses, consequently denying them their humanity in order to justify white supremacy. At the time, colonists argued that black bodies were inherently vulgar and that black women were diametrically opposed to the prevailing vision of true women, placing white women on a pedestal whilst justifying oppression. Butler's first argument is in this sense reinforced, showing that those in power produced the concept of gender in order to create a sexual hierarchy and solidify their position and power. As a result, the statement that one becomes a woman (albeit reluctantly) is upheld as those in power have constructed the notion of women to protect their position undermining biological claims of womanhood.

Additionally, we can see the work of power-knowledge discourse and the socially constructed nature of gender within the emergence of the trans community. Janice Raymond has controversially stated that patriarchal structures (the site for power-knowledge discourse) have introduced gender reassignment surgeries as a means of controlling gender stereotypes and maintaining the hegemonic ideal, thereby acting in the interests of power holders. However, we must how problematic this statement is as lots of trans individuals greatly benefit from gender reassignment surgeries and theories such as these have only gone to produce the ideology fuelling dangerous Trans Exclusionary Radical Feminist groups. Because transgender individuals cannot be described within the nouns given by the power structure, threatening the sexual hierarchy and must be amended. This is further displayed in the normalisation of intersex children as they do not fit the binary.

When we look back on the work and theories from gender studies to this point, we must conclude that de Beauvoir was a pioneer of the time and agree with the statement that gender is socially constructed. However, even when we take de Beauvoir’s historical position into consideration, I believe that her statement does not go far enough to encompass the aims of a truly intersectional feminist movement. As we have had more freedom to explore not just our immediate world but also the variations of sex and gender across the globe, we can see that both sex and gender are socially constructed, imposed on us due to power-knowledge discourse. Such a realisation would not have been possible without the de Beauvoir’s original consolidation.

Meriel Colenutt (she/they) is a 22-year-old, second-year student at Oxford Brookes University studying joint honours sociology and politics. One of her favourite fields is gender studies and as a member of the LGBT community, she strives to understand theoretical debates so as to apply them to the world around her. This has been particularly useful in her part time job in Barnardos around othering and identity construction. She hopes to apply her studies and work with young people in the future. 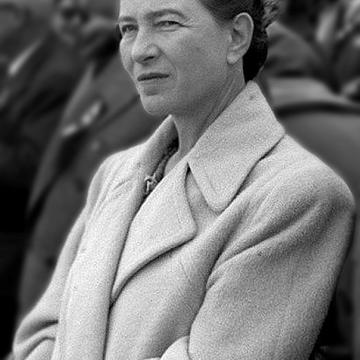