Did you know that Magpie Lane in Oxford was originally called, excuse our language, Gropecunt Lane? Or that in 1355, a whopping sixty three scholars were killed by townspeople in a row that started over ale? How about the medieval anchoress (religious recluse) who lived in a small cell in a church off the beaten track in Iffley?

All of this and more was covered in the inaugural Oxford Medieval Church Crawl on Saturday 1st December - a tour of some of the medieval churches and holy spaces around the city of Oxford and surrounding villages. We are two DPhil English students - Rebecca, working on classical reception in late medieval poetry, and Eleanor, working on textual materiality in late medieval literature. In early Michaelmas term we floated the idea of a medieval church excursion to some interested medievalists, initially only half seriously (the promise of a mulled wine conclusion was a focal point), but the idea and event gained traction and took shape. We took to Twitter, mailing lists, TORCH, and eventually the tour was born - and on Saturday 1st December a small group visited five medieval churches, beginning in the city centre and then moving further afield.

The Crawl began at the University Church of St Mary the Virgin, a church which arguably represents a genesis for the University of Oxford. Despite the light drizzle, spirits were high and we set off into St Mary’s, where a church has stood since 1086. The building of the congregation house, built around 1320, was used as a centre for university governance, teaching and graduations. The Old Library, too, was built to support the university’s teaching in 1320, but in 1488 these books were moved to Duke Humphrey’s Library - now part of the Bodleian Library. The space was used concurrently for academic lectures and church services until as late as 1420. Eleanor noted a consecration cross in the Chancel, and throughout the Church Crawl we saw many similar symbols.

The University Church’s website has a great page on the history and heritage of the Church:

We visited St Edmund Hall next, where Professor Henrike Lӓhnemann gave a spectacular tour of the Norman crypt and church-turned-library (now deconsecrated, although the crypt remains consecrated). The crypt is still used for special events today such as Compline. The crypt is suffused with the weight of its medieval history, with its chilly stone atmosphere and crumbling carved symbols, the meaning of which we could only guess at in some cases. We were especially fortunate for Professor Lӓhnemann’s involvement, as she concluded the ‘Teddy Hall’ stop with warm mulled wine and homemade, festively spiced biscuits (described as an ‘absolute treat and delight’ by one of the attendees!).

From St Edmund Hall we walked to Christ Church, pausing at Magpie Lane, where Eleanor explained the history of the passage. The road was formerly called Grope, or Gropecunt Lane, and is listed as such in John Speed’s 1605 map. Its name denotes their use by female sex workers.  Many cities including York, London, Norwich, Bristol and Warwick had similarly named streets, most of which can still be found today. The names of these lanes were gradually erased and many now bear the name ‘Grove’ or ‘Grape’ lane.

Christ Church was equally interesting: a volunteer at the Cathedral, Christa Menmuir, gave us a tour of the medieval significance of the Cathedral. Just as the University Church of St Mary represents the genesis of the University, the site of Christ Church Cathedral can be seen as the starting point of life and worship in the city of Oxford. The Cathedral stands on the site of Frideswide’s Priory, the patron saint of Oxford. The Priory that Frideswide founded no longer exists, but Christ Church Cathedral contains many exemplary medieval features. Frideswide is thought to be buried somewhere beneath the Cathedral, and her tomb stands within the structure. The cloisters outside the Cathedral are part of the original Priory – and when the central plot was excavated, human remains from the eighth century were found. Christa also showed us the famous Becket window, which tells the story of Archbishop (and later Saint) Thomas Becket’s assassination within his own Cathedral, on a tumultuous night on 29th December 1170. Becket’s face was removed so that the window might be spared King Henry VIII’s destruction, but in 1981 the clear pane of glass was replaced with a pink pane to refer to skin.

Christ Church has a webpage detailing the Becket window.

Our journey was then helped by a fleet of taxis, which bore us to St Mary’s Church in Iffley. The church here is a fascinating example of medieval architecture and a monument of life in the Middle Ages. An anchoress (religious recluse) named Annora, a high born widow, lived at St Mary’s between at least 1232 and 1241, and a thirteenth century grave slab still sits along the wall at the place where her cell would have been, between the yew tree and the chancel.

From Iffley the taxis took us to our final stop: St Margaret’s Church, Binsey. The present church has a Norman foundation, although the majority of the church which stands today dates from the twelfth century. The most striking medieval feature is outside the church, in the form of Frideswide’s Well. In Frideswide’s hagiography, she flees a King who is pursuing her romantically, but is then struck blind for his sins. Frideswide’s prayers brought forth a healing spring, whose waters cured his blindness, and this spring became Frideswide’s Well at Binsey. This well also became a focus for local pilgrimage, and King Henry VIII is known to have visited.

Then finally - to the Perch pub, where we enjoyed a warm mulled cider, snacks and a well-deserved rest.

We were struck, both in our preparatory research and on the day, by the narrative threads which wound their way through our Medieval Church Crawl: Frideswide, the seventh century saint who founded a Priory at Christ Church and fled to Binsey; architectural echoes at St Edmund Hall and Iffley; and the sheer number of connections between churches in the form of fonts that moved home,  recurring medieval figures, and stained glass motifs.

The churches that we visited constitute a very small number of the medieval spaces around Oxford. Those that we could not visit we have incorporated into an interactive trail map, hosted by TORCH. Oxford Stories is an online, open access platform for exploring Oxford - watch this space for the Medieval Church Crawl map! You can see other fantastic trails here.

The feedback from the event was extremely lovely - two attendees wrote:

“A short note to say a very big thank you for an absolutely splendid Medieval Church Crawl. We discovered the event on the TORCH website - and were delighted to find that it was open to all. Your brilliantly master-minded event was first class, whisking us back to medieval Oxford via perfectly selected buildings - encompassing the intertwined story of Town and Gown.

We appreciated the different 'voices', and the opportunity to see places not normally accessible to the public. We thought the thread of association with Frideswide a brilliant means of keeping all the information together. We shall keep the splendid trail hand-out as a wonderful souvenir of a special day. We are all very lucky that you created such a fabulous morning, so generous and thoughtful. Count us as your groupies, and converts to Medieval Oxford.”

Thank you to everyone who came! Further, thank you to the Oxford Medieval Society for kindly sponsoring the event, and TORCH for their support. 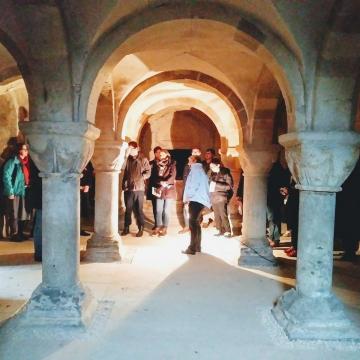