One of the winners of the 2016-2017 edition of the AHRC-TORCH Graduate Fund was the Oxford Medieval Graduate Conference. In this post Henry Drummond (DPhil Music) and Sian Witherden (DPhil English), two members of the organising committee, tell us more about the outcome of the project and about their experiences with the organisation of this interdisciplinary conference.

The Oxford Medieval Graduate Conference is an annual, two-day interdisciplinary conference run by and for graduate students and early career researchers. It presents an open, friendly platform for graduate medievalists from a variety of disciplines to share their research upon a common theme. Conferences in previous years have been based upon various topics, from ‘Light’ (2008) to ‘Colour’ (2015) and ‘Sleep’ (2011). The theme for 2017—the conference’s 13th year running—was ‘Time’.

This enticingly rich selection of papers was summarised through two keynote presentations that drew upon many of the themes addressed over the two days. Prof. David D’Avray addressed the multitude of issues surrounding time’s ontological status in his Plenary: ‘Questions about Time’. The conference was brought to a close with Prof. Eric Stanley’s warning on time’s finality through his Keynote Address: ‘Indefinable Time Experienced in Medieval Living, Sinning, Doubting, Dying’.

This conference would not have been possible without the generous support of the AHRC-TORCH graduate fund. With this grant, we were able to host the event at Merton College, which was a perfect venue for a conference on time in the medieval world.

Merton College was founded in 1264 and several of its medieval buildings still survive, notably Mob Quad, the oldest quadrangle in Oxford. Thanks to Julia Walworth we were able to offer guided tours of the Old Library in Mob Quad, which dates from 1373. During these tours, one of our committee members, Sarah Griffin, introduced our participants to the medieval astrolabes housed in the library. Astrolabes were used to measure the positions of celestial bodies and even calculate local time, so they were particularly appropriate for our conference theme.

Hosting the event at Merton also allowed us to offer a conference dinner in the historic dining hall, which still has a door with medieval ironwork. There are sculpted Zodiac Men on the nearby Fitzjames Arch, which was yet another nod to the theme of time.

Having such an exciting and well-suited venue undoubtedly helped us to attract such an international audience. This year, speakers came from all over the UK and from Germany, Ireland, Spain, Switzerland and the USA. As such, this conference has once again reinforced Oxford’s place as a centre for medieval graduate student interaction, and we are grateful to the AHRC-TORCH fund for helping this happen. We hope that next year’s conference on the theme of ‘Animals’ is just as successful. 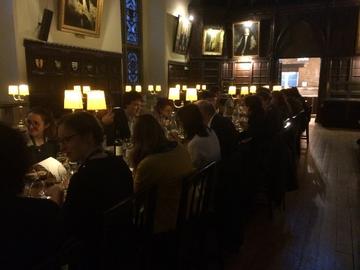