Paul Gilroy at All Souls: Writing the History of Antiracism

Paul Gilroy at All Souls: Writing the History of Antiracism

The Oxford Programme for the Future of Cities, like most seminar series, does not usually restrict tickets for its events. Such was the level of anticipation, however, for a lecture by Paul Gilroy (Professor of American and English Literature at King’s College London) on 2 June at All Souls College. Gilroy is chiefly known for his sociological study There Ain’t No Black in the Union Jack: The Cultural Politics of Race and Nation (1987) and his literary work The Black Atlantic: Modernity and Double Consciousness (1993), but it was his more recent analysis of postimerial British culture, After Empire: Melancholia or Convivial Culture(2004), which particularly came to mind last week.

If The Black Atlantic argued for the methodological necessity of intersecting European and American historico-cultural contexts, Gilroy’s Oxford lecture, entitled ‘Justice and the Racial Nomos or how should we write the history of antiracism?’, began with a self-conscious declaration of ‘parochialism’. The current popular discourse on racism and antiracist resistance, he suggested, is repetitively American. We all know about the tragic deaths of Michael Brown in Ferguson and Freddie Gray in Baltimore, but for Gilroy there is an important yet largely forgotten parallel history in Britain.

For his latest book project, Gilroy has been uncovering this archive – a series of reports, concerned mainly with race, rioting, the police, and urban space. Many of these obscure publications, some of which were written by Gilroy’s late friend and colleague Professor Stuart Hall, were put out by the Greater London Council (GLC) in the 1980s. Moving from image to image, document to document, Gilroy informed the audience about the political and cultural activities of various antiracist groups, particularly around the time of the 1981 Brixton riots (he discussed, for instance, the dub poet Linton Kwesi Johnson and the artist/filmmaker Isaac Julien).

Another strand of his argument, which drew upon After Empire, referred to that unusual word in the lecture’s title: nomos. Gilroy explained that this Greek term is often translated as law, but for him it signifies the ‘spatialisation of power’ – this enabled him to show how Britain’s colonies provided ‘laboratories’ in which spatial ‘technologies of control’ were experimented with before being implemented back home. The ‘kettling’ which took place during the 2010 student protests, as he pointed out in his conclusion, is testament to the continuing authority of these techniques.

If, as he repeated several times, #solidarity is not enough, then Gilroy’s impassioned and intelligent critique aims to provide a more rigorous solution to the persistence of racism in contemporary Britain.

Ed Dodson is a DPhil Candidate in English. His thesis is entitled ‘The Occluded Persistence of Empire in Contemporary British Fiction, 1979-present’ 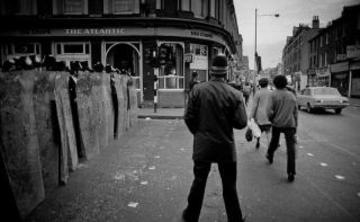