On 14 March 2020, a strange spectacle took place in the churchyard of St-Peter-in-the-East: two women clad in red were sitting on a tomb vowing to repent – in medieval French; on a picnic rug at the feet of the statue of St Edmund, three figures were reclining at some distance from each other to nip sherry and eat Turkish delight while occasional blasts of the trumpet heralded a professor of drama addressing an audience of curious onlookers on Queen’s Lane. All this captured on camera with numerous interruptions to shelter from rain showers or repeat scenes which had gone off the rails. What was happening was the attempt to document an exciting experiment in performing part of a Mystère de la Passion (medieval French Mystery Play) on Mary Magdalen which had been scheduled as part of the postponed Oxford Medieval Mystery Cycle 2020 and what had been scheduled as the first outdoor rehearsal turned into a scratch performance. An extended version is now scheduled to take place on 24 April 2021. Click here for more information).

Present were the Director David Wiles (announcing the scenes and reading in missing parts); members of the cast (not all could stay for the recording): Alex Marshall (Simon, the Pharisee in whose house the banquet takes place at which Mary Magdalen approaches Christ), Laurence Nagy and Imogen Lewis (Mary Magdalen 1&2; originally, there were four people cast for the role to show different facets of the character), Laura Laube (guest at the feast, indignant about Jesus allowing Mary Magdalen to anoint his feet), Charlotte Cooper (French medieval literature specialist, one of the guests at the banquet and reading in some of the missing parts), Henrike Lähnemann (Director of Oxford Medieval Studies who organised the recording, heralded the performance on the trumpet and picked up a cameo performance as guest at the banquet), Jessica Qiao (providing the musical entertainment for the banquet), the statue of St Edmund (Christ, stoically standing in for the student scheduled to play Jesus who had already left) plus ad hoc recruited spectators to fill in the roles of further guests at the feast. Filmed by Natascha Domeisen on the camera and zoom object of the Faculty of Medieval and Modern Languages and sponsored by the Oxford Medieval Studies Programme of TORCH.

The filmed scenes from the Mary Magdalen play can be seen here.

After the scratch performance, the members of the cast assembled in Henrike Lähnemann’s office and reflected on the rehearsal process, its challenges and surprises. Questions discussed include: How to reflect the theme of penitence? How to communicate with an audience which predominantly will not understand the language? What are the particular challenges and chances of working with a group mixed from students, community and professionals?

You can watch the discussion here. 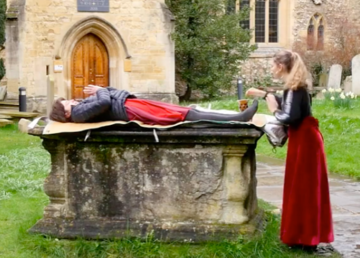