Pharmacy as a Laboratory of Modernity

Pharmacy as a Laboratory of Modernity | Barry Murnane

As Science Museum Research Fellow Barry Murnane spent the first half of 2016 working with the curators and experts of the Wellcome Medical Collections at the Science Museum in London, exploring the material dimensions of medical therapy in the nineteenth century.

The project started out with the aim of assisting the Science Museum in redeveloping their Medicine Galleries for their reopening in 2019, but in the process, he discovered the museum’s huge collection of 19th-century inhalation devices. ‘I was fascinated to see what these small, apparently unremarkable objects could say about medical science of the era, and society more generally’, he says. ‘Sometimes it’s the supposedly boring objects which tell us more about the experience of medical history, from the bottom up.’

While planning the new exhibition spaces continued at pace, the project became centred around the most unlikely of objects: the Dr Nelson’s Inhaler, the forerunner of modern asthma inhalers, used to treat those suffering with lung disease in the 19th century. Generally cheap, mass-produced, and distinctly ordinary looking, these had received little attention from researchers or curators in the past. Inhalers tell a story that links the cultural and social elite – writers like Ann Radcliffe, Charles Dickens, or Marcel Proust – to the lives of ordinary men and women. With increased industrialisation came greater air pollution (the infamous Victorian ‘smog’) and the creation of a huge working class who lived in squalid, damp conditions and worked in dangerous environments.

So an increase in pulmonary disease could be seen as a direct side effect of modernity, and it is clear that it was the poorest and least powerful who bore the brunt of this. The mass-produced Dr Nelson’s inhalers were affordable enough to be used in poor hospitals, and so we have extensive records of their use from the doctors who worked and researched there. ‘These sources paint an intimate picture of the widespread deprivation and exploitation that caused people to become ill, revealing clearly that the progress made in the Victorian era came at the expense of a great deal of suffering and loss of life.’

The project activities included workshops with lung-disease stakeholders and education specialists, outreach sessions, and public events in Oxford, London, and Germany. Along with pharmaceutical researchers from the University of Hertfordshire, the inhalers were also subjected to modern quality control testing, to discover whether they actually worked. Surprisingly, they discovered that the basic inhalers were an effective method of drug delivery. Although whether this was a good thing or not is debatable; among the tinctures recommended for inhaling through these devices were belladonna and hydro-cyanic acid — a forerunner to the Zyklon B gas used in the atrocities of the Holocaust. Barry subsequently co-published a series of articles based on the work, including on the pharma technology of the Nelson Inhaler in the Journal of Aerosol Medicine and Pulmonary Drug Delivery.

‘This Fellowship gave me access to new methods, new materials, and new audiences. It was a fantastic opportunity to experience and shape – in however small a way – the Science Museum’s new Medical Galleries. These are stories that can engage the huge range of people who walk through the Science Museum’s doors, from young children to adult specialists, for decades to come.’ 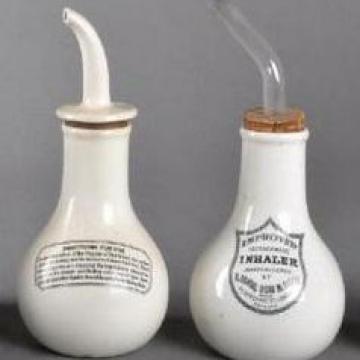