Phyllon is a Greek word for leaf or more generally plant.  So Phyllis is ‘leaf girl’ or something like that.  There was a myth about a Thracian princess Phyllis who committed suicide when her Athenian lover Demophon abandoned her.  She presumably took her name from the Thracian district Phyllis, not from the Greek noun, but the associations of the Greek word shaped elaborations of the myth (trees planted round her tomb wept for her, for instance) and eventually (but apparently too late for inclusion in Ovid’s Metamorphoses) it was said that after death she was transformed into a leafless almond tree: faithless Demophon returned too late and embraced the tree, which then sprouted leaves.

The name is not at all common: about 18 instances, some of them doubtful, in the published volumes of LGPN.  But I note with pleasure that a lady from Ephesus bearing the closely related name Phyllas had a daughter Phyllarion, ‘little leaf’.  It was one of the Greek names that flourished among Greek women living in southern Italy: 5 of those 18 instances are from there, to which can be added no fewer than 50 from Rome itself.  Whence the popularity of the name in Latin poetry: ‘Send Phyllis to me: it’s my birthday’, sings a character in Virgil’s Eclogues (3.76); Horace summons a Phyllis whom he poignantly describes as ‘last of my loves- no other woman will fire me up’ (Odes 4.11).  Those Phyllides belonged to that unlucky class of women whom men sent for to entertain them; when Horace tells a young friend not to be ashamed of his love for a servant girl Phyllis because her ancestry is doubtless regal, he is joking (Odes 2.4).  Rather touchingly, we learn that, when the bad emperor Domitian was assassinated, funeral rites were performed for him by his old nurse Phyllis (low status again).

There is no Saint Phyllis, so the name belongs to that minority of Greek names that survived through literature, not cult.  A popular medieval fiction (already attested in the 13th c.) told how Aristotle was ridden by a dominatrix called Phyllis.  That shocking attempt to degrade the supreme philosopher might have rendered the name untouchable.  English poets, however (innocently ignorant of the legend?), were happy to import it from Latin poetry.  Robert Herrick, for instance, issued an invitation ‘To Phillis, to Love and Live with Him’.  Here the origin of the name is clear.  In documentary sources the excellent E.G. Withycombe warns of a complication:  the name became confused with Felice/Felis, the shortened form of Felicia, ‘so that it is often difficult to decide which name is meant’; she mentions a use of Phyllis as an abbreviation for Felicia.  A by-form Phyllida (which to a classicist is just the accusative of the name) also occurs in 17th c. poets, and indeed is occasionally met today: I cannot say whether it originated in a simple confusion between cases or in some other way.   Like so many names, Phyllis has oscillated in popularity in ways not easy to explain: recovering from virtual disuse in the 18th and 19th centuries to become one of the most popular names in the 1910s, but dropping out of the top hundred again by the 1950s.  It was still popular enough in 1920 to be given to a writer who, however, famously has always disguised it as an initial: the much-loved detective novelist P.D. James. 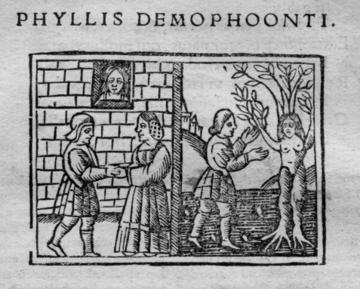