Below, two current History students – Zahraa Salloo and Gil Selby – reflect on these events, and on the life and intellectual legacies of the remarkable pioneer, Merze Tate.

When we are asked to think of the University of Oxford during the interwar period, which scholars spring to mind? For many, Merze Tate would not be a remembered figure. Why? Because of the lacuna in political and intellectual history that has, for so long, consciously obscured black women.

The riveting Astor lecture, delivered by Professor Barbara Savage and followed by a variety of responses from leading academics, discussed the exceptional achievements of the first African American woman to receive a graduate degree from the University of Oxford.

Being a woman studying at Oxford in the 1930s was, in itself, an outstanding accomplishment. Yet, to do so as a ‘coloured woman’, as Tate described herself, was a truly remarkable and mind-blowing achievement. However, what is even more striking is that Tate’s place in intellectual history has been massively overlooked. Certainly, it is an egregious oversight given her ‘forthright determination’ and ‘exemplification of high standards’, as Dr Imaobong Umoren commented in her response.

Despite being fully aware of her racial identity and its implications– ‘I was an interesting freak to the girls…’ –surprisingly, her archives did more to hide herself, rather than reveal it. Albeit she was a devout Catholic, Tate kept the most personal aspects of her identity concealed, as she did with her views on racial politics.

Not only did Tate travel the world twice, as Professor Savage was quick to point out, but she also visited South Africa during the Apartheid era. Tate was clearly a somewhat politically savvy woman, for her lack of espousal of radical black politics during her time in Oxford, and beyond, helped her to maintain a ‘clean record’, in terms of political affiliation.

Interestingly enough, Tate was in Oxford at the same time as the first Trinidad and Tobago President, Eric Williams, and also coincided with Kofoworola Moore, the first Nigerian woman to receive a degree from the University. The Q&A session highlighted the wider public interest in Tate’s time in Oxford: what networks did she form during her time here? How did she cope with the dominating racial hierarchies which were so prevalent in the thirties?

A highly poignant photograph of Merze posed on a bicycle outside the Radcliffe Camera highlighted how the places we wander through every day were home to individuals like Merze;  black women whose scholarly achievements need, and undoubtedly deserve, recognition.

It is an overwhelmingly exciting time to be studying at the University when this nascent field of black women’s intellectual history is being pushed to the fore.

This year’s Astor Lecture, given by Professor Barbara Savage of the University of Pennsylvania, effectively reminded its audience of the continuing need to uncover the stories of those who, owing to their race and gender, do not figure in established historical narratives.

The subject of the lecture was Merze Tate. Tate was the first African American woman to complete a graduate-level degree at the University of Oxford, a Fulbright visiting scholar in India in 1950, and the writer of four groundbreaking books on U.S. international relations and diplomatic history. As Professor Savage made clear, she led an extraordinary life and left a significant mark on her field, but few would be surprised to learn that an African American woman in academia in the early- to mid-twentieth century has been left out of major works of intellectual history.

A common thread throughout was Tate’s determination to be a ‘credit to her race’ and, having heard from Professor Savage of the obstacles she overcame and the work she produced, it seems her objective was completed. Professor Savage’s two-pronged approach, engaging with Tate’s multi-faceted identity as well as her scholarly work, effectively conveyed a more comprehensive understanding of a complex, gifted individual who faced inconceivable challenges in her personal and professional life.

Imaobong Umoren was the first in a panel of three to respond to Professor Savage’s talk; her initial remark deeming Tate to have been ‘pioneering, trailblazing, innovative’ seemed an apt summary.

In both the lecture and a roundtable discussion the following day, there emerged a theme grander than Merze Tate’s individual achievements: the reclamation of the place of forgotten women of color in the study of intellectual history. This was the aim of Toward an Intellectual History of Black Women, the book that Professor Savage co-edited and the topic of Tuesday’s discussion.

In both the roundtable and the proceeding lecture, Professor Savage made a convincing case for the importance of the scholarly work accomplished by Merze Tate among other forgotten black women. She also, encouragingly, suggested that far more work is currently being done to restore the places of various other neglected individuals.

Countless fascinating points were expressed in the two sessions by Professor Savage, the panels responding to her on each day, and audience members. Above all else, I am fascinated to see the works that come out in the coming months and years alongside Professor Savage’s which, by asserting the contributions of forgotten individuals, will reshape our understanding of the field of intellectual history.

Gil Selby is a Masters student in U.S. history at the University of Oxford. He is writing a thesis on the works and impact of the African American writer and musician, Gil Scott-Heron. 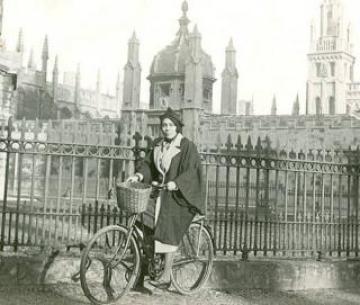