Race and Ethnicity in the Ancient Novel

Race and ethnicity in the Ancient Novel

“One who starts in grace and ends in glory another goddess-born:

Of these I bid you have regard, O Delphi!

To the black land of the Sun will they travel,

Where they will reap the reward of those whose lives are passed in virtue:

A crown of white on brows of black”

So speaks the voice of the priestess of the oracle which sets the adventures of Charikleia and Theagenes in motion.  These two Greek protagonists belong in Heliodorus’ novel the Aithiopika (An Ethiopian Story). This novel forms part of the core of a new literary form which flourished during the first century to the fourth century AD. Five Greek novels came to constitute the canon of this literary form: Callirhoe by Chariton, Ephesiaka or An Ephesian Tale by Xenophon of Ephesus, Daphnis and Chloe by Longus, Leucippe and Cleitophon by Achilles Tatius, and Aithiopika by Heliodorus.

These novels, although varied, all had a common theme: a young, beautiful, highly educated Greek couple after falling in love face many trials and tribulations before finally being reunited at the end of each story. These trials and tribulations usually consist of separation from each other and encounters with the Other.  Their adventure (instigated by kidnappings, shipwrecks, or oracles) thrusts these heroes from the centre, the known Greek world, to the periphery inhabited by crafty Egyptians, degenerate Persians, pious Ethiopians, and mystical Indians.  These diverse ethnic groups and individuals are described through the eyes of our Greek protagonists and narrator, against a backdrop of a long and complex Greek (and Roman) literary and historical tradition of the representation of the Other.

One of the many unique features of Heliodorus’ novel is the concentration on race; the story centres on the mystery of Charikleia’s true identity. The complex narrative unfolds through Odyssean flashbacks told by different (and ethically diverse) narrators. The answer to Charikleia’s identity is finally revealed at the end and lies in the lines of the first oracle. The ‘black land of the Sun’ is Ethiopia and Charikleia’s parents are the Ethiopian king and queen.The queen exposes Charikleia at birth due to her strange white skin. The story becomes Charikleia’s homecoming and her acceptance of the Ethiopian crown ‘of white on brows of black’. The Greek protagonists do not return to the centre but make a home on the edges of the Greco-Roman world.

Ethnicity and fluidity of identity is at the heart of these Greek novels and the novelists themselves; Heliodorus tells us he is Syrian, Chariton from Aphrodisias, Achilles Tatius from Alexandria, and Xenophon from Ephesus (Longus being the odd one out). Like us, the Greeks and Romans struggled to understand the variety of different races and ethnicities around them. How they viewed foreign cultures was tied up with how they viewed themselves, being Greek or Roman was fluid and oscillatory and these terms were constantly redefined, reviewed and scrutinised.

Heliodorus’ work was my first immersion into the world of the ancient novel. I was particularly attracted to the tale because of my own Ethiopian-Eritrean heritage. Like the protagonists of the ancient novel my forced wanderings took me to many countries and places between East and West. My identity was constantly shifting and being reconstructed in response to people and places I encountered -racially I am black, ethnically Eritrean, and culturally British. In the ancient world one can identify as Greek or Roman but be racially and ethnically different from those who inhabited mainland Greece or Rome.

Mai Musié is a part-time PhD candidate in Ancient History at Swansea University. Her thesis focuses on ethnicity and identity in the ancient novel. She also runs the Classics Outreach Programme for the Faculty of Classics at Oxford. 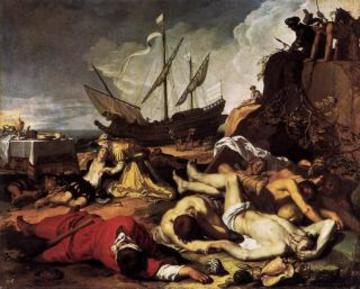