Re-imagining Scandinavia in the World: Colonialism and Race

Re-imagining Scandinavia in the World: Colonialism and Race

On November 18, 2016, the TORCH Nordic Network and Race and Resistance Programme co- hosted a talk by Dr Michael McEachrane, Visiting Assistant Professor at University College London, on the topic of “Re-imagining Scandinavia in the World: Colonialism and Race”. Respondents were Louisa Layne and Elleke Boehmer, and the chair was Eveliina Pulkki.

Aiming to problematize popular stereotypes and general discourses about the Nordic countries in the wider world, Dr. McEachrane’s talk was based on a collection of essays he co-edited with Professor Paul Gilroy in 2014, Afro-Nordic Landscapes: Equality and Race in Northern Europe. He explained that the urgency that lies behind postcolonial projects like his comes from the fact that the ideology of Nordic exceptionalism has by and large promoted Scandinavian countries as the exemplars of “socialist liberal democracy” as well as “the anti-imperialist welfare state in support of refugees and Third World countries”. Discussions on issues of colonialism and racism, past and present, meanwhile, have been eschewed.

Indeed, as he frankly pointed out, the racial images people tend to associate with Scandinavia often feature the “pale and blonde” white person “with Viking ancestry”, and the specific politics of desirability behind this mechanism of (self-)representation has made the reimagining of Nordic peoples and societies difficult but at the same time necessary. To enable such re-imaginations, he first talked about the often ignored colonial history of some Nordic countries, such as the Danish colonies that had been sold to the US at the beginning of the twentieth century, and the Swedish ports and companies that facilitated the transatlantic slavery trade at the height of its cruel development. He then pointed out the lack of consideration on race in current state apparatuses in the Nordic countries, such as the fact that racial backgrounds are usually not recorded and taken into account when state censuses are conducted, exacerbating the problems surrounding racial segregation and employment inequality.

In response to Professor Elleke Boehmer’s questions about different identity narratives coming out of the racial minority communities in Scandinavia, Dr. McEachrane also emphasized the observed generational differences in their identification progresses and reactions to racialization. As he further elaborated, for the first generation immigrants from Africa who have spent their formative years in their birth countries and still see their host countries as foreign lands, the primary identities (religious, ethnic, national, linguistic and etc.) they developed in their “homelands”, rather than racial interpellations such as “black”, tend to be much stronger. In contrast, the younger generations who were born and grew up in Scandinavia would be much more willing to accept being racialized as “black” as this brings them a sense of solidarity but also a sense of belonging with resistance when hyphenated identities such as “black Danes” can be created.

Professor Boehmer also raised an interesting comparative point from Stuart Hall that the word “British”, as opposed to “English”, presents more possibilities for postcolonial subjects, immigrants or ethnic minorities to identify themselves as such, but Dr. McEachrane confirmed that there is no such enabling term in Scandinavia. In response to a range of questions from the audience, he commented on the increasing deployment of popular culture to create solidarity among peoples of color in Scandinavia, and he also lamented the lack of racial diversity in the Humanities in Scandinavian academia.

Flair Donglai SHI is a DPhil in English focusing on the comparative studies of the Yellow Peril discourse in Anglophone and Sinohone literatures. 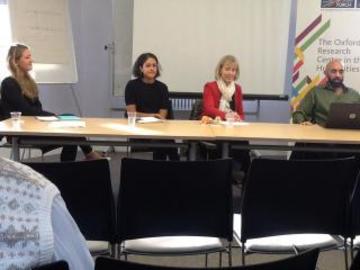