Recent activities for 'Dance as Grace'

Dance as Grace: Paradoxes and Possibilities: led by Sue Jones

The project began by gathering together volunteers from different academic disciplines to explore spontaneous responses to the meaning of the word grace, and to see whether grace held specific resonances for each participant’s individual discipline. Each participant completed a questionnaire. The results were revealing, showing a wide range of expressions and perceptions, depending on the context.

Distinctive areas of Engineering produced often unexpected results. To representatives from Robotics, the word grace generally signalled something significant in relation to ‘gait’: words like weightless, delicate, elegant, fluid, agility, dexterity came to mind, as well as ‘being calm under pressure’ and in relation to the field of Robotics itself, grace could be applied to gentle, effortless motion, using momentum and rotation effortlessly, reacting to disturbances/slips with balance/reaction to recover, efficiency of movement and control-ability, nimble motions with light/soft contacts.

One expert in Walking Robots revealed that ‘there is also a simple mathematical definition of the amount of energy needed to move from A to B (‘cost of transport’)’ and that ‘if a motion is too aggressive or clunky it’s immediately obvious there are limitations of the robot hardware or walking method. We perhaps prefer the word “dynamic” which means a fast type of motion where momentum is needed – as opposed to static and slow gaits which are walks – and needs to have grace to be achieved. There is a clear separation between a graceful robot and clunky and static ones’.

Experts in Biomechanics felt that grace could be applied to energy efficiency, and other Engineers observed that grace could describe a solution to a problem (mathematical or physical) as “elegant”, meaning that it is clever, simple and efficient. One thought that grace referred to a person’s or animal’s smoothness of trajectory, carried out neither too slowly nor too quickly, and appearing to be effortless. ‘Animal grace’ came up frequently.

It is interesting to compare these ideas about the physical properties of grace to those responses that referred to grace’s theological, spiritual or religious connotations:  ‘“Hail Mary, full of grace” conjures up thoughts of something God-given and pure’, or God’s grace – a kind of transcendent force that is evidence of God’s activity in the world.’

Another common feature of the responses was the reference to aesthetics, which came from engineers, geographers, and art historians alike: ‘an aesthetic judgement about movement as smooth, balanced, refined, etc.’; ‘The Three Graces sculpture suggests beautiful movement, even though the image is static’; one participant from Information Engineering related grace to ‘design elegance, ie a neural network design that is simple and compact, yet achieves good results’. Our art historian wrote about a complex aesthetics emerging in the field: ‘The idea of elegance or grace in painting, particularly in terms of line has been a kind of standard that more rough and deliberately non-linear forms of painting have taken to task. At the same time, such grace has moved from expressing something elegant or beautiful (a neck, a tree etc) to assuming a gracefulness in the mark or line itself as art became increasingly autonomous and self-reflexive.’ Our geographer participant explained that Adam Miller on ‘Speculative Grace’, seems ‘to suggest that grace could be something that was much more minor – something like the allure of a feeling of being in the midst of things. Maybe grace has a place in understandings of the aesthetics of everyday geographies.’

All these initial responses will contribute to focussed discussions in Trinity Term 2021 TBA.

I gave a lunchtime presentation on the outlines of the Grace project to staff and graduates in English and in Classics at St Hilda’s. A lively discussion produced many further responses to: linguistic and semantic distinctions, areas of theology, classical myth, notions of dance practice and questions of spatiality, stillness, mechanical and non-human movement, the ‘paradox’ of grace. We also discussed the images below ...

3. Responses to dance on video.

Participants were sent a number of video clips of different styles of performance dance and responses recorded. Results TBA.
Our partner, Yorke Dance Group provided two of the videos: solos by Robert Cohan. Here are a couple of images to conjur the flavour of one of the solos.

Jon’s solo (image 1 & 2) was inspired by drawings by Andreas Vesalius (image 3) from the 16th century. 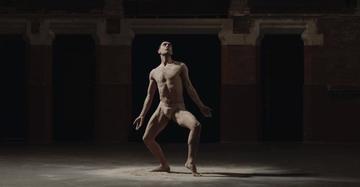 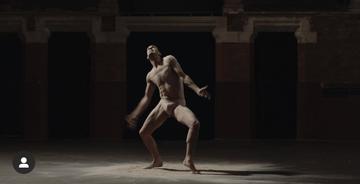 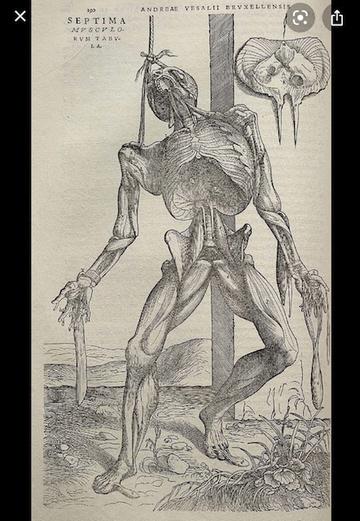 We will discuss the ‘live performance’ of the solos in Trinity 2021, compared to online recordings, and discuss ideas of grace, anti-grace, mechanical grace in this context.

Back to main Knowledge Exchange project page of Dance as Grace: Paradoxes and Possibilities