Reflections on 'Modern Greek Studies in the 21st Century'

The urgency of revision of the EU’s policies and actions regarding migration, which since the EU-Turkey deal of 2016 seemed temporarily tempered, was rekindled in the last week of February 2020 by the demanding migrant presence at the Greek-Turkish border. Despite currently otherwise occupied media, this situation is of course still pressing. Easily distracted media attention, jumping from one declared ‘crisis’ to the next, neglects the fact that these complex problems – because these ‘crises’ are symptoms of the malfunctioning of the current organisation of our global society and the untenability of dominant systems of power distribution rather than ‘disruptions’ of a stable and properly-functioning ‘normal’ –  need lots of collective thinking, sustained attention and long-term solutions. While the next declared ‘crisis’, in the form of the global outbreak of the virus Covid-19, again backgrounds the need for a sustainable, collective EU migration policy, I look back on the conference ‘Modern Greek Studies in the 21st Century: Perspectives and Practices in Cultural Analysis’, which took place on 31 January – 1 February 2020 and brought a variety of Greece-oriented minds together, touching on many of these interrelated issues and inspiring the type of collective thinking that is necessary to solve problems, change systems and imagine futures.

While at the end of the second conference day Stratos Kalafatis’ mesmerising photographs of the Aegean archipelago hopefully offered the tired eyes of my fellow conference attendees some rest, I presented the topic and results of my last research. During this research I looked into the intricate functions of the use of the maritime element in the visual representation of Greece in the photo series Archipelago by Greek photographer Stratos Kalafatis, in light of recent shifts in the symbolical meaning of the Mediterranean and Aegean Seas towards ‘graveyard’ and ‘liquid borderland’. First, I pointed out that the sea has always been a constitutive element in literary and visual representations of Greece. Its rich associative potential and metaphoricity lends itself well for narrations of the Greek nation, spanning from primordial Homeric narratives to tourism promotion and contemporary political speech. Through an analysis of a selection of the photographs, informed by notions such as ‘utopia’ and Michel Foucault’s ‘heterotopia’, and attentive to the affective operations of these artworks on the viewer, I primarily addressed the lack of indexes of human histories in Archipelago. I read this lack as a neglect of the political responsibility of acknowledging the entanglement of EU border policy and contemporary migrant stories unfolding in the Aegean region. In the second part of my presentation, inspired by Édouard Glissant’s archipelagic thinking, I considered in what way Archipelago might form an answer to overarching questions which have become pressing in our current configuration of reinforced borders and failing EU immigration policies. I concluded that despite the aforementioned neglect, Archipelago resists the traditional use of the sea as a constitutive element in representations of Greece; for rather than connoting the Greek nation, it connotes other archipelagos and coastal regions across the globe and thus offers an alternative to thinking the territorial structure of the world.

As one of the last speakers of the conference, the topic of my presentation was embedded in a conceptual framework of crisis, migration and refugeehood, carefully prepared by earlier speakers. Here, I would like to call special attention to a discussion between Eftihia Voutira, Olga Demetriou and Manolis Pratsinakis, who formed the panel on ‘Migration, Refugeehood, Citizenship’ chaired by Eleni Stamou. Eftihia Voutira brought to our attention the constructions of meaning of the concepts ‘migrant’ and ‘refugee’, and compared the modern-day (negative) value judgement the terms carry with more positive past constructions of refugeehood in Cyprus, Greece and other countries. Voutira saw as one of the tasks of modern Greek scholars in the 21st century to “rehabilitate the term ‘migrant’ (μετανάστης) in Greek”, to reconstruct a positive evaluation of the concept, something I think is also direly needed in other languages.

Some speakers directly influenced and inspired the research I am devoted to at the moment, and here I would like to thank them and of course the initiators of the network for creating such a fruitful environment for the conception of new ideas. Currently, I am exploring a number of imagined alternative futures of the Aegean islands in a selection of artistic and intellectual expressions, produced in the 2nd decade of the 21st century, a period marked by ‘crises’, including the Greek financial debt crisis, the European migrant reception crisis and all these against a background of climate crisis. Through the lens of utopia-thinking I analyse Kyriaki Goni’s multi-media installation ‘The Aegean Datahaven’ (2017), Marula Tsagkari’s article ‘Life on the Green Islands of Southern-Europe in 2049’ (2019) and Sotiris Dimitriou’s novella The Silence of the Dry Weed (2011). This, in order to tease out under which conditions alternative futures of the Aegean region are imagined through and despite a present of crisis. Anthi Argyriou, who presented on Greek contemporary art on the ‘refugee crisis’ and the question of hospitality, brought to my attention what has become one of the central objects of my current research, in the form of a handwritten note passed to me through the room after my presentation. Carl Mauzy, who presented on Marshall Plan photography and the construction of post-war Greek identity, brought the relevance of the development of the energy infrastructure on the Greek islands to my attention. This aspect, together with a helpful suggestion of Dimitris Papanikolaou over a porridge breakfast, steered me towards the work of Daniel M. Knight on green energy in Greece, who will hopefully attend the network’s next meeting in order to guide our collective critical attention to a topic that was almost entirely absent during this first edition: Greece and climate change, green energy transition and regional entanglements of power and interests in the Anthropocene. 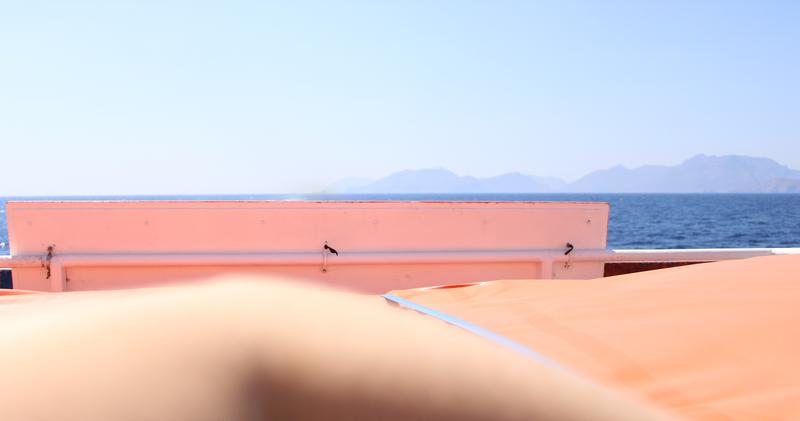 On the Ferry from Rhodes to Nisyros. Photograph by Eveline Mineur