Reflections on the "Pilgrimage and the Senses" Conference (7 June 2019)

On Friday, June 7th, Oxford welcomed over 70 international delegates to the "Pilgrimage and the Senses" conference, hosted in the historic St Luke's Chapel in the Radcliffe Observatory Quarter. Organised by Oxford History of Art DPhil Students Helena Guzik and Sylvia Alvares-Correa, with assistance from Shanti Daffern (MSt Student, Medieval and Modern Languages, University of Oxford), the interdisciplinary conference shed light on how sensory perception shapes and is shaped by the experience of pilgrimage across cultures, faith traditions, and throughout history. While pilgrimages are grounded in physical experiences—a journey (real or imagined), encounters with sites and/or relics, and commemorative tokens—they simultaneously demand a devotional focus on the metaphysical. A ubiquitous and long-lasting devotional practice, pilgrimage is a useful lens through which to examine how humans encounter the sacred through the tools of perception available to us. Focusing on the ways in which pilgrimage engages the senses contributes to our knowledge of how people have historically understood both religious experience and their bodies as vehicles of devotional participation.

Given the recent surge in both sensory studies and pilgrimage studies, the time seemed ideal for a conference combining these fields. The call for papers generated a groundswell of interest: in the end, 15 papers were chosen from the over 150 submissions received from 34 countries. What resulted was a dynamic programme, featuring a mix of senior scholars and early career researchers. Through their papers, we journeyed from early Solomonic Ethiopia to Renaissance Italy, from medieval Jerusalem to modern India, from the early Islamic Middle East to contemporary Britain. Our speakers travelled equally great distances, flying in from as far afield as Chile, India, Thailand, and the United States. The day was divided into five thematic panels: "Texts and Travellers", "Sacred Soundscapes", "Perceiving in Proximity", "Embodying Pilgrimage", and "Objects and Memory". Speakers approached the conference theme from a number of disciplinary perspectives, including anthropology, art history, history, literature, religious studies, and sociology. Together, the papers demonstrated how sensory engagement helped amplify, ritualize, record, and recall the experience of pilgrimage. 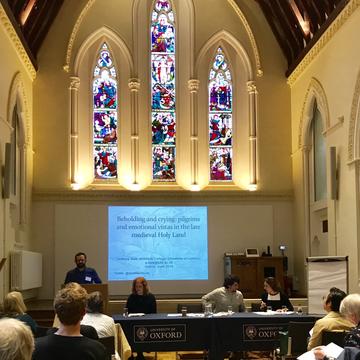 The first panel, "Texts and Travellers", chaired by Professor Geraldine Johnson (University of Oxford), explored the ways in which textual material facilitated or documented the sensory experiences of pilgrims, whether real or imagined. DPhil Student Raphaela Rohrhofer (University of Oxford) got things started with an examination of the role played by the sense of sight in The Pilgrimage of the Lyfe of the Manhode, the anonymous fifteenth-century translation of Guillaume de Deguileville's Pèlerinage de la vie humaine (1331). Professor Anthony Bale (Birkbeck, University of London) looked at medieval pilgrims' accounts of the Holy Land to understand how perceptions—particularly visual—of the sacred topography of the Holy Land shaped emotional responses and constituted a form of geographical knowledge. We then shifted to Africa to learn from Dr Jacopo Gnisci (University of Oxford) about how manuscripts facilitated contemplation of the loca sancta in early Solomonic Ethiopia.

After a break for hot drinks in the Andrew Wiles Building, we returned for our second panel on "Sacred Soundscapes", chaired by Professor Gervase Rosser (University of Oxford). Dr Blaíthín Hurley (University College Cork) launched us into an examination of the lively soundscape described in fifteenth-century canon Pietro Casola's pilgrimage account. Professor Guangtian Ha (Haverford College) detailed a series of vocal rituals in the pilgrimages of China's Jahriyya Sufi community, revealing how organised use of the human voice forges identity, cultivates piety, sustains sanctity, and builds community. Finally, Professor Kathryn Barush (Graduate Theological Union, Berkeley) brought our focus back to our own backyard in her consideration of how the British Pilgrimage Trust is making effective use of ancient pilgrimage song and chant—a musical site of communitas—to translate the practice of British pilgrimage from the past into the present. Dr Guy Hayward, co-founder of the BPT, was in attendance, and got the entire room to take advantage of the chapel's acoustics by participating in an impromptu rendition of Jerusalem. 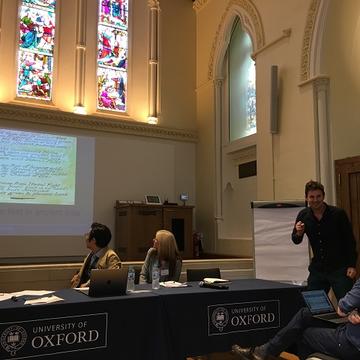 For our third panel, "Perceiving in Proximity", chaired by Professor Kathryne Beebe (University of North Texas), we drew our focus inward, to sensory experiences involving direct bodily contact. DPhil Student Fuchsia Hart (University of Oxford) analysed Ibn Qulawayh’s tenth-century The Complete Pilgrimage, one of the earliest pilgrimage guides in the formative period of Shi'i Islam, to examine the roles of scent, smell, and taste in pilgrimage rituals. Dr Adam Bursi (Utrecht University) then explored early Islamic proscriptions for and against what to touch at pilgrimage sites.

Following lunch we returned for our fourth panel, chaired by Professor Peter Frankopan (University of Oxford), on the theme of "Embodying Pilgrimage". PhD Student Medardo Rosario (University of Chicago) analysed the text of Francisco López de Úbeda’s 1605 La pícara justina (The Spanish Jilt) to show how protagonist's embodied pilgrimage to Santiago de Compostela gave her agency to escape the moralising and marginalising restrictions of seventeenth-century Spanish society. Dr Shruti Amar (King's College London) examined the experiences of female pilgrims at the Shravan festival of Jharkhand, focusing on how caste politics influence sensory perceptions of the journey. Finally, Dr Tatsuma Padoan (University College Cork / SOAS, University of London) took us on an anthropological journey to Mt Kiso Ontake in Japan to explore the phenomenon of spirit possession, considering bodies themselves as moving sites of sensory encounters with the sacred.

After another break for caffeine, we returned for our final panel of the day, on "Objects and Memory", chaired by Professor Jaś Elsner (University of Oxford). PhD Student Kristen Racaniello (City University of New York) looked at seventh-century pilgrim flasks and their potential to capture the sensory experiences of shrines for the pilgrim to carry home. A dual presentation by Professor Olaya Sanfuentes (Pontificia Universidad Católica de Chile) and Natalia Keller (Museum of Solidarity Salvador Allende / Adolfo Ibañez University) delved into the rich sensory world of fanales, illuminating how these glass bells which encase miniature figurines of the Christ Child acted as vehicles for eighteenth- and nineteenth-century South American nuns to experience a mental pilgrimage to paradise. Last but not least, Professor Juliet Simpson (Coventry University) addressed the modern afterlife of medieval beguinages, treated by nineteenth-century travellers and artists as nostalgic and touristic sites of sensory pilgrimage. 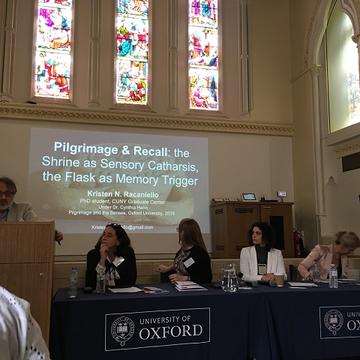 The day's events culminated with a keynote address by Professor Kathryn Rudy (University of St Andrews), introduced by Professor Henrike Lähnemann (University of Oxford). We journeyed from Belgium to India to witness how objects from different faith traditions were used to evoke and recall the sensory experience of pilgrimages, such as a sixteenth-century shirt embroidered with Holy Pilgrimage shrines in Mughal India which served as both a visual and haptic stimulus. Throughout the course of the day, the papers showed how visual, tactile, and olfactory stimuli could serve as mnemonic devices helping pilgrims recall their own journeys or even to conjure visualizations of journeys that were never physically enacted. You could drink your clay amulet, wear your embroidered shirt, or trace your fingers around a painted miniature of a shrine. We learned how shrines can encompass not only mountains and architectural structures, but even the human body itself. We heard how the soundscapes of pilgrimages—both harmonious and cacophonous—were used to cultivate personal piety and to help forge a common group identity, even linking a pilgrim to those who have come before them. From the lively conversations overheard throughout the day and which continued into the evening, it is clear that the theme sparked many ideas for future projects and avenues for collaboration. The rich and varied papers that the conference call solicited attest to the potential for this topic to be carried further, and we sincerely hope this conference will inspire further inquiry into these themes. 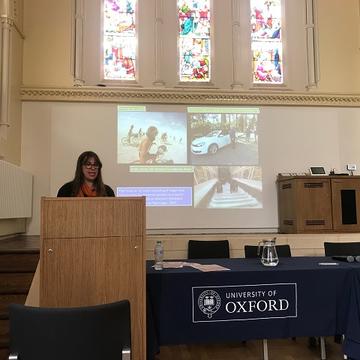 Finally, no pilgrimage-themed conference would be complete without the chance to make a local pilgrimage. On Saturday, June 8th, interested speakers and their guests were invited on a 15km pilgrimage, beginning at St Leonard's Church in Eynsham and culminating at Christ Church Cathedral in Oxford. Along the way we visited the remains of Godstowe Abbey—burial place of King Henry II's "Fair Rosamunde" and a favoured picnic ground of Lewis Carroll and Alice Liddell—as well as St Margaret's Church and St Frithuswith's Holy Well, a popular pilgrimage destination with a rich history. The sunny, windy day allowed for a leisurely walk through the Oxfordshire countryside, along with some delightful detours for kite-flying, strawberry picking, lunch at the Trout pub, and an impromptu performance by Henrike Lähnemann on the harmonium at St Margaret's. As everyone knows, the best parts of pilgrimages are unplanned. 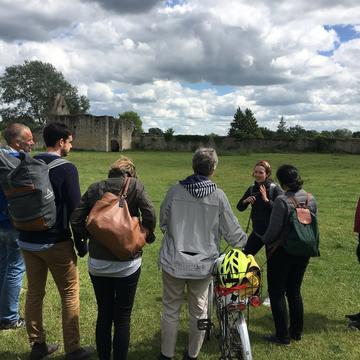 "Pilgrimage and the Senses" was generously sponsored by The Oxford Pilgrimage Studies Network, The Oxford Research Centre in the Humanities (TORCH), the History of Art Department, the Centre for Early Modern Studies, and Camino Pilgrim ™ The Confraternity of St James. The organisers would also like to thank our colleagues in TORCH, the Mathematics Institute, the St Luke's Chapel team, and the staff of the Vaults & Garden Café for making the day run so smoothly. Finally, an enormous thank you to all our speakers, panel chairs, and attendees for contributing to the conference's success.

For the full programme and paper titles, please visit the conference website. 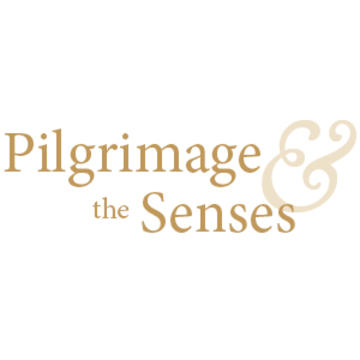