Report on a Talk by Daron Burrows by Josefina Troncoso

As a way to diversify both the contents of this blog and my interests, I attended professor Daron Burrows’ seminar on anthropomorphic genitalia in medieval French literature, back in first week of Michaelmas.

Exactly that. Genitalia that are, if you may, well-endowed with human characteristics.

Dr Burrows’ discussion began with a reminder that the anthropomorphising of human sexual organs goes much further back than we’d think. In the famous sixteenth-century treaty of witchcraft Malleus Maleficarum, for instance, witches are said to have detached penises, which then became animated on their own accord and had adventures of some kind. Instead of behaving like people, however, these loose members were rather more like pets; they even nested and were fed oats.

The subjects of Dr Burrows’ discussion, in addition to resembling archetypal characters of medieval romance to an uncomfortable degree, were a couple of centuries older; they belong in the Old French fabliaux, or short comic narratives written mostly by anonymous authors within the 12thand 14th centuries. One of their distinguishing and most remarkable features is their frank treatment of sex, which one wouldn’t find in courtly and (especially!) religious literature – but their obsession with sexual organs reaches such lengths that Dr Burrows referred to another academic’s suggestion that male genitalia, at least, is “treated like meat on display at a butchers.”

The texts to which Dr Burrows introduced us subvert that by turning the genitalia itself into their protagonists, becoming detached from the human body in five alternative ways.

The first one, “gaze”, refers to the narratorial focus on one of the characters’ genitalia, rather than on the character themselves. In Le Fevre de Creeil, for instance, the smith Gautier’s penis is spoken about in precise detail throughout an impressive twenty-nine lines, and receives more attention than both its bearer and the other protagonists. It is, if you may, described at great length. “Metaphor”, the second degree, occurs when the text uses metaphor and euphemism to separate the characters from their genitalia, as in La Damoisele qui ne pooit oïr parler de foutre. The third degree, “uncontrollability”, applies to texts where characters lose control of their sexual organs, as though possessing of their own. Priapism, Dr Burrows adds, “is the order of the day.” After uncontrollability comes “detachment”, a self-explanatory turn of events which is known to occur frequently to priests who have been castrated. The final degree of separation is “autonomy”, in which the sexual organs live autonomously as anthropomorphic entities, without anyone even suggesting that they were once—if ever—attached to someone.

Now that we know the five degrees of genital separation, Dr Burrows introduces his two case studies: Du vit et de la coille, and Do con, do vet et de la soriz; “Vit” and “Con” respectively. In Vit, a verse narrative consisting of 80 lines, a proudly sitting penis rides to a vagina’s rescue after she has been stolen away by two Bretons. Meanwhile, she is tossing hay in a field. The penis is eager to rescue her, but the testicles—who seem like a part of the sexual organ independent of the sexual organ itself!—give him a hard time and refuse. A storm begins to break and the penis asks the vagina to shelter him under the hay, which they’ve set aside in a pile, but she is reluctant to let the balls in because they were unhelpful earlier. This, Dr Burrows concludes, is sort of a twisted lesson that explains why the testicles cannot enter the vagina during intercourse. Con, of 124 lines, describes the adventure of an “impressively sized” penis, a very proud vagina, and their mouse companion. Like the previous protagonist, both penis and vagina engage in various agricultural and military activities; the vagina in particular is noted to be uncharacteristically chivalrous. They make their merry way into a town and are given jobs based on their respective skills by one of its inhabitants; somehow, the penis ends up thrusting the mouse and a handful of grapes inside the vagina. Luckily, the mouse quickly makes its way out: as it turns out, the bottom of the vagina is open. What these disparate narratives leave us with is ultimate genital autonomy.

How could we make sense of these stories? Dr Burrows suggests a number of readings:

Besides having heard the words “cock” and “fanny” more than I ever have in my whole life, this fantastic seminar gave me the opportunity to think about how the way we decide to explore a text may affect the way future generations of scholars choose to work on them; and how, likewise, our curiosity about what we research should not be restricted to nor dictated by the secondary sources available to us. This seminar also reminded me of the importance of paying very careful attention to language, and to consider that in any text I research, there could be expressions or other complex forms of linguistic play that might enhance my understanding should I be savvy enough to spot them. I am thankful to Dr Burrows for the suggested strategies for readings of the two texts—of any text, whether they might be as disparate as these fabliaux or not—and for the many laughs shared from beginning to end of the seminar.

The Medieval French Research Seminar meets at the Maison Française on Tuesdays in odd weeks (refreshments from 17:00; papers starting at 17:15). The programme for MT2018 was as follows: 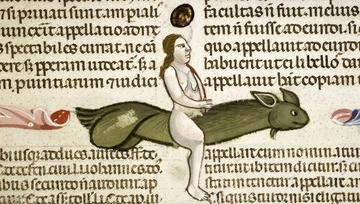