María Morrás writes: Embodying spirituality: A transnational view gathered six researchers which dealt on various cases scattered all over Europe (France, Spain, Germany, England) from the twelfth to the sixteenth century, from texts produced by individual figures (Julian of Norwich, Aljit Bake) to the literary outcome of certain communities (German Benedictines, Catalan Carmelites) or the interaction between men and women (in the Loire region) and between Burgundian and Iberian illuminators and copyists in the production of devotional books. Each one of the cases show to present singular traits, but there where some overarching issues that appear recurrently: the tension between the intimate experience of mysticism and the necessity to live within a community, the interplay between building up a sense of identity within a certain community and the impulse to weave a network with other female centres within a religious order and with the male Church authorities.

These negotiations reflect on the typology of the textual outcomes, in which predominates on the one hand the intimate confessional, on the other the epistolary as a the utmost expression of sociability. In between chronicles and song-books contributes to preserve the memory of the communities and integrate the rebellious figure in the stream of shared history. In parallel, the language on which texts are written, and which act as a membrane between the individual and the community and among communities, show the convergence of those spheres in mixing up vernacular and Latin, inspiration from the classical and form the liturgical and biblical.

The exposition of such varied cases proved to be extremely fruitful by providing a common space in which to compare, confront and appreciate differences and common traits in female textual communities.

My presentation will focus on the Dutch nun Alijt Bake and her fifteenth-century text Boexcken van mijn beghin ende voortganck (‘Book on my beginnings and progress’). I will first elaborate on Bake’s performative piety, the embodiment of her spirituality and the relationship between images and emotions in her text. Then, I will explore how Bake’s visual and performative experiences are connected to her religious community. How is Bake’s life story intertwined with the history of her convent (Galilea in Ghent) and the reform movement of the Devotio Moderna?

“A Contemplative Life For Me: Solitude and Community in The Book of Margery Kempe and Continental Sisterbooks”

Self-styled saint Margery Kempe seeks a highly private relationship with Christ, but also prompts a stranger's wish that she “were enclosed in a house of stone”; Modern Devout Sisters attempt to withdraw from the community to study on their own, but with disastrous consequences for their posthumous fate. Biographical texts by medieval holy women, such as the Book, and Middle Dutch and Middle High German Sister-books are shot through with both anxiety about withdrawing from particular communities and attention to its mystical potential. Ultimately, this paper illuminates their significance to the history of vernacular theology and argues for a more comparative, pan-European approach to medieval women’s mysticism.

“Made in the Netherlands or made in Iberia? Manuscripts featuring Netherlandish miniatures and Iberian texts”

I will examine a group of Netherlandish Books of Hours whose distinctive codicological features propose that while their miniatures were supplied by Netherlandish illuminators, their text was written by an Iberian scribe, working either in the South Netherlands or in Spain or Portugal. If this holds true, it suggests that the (primarily) female patrons of these manuscripts favoured Netherlandish images for their devotional books, but nonetheless turned to native scribes to supply the text elements.

Session 2: Nuns’ letters and the art of networking

“Embodying emotions in the epistolary exchange between Baudri of Bourgueil and Constance of Le Ronceray (Loraine, XI century)”

This paper will examine what dynamics of identity and gender can be extracted from the exchange of elegiac letters in Latin between the archbishop of Dol, Baudri of Bourgueil, and the nun Constance of Le Ronceray (Loria, France, eleventh and twelfth centuries).

I will present a series of manuscript poems written in Spanish by Catalan nuns in the 16th and 18th centuries, which were discovered in the archives of the convents of Barcelona and Vic (Spain). I will examine how poetic writing became a creative practice in Discalced Carmelite convents, under the influence of the founder, Teresa de Jesús. I am particularly interested in analyzing the theatrical and musical contexts in which this poetry was created.

The ‘Nuns’ Network’ gives access to the correspondence of the Benedictine nuns of Lüne between ca. 1460 and 1555. Comprising nearly 1800 letters written in Latin, Low German and a characteristic mix of both languages, is a unique testimony of female writing in the Middle Ages. The edition brings to light a forgotten culture of late medieval letter-writing. The nuns formed a network of religious, social and economic alliance through the whole Hanseatic region in their correspondence with important political and religious powers of their time and in the ‘intranet’ of the daily exchange with the neighbouring convents on the Lüneburg Heath. Watch the presentation: https://youtu.be/XYLB7rr_gw0 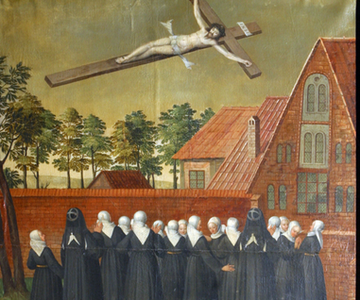