This TORCH Women in the Humanities Research Grant generously supported a research trip to core archives and collections in Paris and the regions of the Creuse and Tarn with works by and documentation concerning women at the heart of the twentieth-century tapestry revival in France. The trip was undertaken in early April 2015 and the hopes that evidence of under scrutinised histories of women’s creativity and entrepreneurship would be further enriched proved well-founded.

The main research questions of the project centre on examining:
• To what extent and in what ways women entrepreneurs-collectors energised the tapestry revival;
• Whether women cartoon designers as well as weavers were involved in the production of these textiles (not the received wisdom which has focussed almost exclusively on male cartoon painters);
• How gender politics inflects the theorisation of the creative process of tapestry-making as an individual or collective undertaking.

The research began with a day in the Bibliothèque des Arts Décoratifs Paris working through the secondary scholarship and primary press reviews about the gallery owners Marie Cuttoli and Denise Majorel which had been identified as unavailable in UK libraries. The Mobilier National kindly allowed access to their archival holdings relating to tapestries commissioned between 1930 and 1960 which took four days to analyse. These files contained correspondence between the state and all the key personalities involved in producing a tapestry (cartoon painters; tapestry studios; syndicalist groups and chambers of commerce; even some correspondence with weavers seeking employment during the economic crisis and war years). This collection proved particularly rich in work by women cartoon painters previously unknown to the researcher, some may prove hard to document in depth but three careers seem especially productive for further analysis: Elisabeth Chaplin; Hélène Detroyat and Pauline Peugniez. The archivist of the Mobilier National, Mme Liane Lerable, and the curator M. Thomas Bohl were especially generous and helpful in providing access to these documents.

The second week was devoted to the exploration of archival holdings in the region of the Creuse, in particular the Centre de la Documentation de la Tapisserie Aubusson and the Archives Départmentales, Guéret. These holdings revealed that Peugniez played an important role as a curator of exhibitions and theorist of tapestry as well as a practicing cartoon painter. The business archive of the Tabard firm held in Guéret included files about Denise Majorel ‘s Galerie La Demeure and Galerie Denise René, another woman gallery owner who staged influential tapestry exhibitions in the 1950s and 60s. Mme Catherine Giraud in Aubusson generously facilitated access to 1930s and 1940s exhibition catalogues and periodicals in the collection. The opportunity to speak informally with women weavers in Aubusson, both a tutor in the Maison du Tapissier as well as a retired employee of Mme Goubely’s studio, offered fascinating insights into the working lives of creative women.

The new Musée Dom Robert in the Tarn had opened the very week the researcher visited. When contacted to arrange a visit, the director explained the Goubely archive was not yet accessible to researchers but hopefully might be available in part in September. Nonetheless the opportunity to see Goubely studio tapestries and an installation recreating the workshop were invaluable to see.

Further research
The richness of the holdings found in the Paris and Aubusson archives meant that it seemed best to postpone the visit to Angers to see the Liberté tapestry (after a cartoon by Jean Lurçat and woven in the workshops run by Suzanne Goubely-Gatien). This museum and the Centre Pompidou did not reply to several requests to view archival documentation so these threads as well as a visit to the Goubely archive will need to be pursued in a further trip to France self-funded by the researcher over the summer.

Dissemination
This project will be presented to three distinct academic and wider audiences in the month of September 2015: an international design history conference; the University’s Alumni weekend and an EU Funded research project:

11-13 September 2015:
Conference paper at the Annual Design History Society Conference: "How we live, and How we might live": Design and the Spirit of Critical Utopianism California College of the Arts, San Francisco, California

19 September 2015:
Public Lecture Alumni Weekend University of Oxford; the research project and the support of the TORCH Women in the Humanities support were documented in an article in the Department for Continuing Education termly newsletter which is circulated to over 50,000 people. A webpage with a lengthier version of the article is permanently located on the Department site at: https://www.conted.ox.ac.uk/tapestry

23-25 September 2015:
Keynote lecture for the first Historical Workshop funded by the Creative Europe of the European Union project Mo Mo Wo Women’s creativity since the Modern Movement at the University of Leiden http://www.momowo.eu/

The keynote lecture was invited for inclusion in the e-book to be produced from the Mo Mo Wo workshop and a further article for an academic journal is also planned to be written during the sabbatical agreed for Hilary and Trinity term 2016. 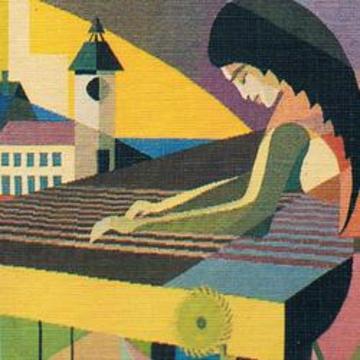