Angelica is reading for a DPhil in English at Oriel College. Her research explores representations of ‘deviant’ adolescent female gender and sexuality in American literature and film post-1990. In this review, Angelica explores the representation of transgender experience in Sebastián Lelio’s 2017 film A Fantastic Woman.

Sebastián Lelio’s Academy Award-winning A Fantastic Woman (2017) offers an uplifting story of strength and love in its exploration of the life of Marina Vidal (Daniela Vega), a transgender woman living in Santiago, Chile.

Marina lives a happy life with her partner, Orlando. However, when Orlando falls ill one night, things start to unravel. Marina’s identity as a transgender woman leads the police to treat her as a criminal when she takes Orlando to hospital. This is a theme that permeates Lelio’s film, as Marina is continually subject to the scrutiny and hostility of the legal system and of Chilean society, as her identity is put on trial in the narrative. Indeed, Marina encounters repeated discrimination by police officers. For instance, when she informs them that her name is Marina, she is asked, ‘is that a nickname?’ After then insisting on seeing her ID card, which reveals her legal name of Daniel, the police officers then call her ‘Sir,’ as an aggressive attempt to assert what they consider to be Marina’s ‘true’ gender identity.

People continually attempt to dehumanise Marina based on her transgender identity: Orlando’s son tells her, ‘I don’t know what you are […] it’s a perversion.’ However, Marina refuses to allow him to dismiss her identity, as she asserts, ‘I’m the same as you.’ Indeed, Lelio continually depicts Marina’s strength in the face of discrimination. This is most overtly witnessed when Orlando’s family stop Marina on the street and bustle her into their car, in anger that she has attended Orlando’s funeral against their wishes. This scene is a tense and uncomfortable viewing experience, shot in close-up with a narrow frame: a visual technique that makes the audience feel like a passenger watching from the front seat of the car. This scene is heavy with the threat of violence, as Marina is roughly shoved and called a ‘fucking monster.’ To prevent her from escaping, Orlando’s son binds her hands and wraps tape around Marina’s face, in an attempt to trap but also to silence her – in a move that can be considered a broader attempt to silence trans identities. However, when Marina finally breaks free from the car, she rips the tape off her face and strides home along the Santiago streets – bravely marching on and not allowing others’ hostility to affect her life.  Although Marina is repeatedly excluded from spaces in the film – the hospital, Orlando’s funeral, and the apartment where they lived together – she defiantly and continually reclaims her identity when others try to dismiss her, and she repeatedly reclaims the city space for herself. This reclamation is most poignantly and playfully witnessed when she drives around Santiago blaring Aretha Franklin’s song Natural Woman, as she dismisses essentialist understandings of gender and sexuality, and refuses to allow anyone to disavow what she considers to be her ‘natural’ identity.

This challenge to notions of essentialist, ‘natural’ gender identities is immediately established in the film’s opening image of water cascading and rushing down a waterfall. Here, the freedom and fluidity of this cascade reflect not only the energy and joie de vivre of Marina but also the film’s central theme and exploration of the ambiguity and shifting nature of gender and sexual identity. Indeed, as underscored through the aquatic associations of her name, Marina’s identity proves to not only be as fluid as the water rushing through this opening scene, but Lelio’s narrative also underlines how Marina is as ‘natural’ as the water rushing through this wonder of the natural world. Indeed, Sonia, Orlando’s ex-wife, calls Marina, ‘a chimera,’ which not only underscores the multifaceted, complex nature of identity, but this association with a fierce figure of Greek mythology also illuminates Marina’s fundamental strength and vitality, which powers the film as she proudly asserts her identity and passion for life. 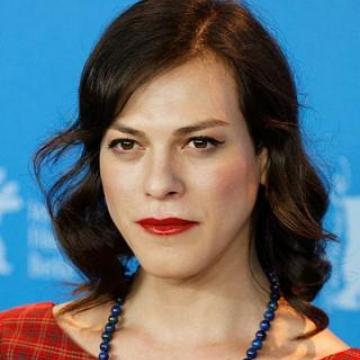