Review: ‘Spoken Language is a Prison: Ways of Belonging and Speaking in North-West Greenland'

Visitors to the Inugguit of North-West Greenland, among whom anthropologist Stephen Leonard spent twelve long, intense months from the summer of 2010, are often told: “We are all related”. It is an understandable claim, perhaps, for the world’s northernmost settled people, numbering not more than a thousand, who depend utterly on their community and whose ‘impenetrable’ Polar-Eskimo dialect, Inuktun, has never been fully transcribed. The constant reiteration of kinship, however, is more than fact. It is the act by which the Inugguit delineate the bounds of belonging, and contains an entire philosophy, burnished by some of the world’s most hostile weather, of what it means to be alive.

Leonard’s seminar, held last week as part of TORCH’s Nordic Network series, all too briefly opened a rare window to the Inugguit world, at once painfully vulnerable and mind-numbingly expansive. They are the last group to travel nearly exclusively by dogsled, and are, in Leonard’s words, “modern hunter-gatherers”. The imperatives of crouching for hours in the deep snow, and locating their quarry precisely with minimal communication, have shaped a language that seems wrapped in on itself, “like the sounds of a polar bear” – a bewildering sequence of sighs, deep breaths, and ragged sounds. When Anglicized, the Inuktun words can be more than fifty letters long. Core concepts are modified by highly nuanced semantic affixes to express ideas which would take whole sentences in English. There is little grammatical redundancy: with an enervating, almost graceful physicality, the Inugguit get to the point.

The oral culture of the Inugguit also reveals what Leonard calls a “thick” knowledge of each other, an in-depth understanding of community that is not sustained by any instrumental goal. Not only one’s identity, but life itself, is embedded in connections of kinship that situate every social position. To the Inugguit, ‘strangers’ are those who “have no kin connection”, and to commit suicide is to “go into oneself” – a synonymous expression for taking one’s life and breaking all social connections. Long months in the near-constant sunlight, followed by unrelenting dark, have created a small but intense social world where what is ‘familiar’ is not only known and described in historical detail, but grasped within a matrix of flesh and blood. The Inugguit maintain their close connections through intensive visiting (often going to the same house four or five times a day), complex naming practices (in which the dead are as much a part of the community as the living), and celebrating shared birth-years. In the nuna – the Inugguit’s shared human, natural, and spiritual environment – friends are family.

Leonard talked lucidly about his year spent in the arctic, discovering the joys and trials of such immersive, all-encompassing locality. The Inugguit “never seemed to need time to themselves”, and would pass in and out of his hut, either to sit in silence or simply to discuss who else had been visiting whom. He became the object of much good-natured banter for failing to pronounce their mysterious words, and was called ‘Stiffy’ when fumbling for a comeback. It was not unlike becoming part of a new, foreign family, and receiving a crash course in their inside jokes and meaningful silences. At the same time, Leonard documented, first-hand, a way of life in which speech itself could “conjure up kinship and belonging”, and silence was as powerful a gesture as speech. He returned from Greenland in late 2011 with material for two monographs and a collection of poetry, Arctic Journal, published by The Choir Press in 2014. Now a Leverhulme Early Career Fellow at Exeter College, Leonard has embarked on a new study of the interactions between radio, poetry, and oral culture in the Faroe Islands.

What was it that first brought him to Greenland, and kept him on this fringe of the world for a year? Leonard himself is soft-spoken, a scholar’s scholar. He skirted the question in his presentation, but told us of a Japanese man he met in Greenland who had decided to stay put since arriving in the 1970s. Asked the same question, the man had replied: “I wanted my mind to be open to thoughts”, which, of course, is contained in a single word in Inuktun. Something about the unique cognitive world of the Inugguit seems to have captured Leonard with the same desire, and it is in describing their ways of thinking and being that he is at his most poetic – and wistful. The words of the Inugguit, he says, are “like the knife of a carver”, poised to “free concepts from the outside” with the skill of an ice sculptor. To the Inugguit, breath is synonymous with life, and language, which shares a root word with “wind” in Inuktun, is conceived as “shaped air”. Every sound has significance: “words are events”.

It is a cognitive world that is steadily disappearing with the retreat of polar ice and the intrusions of modern technology. Since his return, Leonard has written extensively about what he calls ‘death by monoculture’, arguing sensitively that a more nuanced choice can be made between development and cultural preservation. Beyond academic fondness, his advocacy bears the marks of love, months of loneliness and bleak ice. More than his words tell us so: you can hear it in his voice. 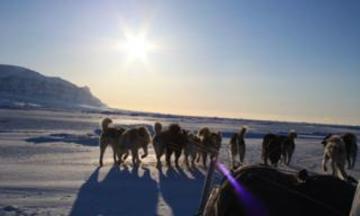