In the summer, Benjamin Thomas White posted a piece on the new Memorial Museum at Rivesaltes Camp. Lyndsey Stonebridge, panellist in the Textual 2 workshop, followed his footsteps. Here she reflects on the meanings of commemoration in the context of refugee politics.

In October I visited the new memorial museum at Rivesaltes camp in South West France for the first time.  Like Gurs, where the political philosopher, Hannah Arendt was interned in 1940, Rivesaltes was never just one kind of camp. Originally an army barracks, it was turned into a refugee camp for republicans fleeing Spain in 1938. In 1939 it became an internment camp for enemy undesirables then, after Vichy, a deportation to death camp for the Jews. 2289 people, mainly women and children, were sent to the extermination camps between August 11 and the end of October 1942. As the war ended, Rivesaltes housed prisoners-of-war and collaborators. Algerian Pied-Noirs moved in briefly in the 1950s, followed, more permanently, by Algerian Muslims who had fought with the French between 1954 and 1962. As Benjamin Thomas White adds in his blogpost—and this isn't made explicit in the exhibition—the camp was opened again in 1980 to hold illegal immigrants from Spain. This was the same year Spain joined the EU so that purpose was quickly made redundant, but, given that the barracks had already opened, it was easy enough to detain non-EU and undocumented migrants instead. The last left in 2007, when plans to turn the camp into a memorial museum had already begun.

Rivesaltes camp is both bleak and beautiful. Exposed on a plain, everyone remarks on the relentless wind.  You look out at nothing but the empty lowland, nothing but nothing, and the dome of the sharp breathtakingly blue sky, the shimmering mirage of the foothills of the Pyrenees and, to the south, the suggestion of the sea. More recent visitors remark on how difficult it is to find; you would think a large camp on the middle of a large expanse of flat land would be difficult to miss, but we were not the first pilgrims to find ourselves led by Satnav into the vineyards, bickering with the increasingly insane directions, and, inevitably, with one another.

You always get us lost when we’re going to these places, my son remarked, lugubriously, from the back seat.

Historically speaking, the work of the new museum on the site of the camp is admirable. Not shying away from making connections between 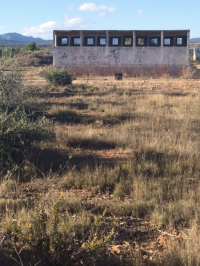 French collaboration and colonialism, unafraid of the political continuum that links refugees to undesirable aliens, genocide victims, and undocumented migrants, the permanent exhibition contains, in Thomas-White’s words, an ‘impressively hard to look at history.’  This is grown-up commemoration politics coming from a diverse number of groups. As a work of collective remembrance, the memorial museum is an act of good faith.

Nowhere is this more apparent than in semi-derelict camp barracks themselves, preserved in their semi-obsolescence. Unnervingly, it is the shower and washrooms that have endured time and the elements best; solid concrete memorials to life at its most naked. 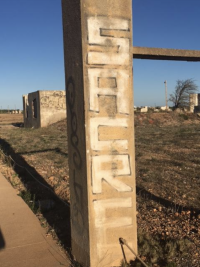 Many of the ruins have been graffiti-ed by citizen historians, another good faith act. The most striking example is on the right hand pillar of what was once the entrance gate: ‘Sacre’ the white letters read down the column. Sacred.

Is this the sacred, written in the vernacular of the profane, I wondered? Has Rivesaltes found a way of negotiating the gap between the sacralization of memory and the more prosaic business of ‘impressively hard to look at history’?

I have in mind here a quotation from Pierre Nora, which I came across again recently in David Rieff’s challenge to the conventional pieties of commemoration, In Praise of Forgetting: ‘Memory installs remembrance within the sacred; history, always prosaic, releases it again’.

It’s a brilliant observation, elaborated at length in Rieff’s book, about how commemoration is at once mythic and, and as such, always challenged by and vulnerable to history. Some of that history is already making itself felt at Rivesaltes. ‘No oblidiem ni la història ni les nostres enemics…’: ‘Forget neither the history nor our enemies’ the Catalan anarchists have written on another ruin. All enemies of humanity, of course, are also enemies of Catalonia. However much we might pin our faith on cosmopolitan or transnational memory, on things held to be universally sacred, the nationalist history pirates are never far away.

The short answer to my question, is no, the museum does not find a place between myth and history, the sacred and the prosaic, nor, indeed, between past and present. Nor does it want to. It is a memorial museum. It has made itself sacred by design.

The museum building is actually buried underground. In a stunning piece of architectural immersion by Rudy Ricciotti, you don’t know where it is until you follow the ochre walls down to the depths. You become lost, entombed again, this time in the dark not under the sky. Entering the museum’s central hall is like entering an upside-down cavernous cathedral at dusk or dawn. The light doesn’t come from above and outside, but from below. But the effect is the same. It is a place designed for quiet reflection. You are supposed to walk slowly. Twitchy teens know to keep their phones off.

The day I was there, the visitors were mainly elderly French people. My twitchy teens were conspicuous.  Les anciens shuffled reverently around the archived photographs and documents, lists, plans, diaries, children’s toys. Then sat, on benches, staring at screens documenting a history many of them had known too well to need to remember: Drancy, the deportations, Algeria.  I didn’t dare, although I wanted badly, to ask one of them, ‘what are you thinking when you see this now?’

As we left I chatted with the receptionist. It’s a beautiful museum, I said. It’s unusual because it’s so historically intelligent. Yes, he replied, and so moving no? Yes, I said, but really historical intelligent. And so moving, he echoed.

Four days after my visit, a report from the Refugee Rights Data Project concluded that in the year since the camps in Calais were razed police violence towards refugees there has intensified to “excessive and life-threatening” levels, particularly for young and accompanied people.

At a recent workshop in Oxford held on Post-War: Commemoration, Reconstruction and Reconciliation I was asked what I thought the future of commemoration was. Thinking about Rivesaltes, I wanted to reply: none, I hope, or at least, not so long as we’re still making prosaic history. I do not want to be mourning today tomorrow. I do not want to be hushing my grandchildren in beautiful buildings.

This piece was posted on http://refugeehistory.org/blog/2017/11/13/sacred-memoryprosaic-history-rivesaltes on 13 November 2017.