Sapphistry on the Spoil Heap: Lesbianism and Female Homosociality in Early Archaeology

Mara is a DPhil student in Classical Languages and Literature based at St Hilda's College, Oxford. She works on women's classical reception in the late 19th and early 20th century and its relationship to women’s homosociality and homosexuality. In this blog post, Mara examines the role of gender in women’s professionalism during the development of archaeology as a discipline and how female homosociality and lesbian relationships helped to increase opportunities for women in the field.

Despite the misconception that archaeology is a ‘masculine profession,’ women played a leading role in the development of the discipline during the late 19th and early 20th century. This was, in part, due to the rise in women’s rights and, relatedly, the growth of the female workforce during this period. As archaeology was an emerging discipline, it was easier for women to make their mark rather than in established, male-dominated disciplines, such as ancient languages. Another major factor in women’s entry into archaeology included Victorian gender segregation. Homosociality, a term originally coined by Eve Sedgwick to describe the gender segregated spheres of the Victorian era, played a substantial role in allowing women to pursue a career in archaeology. Despite the many restrictions placed upon women during this period, they were able to travel in pairs or groups of women with relative ease, and, in a professional sense, to put together teams of women for fieldwork, during which they were able to explore new archaeological techniques, many of which revolutionised the field.

Despite this, many British women archaeologists appeared to be all too aware of being labelled ‘masculine’ as a result of their work: whilst some seemed to relish blurring gender boundaries through their work, others felt a need to explicitly ‘prove’ their femininity. Foreign and ‘uncivilised’ terrains put normative femininity under duress, which many travellers responded to by eschewing ‘sessile’ or ‘static’ femininity for ‘mobile’ masculinity in order to perform their ‘travelling identity.’ However, unlike travellers, whose travelling identities were temporary, archaeologists could not just change ‘costumes’ upon their return – they would always be archaeologists. Therefore, they were able to combine elements of masculinity and femininity to reflect the dual and often conflicting aspects of their lives and careers. In France, archaeologists such as Jane Dieulafoy were given special dispensation to wear trousers, a practice which was illegal for women. However, many late 19th and very early 20th century British archaeologists eschewed trousers for the ‘New Woman’ look, consisting of elements from both men’s and women’s clothing – usually a long skirt (often with pantaloons underneath of even sewn in) with a men’s style shirt on top.

By the 1920s and 1930s, women archaeologists were able to enjoy the new kind of celebrity ‘femininity,’ made popular by women athletes and aviators, that pushed the boundaries of gender, just as they did in the field. But, in whichever way they chose to present, lesbianism often proved to be beneficial to their careers, with a number of important female archaeologists travelling and working with their partners.

These include one of the most famous women archaeologists in Britain, Egyptologist Amelia Edwards, born in 1831. Edwards’ sexuality has been largely ignored in histories of archaeology. However, in 2016 the gravesite of Amelia Edwards and her partner Ellen Braysher was given a grade-II listing by Historic England as part of their effort to recognise LGBTQ sites and monuments.

It was on her travels with Braysher that Edwards developed an interest in Egypt and Pharaoh Hatshepshut (also known as Hatasu), one of Egypt’s only female born ‘kings’. Hatshepshut, who wore men’s clothing and a false beard, was largely erased from history by the men that followed them. But Edwards, who wrote and lectured about Hatshepshut frequently, not only helped to re-insert them into the historical record but also posited them as an icon for the suffrage movement. Many feminists referred to Hatshepshut in their arguments for women’s rights and their temple became a site for suffragette pilgrimage. There is now much debate as to whether Hatshepsut wore men’s garb for political or personal reasons, with some historians contending that they were, in fact, transgender and others stating that they were simply trying to assert their role as king. Either way, Hatshepsut was Edwards’ hero and she made sure that their history did not go unnoticed. Edwards also formed the basis of University College London’s Egyptology library and the Petrie Museum of Egyptian Archaeology as well as the Egypt Exploration Fund (now Society), two of the most important centres for the study of Egyptian archaeology.

Some of Amelia Edwards’ papers can be found at the University of Oxford’s Griffith Institute, with some of her sketchbooks available online.

Margaret Benson: Flirtations in the field and family troubles

One of the most fascinating and openly lesbian archaeologists, was another Egyptologist called Margaret Benson, born in 1865. Benson came from a prestigious family: her father, Edward White Benson, was the Archbishop of Canterbury, her uncle, Henry Sidgwick, was the founder of Newnham College Cambridge and her brother, gay writer E.F. Benson, famously wrote the Mapp and Lucia novels (1920-39). Her mother Mary and sister Eleanor were also queer and both daughters fell out with their mother due to the fact that they had lesbian relationships (or ‘swarmings’ as Mary put it) with some of the same women.

Maggie was one of the first students at Lady Margaret Hall in Oxford, where she studied philosophy. She was also the first women granted concession to conduct her own excavations in Egypt, where her eventual life-partner Janet Gourlay joined her. Described as shy and having a ‘cloistered girlish air’ by her fellow students, she was required to spend winters in a warmer climate, meeting Gourlay one winter in Luxor. Gourlay was a Scottish Egyptologist and former student of UCL, where she met Amelia Edwards. As well as being her life partner, she was also her long-term collaborator and co-author on academic publications, including the very well received Temple of Mut. Benson also wrote extensively about cats, and eventually published a book called ‘The Soul of a Cat’, a lesbian bible. Prior to meeting Gourlay, she had confided in a friend that she ‘could never conceive of meeting anyone who was man enough to marry and yet woman enough to love’, but Gourlay seemed to be the perfect solution. Her brother commented that ‘her friendships, very various and far-ranging, were seldom leisurely and refreshing things. She Threw herself into their problems and difficulties, while her emotions were loyal and intense, so that she could not just make up a friendship and leave it to take care of itself.’ Despite her shy beginnings, in her adulthood Maggie was seen as brilliant and domineering, which made her easily able to assert dominance over other women, particularly her lovers and those in her family. After her father’s death in 1896 she took over the leadership role of the family and temporarily relocated the whole family, as well as Janet Gourlay and her mother’s girlfriend Lucy Tait, to Egypt. Where, being the expert on Egypt, she could assert her authority with ease.

This was one of the many factors that contributed to her strained relationship with her mother, alongside their shared lovers. Their relationship was made particularly tense by a mutual fear of lesbian sexuality being mother-daughter incest. However, it is likely that it was more of a power play for familial dominance rather than any desire shared between them that caused the break down in their relationship. Either way, Maggie’s mental health problems led her to be institutionalised in 1907 and she never quite recovered.

Despite these tragic elements, women’s homosociality and homosexuality played a crucial role in early archaeology, allowing these women to make discoveries and develop techniques together that they otherwise would not have had the opportunity to. Even if their relationships were simply companionships (with these distinctions being rather blurred in the past), almost all of the important early women archaeologists had a woman partner with whom they worked, travelled and often lived. Unfortunately, importance of these relationships to the discipline of archaeology and women’s professionalism in general is rarely discussed - rather the ‘add women and stir’ approach is generally employed. However, it is only if we examine their relationships and the nature of their work through a queer lens that we can truly appreciate the contributions these women have made to archaeology, history and queer culture in general. 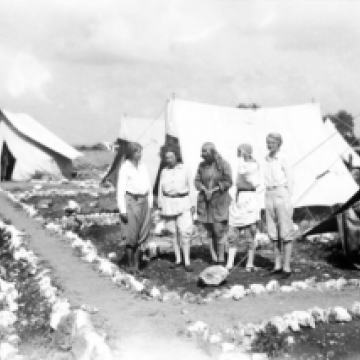