The official launch of the new TORCH-funded network for science and poetry took place in the Humanities building at Oxford University. The early-evening event, free and open to all, convened with a warm and receptive atmosphere, with Dr Sarah Watkinson (St Hilda’s College), Dr Elsa Hammond (St Hilda’s College), and Dr Nicola Thomas (Queen’s College) leading the discussion.

As an early attendee of the SciPo conferences, I felt this was an event I couldn’t miss. My own background is that of a poet, but one who is deeply interested in the sciences and how they interact with poetry.

Elsa and Nicola provided some background on the SciPo Network’s development and advised on upcoming events, including a series of workshops and a second SciPo poetry pamphlet. The pamphlet published this year, Haunted by Cycles of Return: Poems About Climate Change, contains the winning and commended poems from the previous year’s SciPo Conference Poetry Competition, judged by Jane Draycott.

This year will be the fourth in a series of annual SciPo conferences, with ‘Plants, Brain and Imagination’ as the theme for 2019. Jenny Lewis of The Poet's House, Oxford, and Dr Sarah Watkinson founded the annual conference in 2016 to explore the ‘common creative ground’ between science and poetry. The 2019 conference falls on Saturday, the 8th June 2019.

Other upcoming events for the Network will include the first workshop of the series, ‘A Buzz in the Woods: Bee Walk and Poetry Workshop’, to be held at Wytham Woods. Research seminars are to be held on the 28th May (Poetry, Fungi, Poisons, and Drugs) and 11th June (Poetry and Botany). Other workshop and research events will follow, in particular events at the Botanical Gardens in August, and the Natural History Museum in the autumn.

Nicola invited us to introduce ourselves and read a favourite science-themed poem, either our own or one we selected, and discuss our interests in the intersection of science and poetry that brought us to the event.

Elsa began by describing her current research interests around air, breath, and breathing, and she shared a poem by Sir Humphry Davy that conveys his experience of taking nitrous oxide.

I shared my poem “The correlation coefficient”, a pantoum recently composed during the Maths Poems research workshops at the University of Bristol, exploring questions around how a tree might be aware of death, as might the human mind. This ties into current research involving poetry, dendrochronology, and deforestation.

Claire Cox, Head of Business Development at Oxford Brookes University, is also working towards a PhD exploring poetry and disaster. She spoke of her interest in the Anthropocene, the non-human, and particularly how to speak in a non-human voice in poetry. She shared a poem of her own from the voice of a failing nuclear reactor.

Also attending, Mimi Lu, who is a DPhil candidate at Oxford University in English Literature, said she came to the launch out of her love for poetry, as well as her curiosity and interest around its intersection with science. She shared W.H. Auden’s poem, “In Praise of Limestone.”

Dr Rey Conquer, Lecturer in German literature at St Hilda’s College, expressed an interest in the science connection to colour in nineteenth-century poetry, as well as scientific ways of thinking about poetry. Rey shared a poem by Veronica Forrest-Thomson, an experimental poet who sadly died quite young, but who was no stranger to science and poetry, as her own doctoral thesis was titled, Poetry as Knowledge: The Use of Science by Twentieth-Century Poets.

Dr Joel Baldwin, who works in Music at St Hilda’s College and earned a DPhil in Music Composition, comes from a musicological aspect and that of a composer, setting poetry and text to music, including two operas, and using texts in unusual ways. He often employs texts from the historical sciences and enjoys including interdisciplinary aspects in music. In terms of subjects surrounding toxic substances and the imagination, he thinks “the brain has multiple personalities, identities.” Joel shared a poem by JH Prynne.

Dan Holloway, who works as an administrator in Liguisitics, is also a performance poet and has researched theology, taxonomy, and the creative imagination. Dan also discussed his previous research with the Maths Institute, exploring the topology of mathematical objects. His interest in taxonomy and plants brought him to the launch, and he performed a spontaneously composed poem for the group.

Sarah is a mycologist and specialist in Fungal Biology, as well as co-founder of the SciPo annual conference and the SciPo Network. Her collection Dung Beetles Navigate by Starlight was published by Cinnamon Press in 2017, and was heavily influenced by her mycology background. Sarah shared several delightful “fungi poems” by the poet Harry Gilonis.

Sarah also explained how the image selected for the SciPo launch event page was taken from a fungi experiment conducted in order for researchers to be able to watch the flow of nutrients through mycelial transport networks like those that connect trees in a ‘wood-wide web’. This was done by tagging a transported amino acid with radioactive carbon, which made the transport pathways glow. The result is an image of a responsive network that looks not far removed from dendrites of the brain, or visualisations of the universe.

Several members of the public were in attendance, expressing interest in various areas of science, including astronomy, neuroscience, physics, ecology, science and the Romantic Imagination, and more generally the appeal of the unique Science and Poetry combination.

In a wider conversation that opened up regarding the challenges and possibilities of creatively engaging with science, Joel and Sarah discussed the sonification of natural phenomena, such as trees and coral. Sarah also considered the challenges of writing poetry about drug discovery, and how to be a human and write about organic chemistry.

Claire raised the question of what poetics can be used for in the twenty-first century, exploring the notion of scale between the quantum and the cosmic. Elsa added, with reference to the Humphry Davy poem and other eighteenth century writings relating to experiments with nitrous oxide, that we seem to need new words and a new language to describe the world we encounter – perhaps engagement with science lends to this? Other interesting points raised were the notion of imagination as hypothesis and visualisations as proof (such as the x-ray, the cloud chamber).

There was certainly a palpable sense of excitement and possibility within the conversations that came out of the discussion, and this first year of the SciPo Network promises to be stimulating and thrilling in equal measure. I’m so pleased that I made the drive to Oxford for the evening, and can’t wait to get more involved.

- Miranda Lynn Barnes is a poet, writer, and educator, originally from the US, who is now settled in the UK. Miranda taught Poetry and other areas of Creative Writing for five years at Bath Spa University as Associate Lecturer, where she completed her PhD in Creative Writing in 2017, focused on how poetry functions as a place of dialogue between science and spirituality, via the lens of human experience. She now serves as Research Publications Librarian. 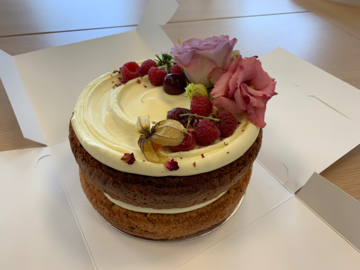