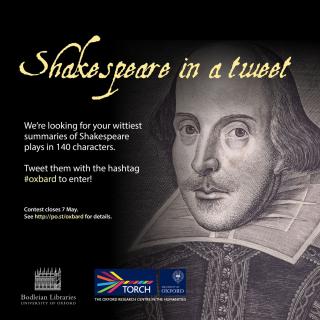 *Please note this competition is now closed. Winners will be announced shortly!*

As part of the Shakespeare 400 celebrations the Bodleian Libraries and TORCH have teamed up to run a ‘Shakespeare Play in a Tweet’ competition from 23 April to 7 May.

One of Shakespeare’s most quoted lines is ‘brevity is the soul of wit’, and although he was writing long before the advent of Twitter we like to think he would have embraced its pithy format. We invite you to honour the playwright by capturing the spirit of your favourite Shakespeare play in a tweet.

The competition is open to all. Simply tweet using the hashtag #OxBard and include a hashtag for the play from the list below.

We’ll award prizes to the most witty, insightful and creative contributions. Prizes include:

Looking for inspiration? The Reduced Shakespeare Company has tweeted all of Shakespeare’s plays. Or visit the Bodleian’s Shakespeare’s Dead exhibition for a face to face encounter with the playwright’s works, themes and characters.

Please click here for the full terms and conditions. Supported by: the Bodleian Libraries, The Oxford Research Centre in the Humanities (TORCH), the Faculty of English, Oxford University Press, Creation Theatre and the Oxford Playhouse.