In the last fifty years space has become an important analytical tool for the study of history. Almost all space in the early modern world was shared between different ethnicities, genders, classes or social statuses. These sites of contact were spaces in which ideology and religious beliefs were tempered by practical considerations. And, while there has been significant research on space, less attention has been paid to the negotiations involved in these shared spaces. What did it mean to share a space with other people, objects, and even animals? How did this impact the function of the space and its meaning?

The conference, held at the History Faculty, considered shared spaces from a number of different angles and papers explored sacred spaces shared by multiple confessions, spatial interactions between native communities and foreigners in the New World, ships as sites of shared knowledge, and the encounters of different groups at courts or in taverns. Whether these spaces were experienced separately or simultaneously by groups, their meaning was defined not just by their use, but by the religion, class, gender or ethnicity of those that experienced them. Their meanings were often in a state of flux.

This conference considered the ways in which early modern communities used shared space to define their individual and group identities, as well as their relationships with one another. The keynote speech by David Luebke (University of Oregon) explored sacred spaces and how they could be shared in the Westphalia, Germany. ‘Space’ is not just a geographical phenomenon, but as a reflection of social, political, and cultural relationships that were historically contingent. Abstract notions of space might be defined by cartographers or explorers of the new world, but, in a local context, it was defined by those who used shared spaces. Its meanings were actively constructed and manipulated by those that used them so that understandings of space were culturally conditioned.

The conference brought together scholars working in theology, history, art history, English literature and modern and medieval languages. As such, the conversions were broad and the conference enabled scholars from different countries, universities and academic backgrounds to engage in fruitful conversations. 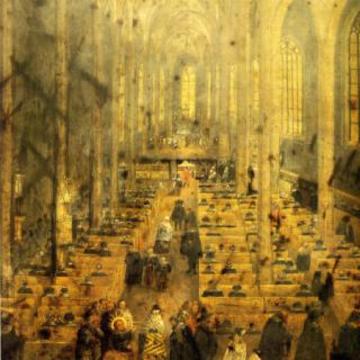