This academic year, 2020-21, Oxford students and team members of opp worked to increase the accessibility to philosophy and to create a space to actively question what philosophy is and how we’re doing it, both in form and content, and as encountered from our various positions in the world. The Oxford-student-initiated group organises activities and resources as participatory aids to discussing the subthemes of an annual journal that accepts art, poetry, and prose philosophy pieces. As the mission states: ‘the aim is to make room for the possibility of strengthening, broadening or contesting our interpretative frameworks and field of consideration.’

Each year we cover topics given little attention to within – or totally absent from – our curricula. This year, with the support of the AHRC-TORCH Graduate Fund, we were able to broaden our outreach and resource library with a podcast series aimed at facilitating engagement with the subthemes of what we call ‘turn 2’ (for the 2nd year of the journal). The podcast is a critical introductory, though by no means exhaustive, exploration of

The episodes between students and researchers from various fields in locations around the world seek to foster a globally-oriented and accessible discussion about these subthemes that transgresses dominating disciplinary boundaries of Euro-American academic institutions. In doing so we hope not only to expand philosophical horizons at Oxford but also to understand how to actively take part in locally-rooted and globally-diffusing decolonial transformation.

The project opens space to reflect on methodological, topical, and institutional concerns related to and as a practice of philosophy. We welcome you to listen to our episodes on Oxford Podcasts in the lead up to the turn 2 November launch. In striving to create a participatory philosophy space beyond the classroom and university, we further welcome any feedback and comments over email at or our social media (Facebook & Instagram)

Until the podcast’s weekly release in late September here are some anticipatory glimpses of what to expect from the series:

If you’re eager to explore these ideas and philosophies before the release you can check out resources on opp’s website including our discussion groups (with more on YouTube) & resource library learning lists. As we say: watch this space – make this space!

Thank you so much to all our guests and student interviewers and movers, some of whom have been kind enough to share their own takeaways from the series:

"Working on the South Asian side of the podcast series – particularly on issues in classical Sanskrit thought – has been a fantastic opportunity to further awareness and understanding of an important field. Not only do ancient South Asian thinkers offer a huge amount of fascinating philosophical material, but exploring the Sanskrit traditions in a comparative spirit can be a means of determining the unspoken presuppositions that condition contemporary thought.

From Parimal Patil I gained an awareness of how the initial doxographical determinations that are made when formulating a South Asian philosophy curriculum deeply affect the way the content is understood. From Swami Medhananda, I have seen how profound religious and philosophical ideas can be extracted from thinkers, such as Sri Ramakrisha, who might seem to lack a formal philosophical education."

"I wanted to get involved in the OPP podcast series because I’m exploring the public-facing aspects of academia. Recently, I have been asking myself how I can make my future research accessible and intelligible to audiences outside of the (relatively small) Buddhist Studies academic community. I have also been thinking about how to build confidence in speaking publicly about issues in my field. Participating in the series has definitely convinced me that podcasting is a powerful tool for communicating research to different audiences."

A special thank you also to Heeyoung Tae – an undergraduate team member (co-organiser and treasurer) who has been a core mover in obtaining and financially managing the grant as well as organising the series.

We look forward to collectively probing with you what ‘public philosophy’ could do in the world as critically discussed at the launch ‘teaching revolutions’ of turn 1 – also an excellent introduction to turn 2 and this podcast’s orientations. 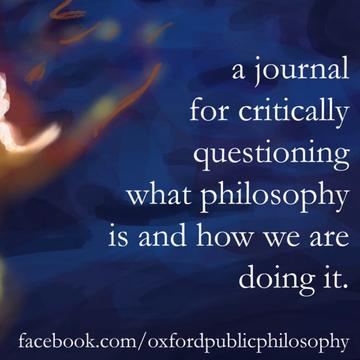