Stories of Oxford and War

For the past two months I have been working on a TORCH Heritage Seed Fund project titled “Oxford and War”. My role has been to conduct research on the people and objects of Oxford’s war stories, for inclusion in the new Museum of Oxford (it is currently undergoing a complete redevelopment). Thousands of people, locals and tourists alike, visit the Museum of Oxford each year to learn more about this city. It’s been so exciting to help Oxford’s war history be critically researched and engagingly interpreted to become a fundamental part of the story Oxford tells about itself to the world.

My own research specialty is the First World War, and so this project was a good challenge for me to step outside that. “Oxford and War” theoretically covers all intersections between Oxford and conflict throughout the entire 20th century. In practical terms, this meant stories about the Second Anglo-Boer War, the First and Second World Wars, the Spanish Civil War, the Cold War, the Falklands War, and people coming to Oxford fleeing conflict in other places, including Chile, Hungary, and Egypt.

Below is a sneak peek of some of the stories featured in my research. I think it’s important to note that I did not ‘uncover’ these, and they weren’t ‘hidden’ or ‘forgotten’. Yes, I did original archival research for this project, and these stories are new to me; but the work of various archivists made this information accessible, and particularly in the case of stories from the last 50 years, these also still exist in the memories of Oxford community members.

These stories and more will now be under consideration for inclusion in Oxford’s new city museum (located in the Town Hall). If you’re interested, come visit the new galleries when the museum reopens in a few years, and see which stories made the cut! 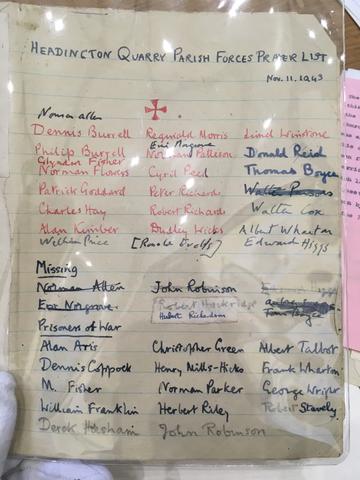