A Community History Project documenting the individual perspectives of Syrians on conflict, diaspora and life in the UK

Syrian Voices is a new participatory community history project which records the testimonies of Syrian refugees now re-settled across the UK. A series of short documentary films illustrating individual stories will be posted on our TORCH website. We will also hold termly seminars and events with our collaborators. We aim to build networks of support and skill-sharing between participants, NGOs, voluntary organisations and members of the wider community. The project explores what it means to be a refugee in the UK today and the construction of new transnational identities.

Syrian Voices is timely and relevant, not least because of the government’s new open consultation document entitled “New Plan for Immigration” dated 24 March 2020 which seeks to alter the current legislation on refugee status in the UK.

We invite Syrian participants from all backgrounds and walks of life. Everyone is welcome. The project strives to be apolitical, humanitarian and community facing. Participants are free to tell their stories in their own words in Arabic or English or alternating between both languages. We hope to create a lasting institutional archive of around 50 recorded interviews for future historians and researchers using filmed testimonies, zoom recordings and photos.

The project arose from conversations held during a Centre for Gender, Identity and Subjectivity (CGIS) Summer 2020 workshop, attended by members of Oxford and Glasgow University. It was initially conceived as an oral history project recording the impact of the Corona Virus pandemic on under-represented and minority communities in the UK.

Participants come from diverse socio-economic backgrounds and include dentists, shop workers, doctors, architects, farmers, factory workers, students, bankers, volunteers and lawyers. Most of these individuals were granted refugee status before their arrival in the UK and came through official channels. However, a small minority of participants arrived illegally and were granted asylum. These include a young man who, aged only 17 years, spent several months homeless in Istanbul before finally making his way to Calais and then into England inside a refrigerated lorry. He now forms part of a supportive and loving community in Cambridge and was able to start a successful food delivery service in lock-down. Another testimony comes from Arwa, an actress who made the perilous journey overland through Turkey and Greece via an established smugglers’ route. Her plans to start a new acting career in the UK have been thwarted by the pandemic, but she is now involved in community theatre workshops organised by The Playground Theatre in London and The Trojan Women Project (Scotland) Syrian Voices is planning a live webinar event with Arwa and the Playground Theatre to explore the theatrical response to the Syrian crisis which will be hosted on TORCH in June.

Most of the Syrian Voices participants arrived via the UK government’s Syrian Vulnerable Persons Resettlement Scheme which ended earlier this year. I was moved by the incredible eloquence, bravery and huge generosity of those who felt able to share their stories. All the testimonies are framed by unique and individual life experiences, interests and perspectives. Common strands include a deep love for Syria, vivid memories of the rhythms and routines of daily life before conflict and poignant, sometimes wry, first impressions of life in the UK. Also, extremely thoughtful insights about the opportunities and challenges posed by life in the UK. The narratives focus most vividly on the decision to leave Syria and first impressions of entry into the UK. None left their homes willingly. All hope for peace in Syria, few believe they will ever return.

During Summer of 2020, with the aid of BBC freelance producer-cameraman Nick London, we were able to film participants on location at home across the United Kingdom. While the initial aim was to record perceptions of life in lock-down, participants were keen to recount many other aspects of lived experience both in Syria and the UK. The testimonies took shape as loosely structured life-stories, often more than 120 minutes long.

In Autumn 2020 we decided to continue the project despite the lock-down restrictions using recorded zoom interviews. This represented a departure from standard oral history practices. We were sensitive to the potential pitfalls of remote communication. All interviews are encrypted and securely stored, no licence is granted to Zoom or third parties to use content. We were also acutely aware that eye contact and other vital embodied social cues and signals might be missed or misinterpreted. The almost imperceptible time lag between voice and image transmission contributes to the tiring and unsettling nature of everyday zoom interactions. However, against all expectations, the interviews were extremely fruitful and hugely rewarding. The zoom setting promoted an accelerated intimacy. Participants felt comfortable in their home space and were tolerant of the constraints posed by the digital medium, not least instances of interrupted internet. It appeared to me that the remote divide encouraged everyone to immediately connect on a more informal and personal level. The potentially stressful and intrusive pre-interview social rituals, including perceived obligations of hospitality, were no longer applicable. The digital platform created a curiously freeing, intimate and informal space.

The new digital communication platforms arising from the pandemic represent a novel and exciting chapter in oral history methodology. Historians will be able to interview participants across the globe using an economic, lasting and environmentally friendly medium that, if used ethically, with care and sensitivity, and in combination with established practices may prove to be extraordinarily fruitful. The use of digital communication platforms will of course give rise to new ethical and legal challenges and constraints, but this is also the case for more established forms of live-subject research, not least on account of the recent changes to GDPR legislation.

Acknowledgements: Project collaborators: Mehreen Saigol (Filmmaker and Community Sponsorship organiser) and Elisabeth Bolorinos Allard (Co-Convenor on the Conversations on Identity, Ethnicity and Nationhood TORCH/Stanford House seminar Series). We are very grateful for the recent funding provided by the TORCH Humanities Cultural Programme. The project would not have been able to get off the ground without the practical and moral support of Meryem Kalayci, Chaplain of St Hilda’s College, Nikki Carter and Holly Knights of TORCH. The project has also received the kind support of Lyndal Roper, Martin Conway, John Watts and Priya Atwal of the Oxford History Faculty. External supporters include Hannah Feldman (Sponsor Refugees; Citizens UK) and Gilberto Estrada Harris (Oxford Asylum Welcome), Elizabeth Parker (Getting Court) and producer/ cameraman Nick London and Stephanie Solywoda of Stanford University in Oxford. Also, Amanda Waggot and Anthony Biggs of the Playground Theatre, London and Charlotte Eagar and William Stirling of The Trojan Women’s Project. Asylum Welcome and Hannah Citizens UK supported the project from the outset and introduced us to many participants. 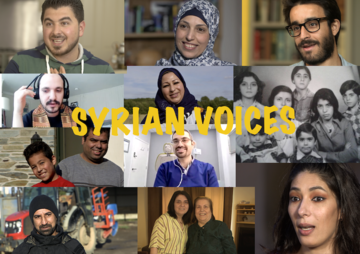