In Between the World and Me, Ta-Nehisi Coates writes a letter to his son, Samori, that recounts his personal struggles of growing up black in Baltimore in the 1980s to help Samori live free in his black body presently. Due to racist policies, Ta-Nehisi felt shut out from the larger world of access and privilege that white Americans had from birth. He now sees his son processing this same dilemma.

Coates is as cold and brutal in his materialist account of American history as he is frail and vulnerable in his account of the ever-present fear and incompetence each African American parent has in raising a child in a country designed to destroy them. He writes, “Black people love their children with a kind of obsession. You are all we have, and you come to us endangered.”

Samori gives him more inspiration than ever to try to close the gap between the worlds of black and white Americans. However, his son’s life paradoxically highlights his inability to do so. The personal insights and frustrations relayed in the form of a personal letter to his son epitomize the spirit of the times, making this a book that will be discussed for ages to come.

Over one hundred years ago, W.E.B Du Bois’s symbol of the veil captured the chasm between American blacks and whites. Over fifty years ago, Baldwin’s letter to his nephew showed all of America that, indeed, the personal was political, giving fresh insights into the interior life of African Americans. This publication continues in their tradition, making these insights a reality for a new generation with naturalistic, gritty, and lean sentences that would fit in song by Biggie or Jay-Z.

Donald Brown is completing an MPhil on the history of African American writers in Paris after World War II.

Between the World and Me is Ta-Nehisi Coates’ haunting letter to his teenage son, about what it means to inhabit a black body within the conflicted embrace of white America.

The reader soon realizes that to be a black man in America is to be profoundly fearful about the loss of one’s body. This constant threat of the violation of one’s body creates a devastating trauma that lingers long into adulthood: “I think I somehow knew that that third of my brain should have been concerned with more beautiful things. I think I felt that something out there, some force, nameless and vast, had robbed me of…what? Time? Experience?”.

Coates recounts his days of bliss at “the Mecca”, his name for Howard University, where he falls in love with the intellectualism and safety afforded to him by dwelling in a place that cherishes and celebrates diversity. It is there that Coates befriends Prince Carmen Jones Jr., a brilliant student who dies of gunshot wounds as a result of unwarranted police violence. Jones’ death is all the more tragic in Coates’ eyes, because Jones epitomizes the black male body that ultimately fails to escape a certain death despite hard-won economic and social privileges.

Coates takes his beloved son to Paris one summer to show him that another world exists: a world not constantly mired in fear. However, recounting an experience of dining out with an acquaintance, Coates laments: “My friend paid. I thanked him. But when we left I made sure he walked out first. He wanted to show me one of those old buildings that seem to be around every corner in the city. And the entire time he was leading me, I was sure he was going to make a quick turn into an alley, where some dudes would be waiting to strip me of…what, exactly?”.

Coates wishes for his son a different future, one that does not come with “generational chains” that teach all black men to fear everyone and to trust no one. Yet Coates understands that the American Dream remains blindingly white, and how it takes only one racist act for a black family to lose their beloved child forever. There is no uplifting ending in sight for America’s torturous conversation on race and racial injustice, and Between the World and Me is a timely book which demands that the reader acknowledge the intractable reality of racism and violence which continues to define millions of American lives.

Mary Jean Chan is a poet and writer from Hong Kong. She received the 2015 University of London MA Creative Writing Prize. 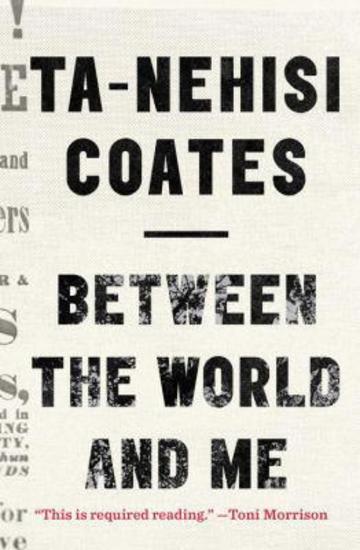