Talking Emotions: The ‘Sentimental’ Ashmolean Painting that was nearly the Great Seal of the United States

You might not recognise the object I have chosen for my Ashmolean Museum Talking Emotions podcast (Paolo de’ Matteis’ painting, The Choice of Hercules (pictured right)) – but it certainly came to the attention of the second president of the United States of America, John Adams.

On 14 August 1776, Adams wrote to his wife, Abigail. It was less than two weeks since he, together with fellow members of the Second Continental Congress, had (once again) signed a document Adams originally helped to draft: the United States Declaration of Independence.

In this letter, Adams tells his wife he has been put ‘a upon another’ committee, with his fellow Founding Fathers, Benjamin Franklin and Thomas Jefferson – this one ‘to prepare Devices for a Great Seal for the confederated States’.

The Great Seal of the United States we know today – as seen on, for example, the $1 bill – was finally approved six years after Adams’ letter, by a third committee established to consider the question of the Great Seal.

However, this first Great Seal committee – comprising Adams, Franklin, Jefferson, and the Swiss-born artist, Pierre Eugene Du Simitiere – made some suggestions that would eventually be incorporated into the final design, but otherwise debated a range of alternative images.

According to Adams, ‘Dr. F. [Franklin] proposes’ a representation of Moses dividing the Red Sea, with the motto ‘Rebellion to Tyrants is Obedience to God’, while ‘Mr Jefferson proposed’ an image combining, on one side, ‘The Children of Israel in the Wilderness, led by a Cloud by day, and a Pillar of Fire by night’ with, on the other side, ‘the Saxon Chiefs’, ‘Hengist and Horsa’.

Adams, meanwhile had his own idea – even though he admitted to his wife that his was ‘too complicated a Group for a Seal or Medal, and it is not original’.

As you may have guessed by now, Adams’ suggestion was the very object I have chosen for my Talking Emotions podcast:

I proposed the Choice of Hercules, as engraved by Gribelin in some Editions of Lord Shaftesbury’s Works.1 The Hero resting on his Clubb [sic]. Virtue pointing to her rugged Mountain, on one Hand, and perswading [sic] him to ascend. Sloth, glancing at her flowery Paths of Pleasure, wantonly reclining on the Ground, displaying the Charms both of her Eloquence and Person, to seduce him into Vice.2

Although I don’t discuss Adams and the Great Seal in my podcast, listening to it should help you to appreciate why he made the apparently odd suggestion of a 1712 image of Hercules for a new nation’s great seal.

Indeed, the context for Adams’ choice lies in my own work on Anthony Ashley Cooper, the 3rd Earl of Shaftesbury (1671-1713) – the ‘Shaftesbury’ Adams references in the quotation above, who commissioned the picture of Hercules he is recommending for the Great Seal.

On the one hand, as I argue in my recent book, Conscience and the Age of Reason, Shaftesbury can be compared with William Blake in both his criticisms of scientific rationalism3 – and, as can be seen from my Talking Emotions podcast, in his use of images, again like Blake, to make those criticisms.

For Shaftesbury, like Blake (and such contemporary critics of what is often called Enlightenment rationalism as Alastair MacIntyre and Charles Taylor)4 mathematical formulae and empirical sciences are not enough to encapsulate what it is to be human. As a result, ‘dry’ calculative reasoning on the basis of mathematical equations and scientific experiments is not only the wrong place to look for fundamental human values, it ends up distorting our entire moral outlook.

For Shaftesbury (prescient in the light of something like Richard Dawkins ‘selfish gene’) when modern science or ‘new natural philosophy’ becomes the only way of looking at human life, all human morality is reduced to selfishness, as exemplified by Thomas Hobbes’ egoism.5

Shaftesbury's criticisms of scientific rationalism mean that he is often associated, in the history of ethics, with the origins of ‘sentimentalism’: an ethical theory which claims that it is human affections and sentiments, rather than human reason as such, that best explains what humans value morally and why we value it.

It also explains why Shaftesbury is not only associated with the origins of sentimentalism but with aesthetics – the philosophical study of art and beauty – and why he thinks that art, rather than scientific reason, is a better way of both exploring, and conveying, fundamental human values.

At the same time, as I make clear in my podcast – in a way which closely relates to my discussion of ‘civic humanism’ on a recent edition of Radio 4’s The Moral Maze, heavily influenced by Shaftesbury6 – despite his historical connections with both sentimentalism and aesthetics, Shaftesbury cannot be associated with two familiar phrases…

Two phrases, which, for its critics, as well as ‘decadent’ proponents, like Oscar Wilde and Walter Pater, would seem to be the logical conclusion of an emphasis upon art and beauty in moral matters:

‘Beauty is in the eye of the beholder’

For Shaftesbury art always has a purpose – to instil moral values – and so, in consequence, neither beauty or virtue are subjective, but instead objective and universal – not in the eye of the beholder, but in the eye of the public at large.

And so, to return to Adams’ Shaftesburian suggestion for the US Great Seal: Adams understandably suggested a public work of art for the great seal of his new (re)public, not least because it is a work of art commissioned by a philosopher exploring how a society is free and equal, not only when its public has a shared set of values, but when that society’s shared set of public values are, at the same time, universally and fundamentally human – such that they are, as famously stated in the US Declaration, ‘self-evident’.

But, of course, as in all things, there is a caveat here…

If it is not the individual but the public that decides what is moral and what is beautiful, then the question of power, privilege, and elitism very quickly raises its head.

A striking question – not only in light what I say in my podcast about why Shaftesbury commissioned the painting admired by Adams – but in light of an historical quirk, highlighted by comparing what I say about Adams and Shaftesbury above, with a recent article of mine in The Journal of Religion about Shaftesbury’s legacy in Scotland…

The historical quirk here is that one of Adams’ fellow signers of the US Declaration of Independence, John Witherspoon, may have taken a wry interest in Adams’ recommendation of an image taken from Shaftesbury for the US Great Seal.

Witherspoon was the only clergyman to sign the Declaration of Independence, and the first president of what became known as Princeton University.

However, he was also a Scottish Calvinist minister, who, before his move to the United States, insisted that it was under the influence of Lord Shaftesbury that such Scottish Enlightenment philosophers as Francis Hutcheson and David Hume emphasised gentlemanly politeness and refinement of taste, precisely because they were a means to exercising aristocratic control over the ‘common people’.7

This project has been generously funded by the AHRC-TORCH Graduate Fund.

1 Adams refers to the object as an engraving, which is what it eventually became: the dying Shaftesbury commissioned a series of engravings from Simon Gribelin to illustrate the second edition of his Characteristics of Men, Manners, Opinions, Times, first published anonymously in 1711. However, the engraving admired by Adams began life as a painting completed by Paolo De’ Matteis under Shaftesbury’s very detailed (listen to the podcast to hear how detailed) instructions. It was the success of this painting, from Shaftesbury’s perspective, that encouraged him to commission a whole series of engravings.

3 Dafydd Mills Daniel, Ethical Rationalism and Secularisation in the British Enlightenment: Conscience and

6 For the seminal discussion of the connections between the theme of civic humanism and this painting commissioned by Shaftesbury, see: John Barrell, The Political of Theory of Painting from Reynolds to Hazlitt: ‘The Body of the Public’ (New Haven, CT, Yale University, 1995), pp.27-39. 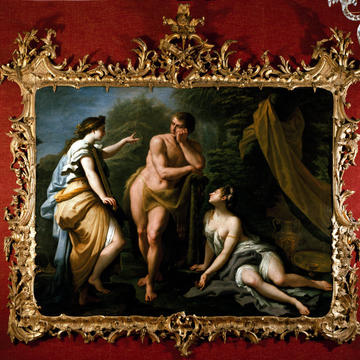