Elgar’s oratorio The Dream of Gerontius is underpinned by two autograph manuscripts of international significance: Elgar’s music, and the poem by St John Henry Newman which forms its text. Both are kept in the Birmingham Oratory – a religious order – and have thus proved difficult for scholars to access. Their digitisation is one outcome of Joanna Bullivant’s Knowledge Exchange Fellowship. Music manuscripts raise particular challenges in terms of public access and understanding.

Joanna asks, ‘How does Elgar’s autograph manuscript relate to his music as it is known and loved, and to the places that inspired him?’ Her project addresses these issues by creating a range of accessible and multimedia digital content to complement the digitised manuscripts, along with events targeting particular groups.

The National Institute for Newman Studies in Pittsburgh, USA has funded the digitisation of the manuscripts, which it will then host on its digital platform. The British Library will share selected images on its web resource Discovering Music, and will also host newly created complementary content including an article and podcast by Joanna. The National Trust is hosting two workshops – one for children with special needs and the other for a local primary school.

‘These will focus’, says Joanna, ‘on how Elgar’s music relates to his sense of difference as a working-class provincial Catholic trying to launch an international career, and on how The Dream of Gerontius was inspired by the Worcestershire landscape. Ultimately, the project is not only about a specific, very rich work by Elgar but about the wider use of digital technology to help people understand how music relates to not only the audible sound but physical artefacts and significant places.’

The project has benefited greatly from the National Trust’s expertise in reaching new audiences, which led to new activities being added to the initial proposal, including the workshops for children with autism which were based on previous, non-musical Trust activities. In addition, the digitisation process included taking infra-red images of pages with hidden content underneath pasted-down corrections, creating the opportunity to make new research discoveries and share the findings.

Now, explains Joanna, ‘Digitisation work is complete, and we are proceeding to curating the material for Discovering Music. I am also working with a filmmaker on the podcast project: this will involve filming at different locations associated with Elgar’s work including his own Catholic place of worship in Worcester, Worcester Cathedral, the Elgar Birthplace, and the Oratory. This “musical tour” will show viewers the connections between place, manuscript, and music.’

“And Thou art wrapped and swathed around in dreams/ Dreams that are true, yet enigmatical.” by Stella Langdale. Lithograph or photo-reproduction of watercolour. 1916. Illustration for Newman’s The Dream of Gerontius, facing p. 74. Scanned image and text by George P. Landow. http://www.victorianweb.org/art/illustration/langdale/7.html 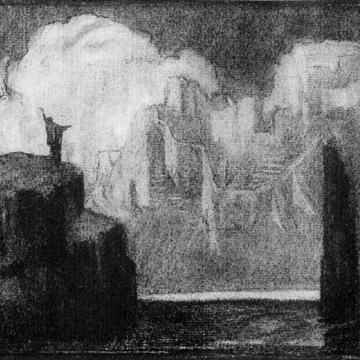