The First World War in Stone and Colour

Talking to 12-year-olds about race and commemoration

Recently I gave a talk that, for me, was more challenging to prepare for than writing a conference paper: instead of an academic audience, I was speaking to year 7s at a local Oxford school. The talk, titled “The First World War in Stone & Colour: The Participation & Memorialisation of People of Colour”, built on my PhD in progress with Oxford’s Global & Imperial History program.

In order to tackle such a big topic in the 45 minutes I was given, I split it into three parts. First we discussed ‘participation’: brief overviews of how the Indian Army, South African Native Labour Corps, Japanese-Canadians, Chinese Labour Corps, indigenous Canadians and Australians, British West Indies Regiment, French colonial forces, New Zealand Maori, and African-Americans were involved in the war. Second we discussed ‘big-picture concepts’: an introduction to major ideas I use in my research about how to understand objects, mostly drawn from material culture theory. Lastly we discussed ‘memorialisation’: both domestic and battlefield commemoration of the groups from the first section, looking at how different aspects of their identities were represented or erased at memorials and cemeteries. I encouraged the students to interrupt me with hands raised for questions, rather than waiting until the end, and really enjoyed how this served as a barometer of their comprehension.

When I reflect on which aspects of the talk’s delivery were the most challenging, it is a mix of the expected and unexpected. The wide range of their knowledge levels, as indicated by their questions, definitely caught me off guard: I had one student “ask” a comment where he reeled off the intricacies of Australian aboriginal rights laws in the 1990s, and another ask what “indigenous” meant. Both were completely valid and welcomed points, but both made me seriously question mid-talk whether I had pitched the content level correctly.

Especially due to the sensitive nature of some of what I was discussing, I had pre-written a fairly exact script; but you can’t anticipate questions, which makes them both the most fun and most difficult. When answering a question about the Maori, I noticed myself saying “the Maori were a people who” – which, in context, made sense, since I was speaking specifically about the Maori of the First World War. However, as I was talking, I was realizing the potential implications of that past tense, and so added a further sidebar about how the Maori are a dynamic living culture today, not a people who existed only in the past.

Some of the students’ questions were easy, but some were heartbreakingly difficult to answer in the amount of time we had. When discussing aboriginal Australian service in the conflict, I had mentioned that those men had not been considered citizens of Australia at the time. One student asked, “but why did the white people think they weren’t good enough to be citizens?” How does one answer that? I gave a two-minute history of colonialism and racism in Australia to the best of my ability, but felt way out of my depth.

Lastly, I was very aware that I was giving this talk about people of colour as a white person. My aim was to introduce and amplify POC narratives, not to co-opt or appropriate them. One of my personal philosophies about my research- which I consider especially important since I specialize in the dead- is to never speak for the people I study, only about them. When I make decisions about research and speaking, I am continually trying to weigh my responsibilities to both the people of the past and those in the present who feel connected to them. I very much appreciated the opportunity to speak to these students, and now have even greater respect and admiration for their teachers.

Hanna Smyth is a DPhil student in Global & Imperial History, and the Winston Churchill Scholar of Exeter College. She is currently Graduate Projects Coordinator at The Oxford Research Centre for the Humanities (TORCH), convenor of Oxford's Globalising & Localising the Great War research seminar, and co-editor of the forthcoming volume War Time: First World War Perspectives on Temporality (Routledge 2018).

------
Race and Resistance is always looking for new contributions to our blog. If you would like to write a piece, or if you have a response to a blog entry you have read here, please e-mail the blog editor, Annie Castro at anne.castro@mod-langs.ox.ac.uk. 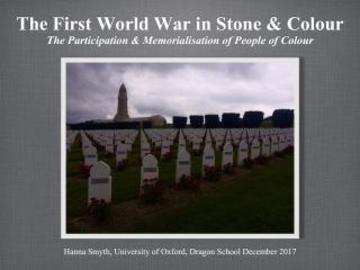