The Great Lion of the Day

There is a story about the elderly J.M.W. Turner, taken out for dinner at a hotel by the son of one of his patrons. Drinking too much wine and “staggering about,” he announced to the world, “I am the real lion – I am the great lion of the day.” “Lions”, as writers such as Richard Salmon have shown, were the subjects of nineteenth-century British social celebrity, the ‘great men’ whom everybody in elite society wanted to meet – just for the sake of meeting them. Turner was undeniably a famous artist in his own lifetime, and he enjoyed his own fame immensely. The son of a barber, his public status was an example of the social mobility sometimes made possible in this period, by a combination of extraordinary talent, business sense, and showmanship.

In recent months, it has become clear that Turner – and not just his work – remains exceptionally popular. The recent Mike Leigh film Mr Turner, which has been well-received by critics and audiences, explores what Leigh has called “Turner the personality”, with scenes of his domestic and family life as well as his public career. Viewers get to know, and to care about, his walk, mannerisms, health, his voice and his secrets. The film has a symbiotic relationship with the Tate Britain gallery, which provided it with image rights for many of the paintings, and whose current exhibition, Late Turner: Painting Set Free, makes use of the public sense of intimacy and affection prompted by Leigh’s biopic. The exhibition display Turner’s small sketchbooks and easels, for example, not only to provide technical insights about the painting process, but as suggestive artefacts of Turner the individual: “Turner the tourist” according to the Tate’s own labels, a familiar, hunched, top-hatted figure, obsessively sketching and painting. Such objects may take on a kind of celebrity aura, as relics providing the onlooker with what seem intimate traces of the physical and emotional circumstances in which iconic paintings were shaped: the spontaneous notes, torn pages, marks of spilled water, or loose hairs and leaves.

Turner himself understood and exploited the widespread fascination with the romance of individual artistic creation. His notorious performances on ‘Varnishing Days’ at the Royal Academy, during which he would finish or transform his paintings in front of an audience including critics, journalists, VIPs, and other artists, entertained and enthralled by seeming to offer viewers (and later, their readers) a privileged glimpse of the magical process of painting a famous scene. While a painting like The Burning of the House of Lords and Commons, 16 October 1834 clearly offered a viewers a sensational topical spectacle, by dramatically producing the picture’s most impressive effects in public, Turner also followed the lead of theatrical stars such as David Garrick and Sarah Siddons, and presented himself – his personal charisma, his personal genius – as part of the spectacle. He came early to the now-common realisation that his lionhood or personal ‘brand’ was central to his artistic career. When a major art collection was auctioned in 1827, he bid on his own works in order to maintain his reputation as a leading genius. The Morning Chronicle reported,

It was indeed a ticklish moment, an hour of fear, for we are creatures of circumstances, and sail as the winds of fashion listeth; and if they had been blown upon the market, it would have been fatal to the reputation of the school, and the profits of future commissions. The turn was otherwise; and […] it struck us that much was done too keep up the ball by Mr. Turner, the artist, who, unlike most other artists, has the means of securing his labours from depreciation, and from the effects of it. He was seen to bid freely for his own pictures, two of which were knocked down to him, one at 490 guineas, the other at 140 – forty more for the latter, he said, than he had received for painting it. (Morning Chronicle (18 July 1827)

Like many artists of the time, Turner painted his self-portrait as a key act of self-promotion; far more unusually, he had a gallery built as an extension of his own house. Viewers, dazzled by the red walls, the contrast between the darkness of the entrance hall and the brightly lit gallery, and the beautiful paintings, thus closely associated the experience with the impressive persona of the artist. In two small paintings by George Jones, loaned by the Ashmolean to the Tate’s Late Turner exhibition, this gallery appears as a slightly dreamy, remembered room, made to look still-glamorous despite its state of disrepair by the beginning of the 1850s, when Jones saw them. In one, Turner’s dead body lies in state before his funeral. This detail, and the miniature scale of the pictures, suggests a response to Turner’s art which was, like Leigh’s, as much a melancholic meditation on “Turner the personality”, as it was admiring of Turner the painter.

Yet Turner himself would be astonished, and maybe displeased, by the twenty-first century’s interest in his personality and private life. While nineteenth-century art critics, such as John Ruskin, occasionally ventured into short sketches of artists’ characters (describing Turner as a “somewhat eccentric, keen-mannered, matter-of-fact, English-minded gentleman”), they would not have expected a gallery displaying the works of Claude Lorrain, for example, to dedicate space to his letters, death mask, and souvenir portraits of the artist, his home and funeral, let alone to discussions of his illegitimate daughters or relationship with his daughters. This difference reflects a shift in how the public expects to relate to artists and artworks; a shift inaugurated by Romantic-period promoters of the idea of genius, like Turner, but only just begun in his lifetime. Perhaps more significantly, it also relates to the widening of public consumption and ‘ownership’ of art. An artist in the early nineteenth century could be famous among a wider public, but his or her status and income was determined almost entirely by patronage by a narrow group of the wealthy elite, some of whom became ‘fans’ of individual geniuses in a modern sense, and some of whom still regarded artists as essentially skilled craftsmen providing decorative objects for their home. Indeed, then as now, too much mass-market presence could damage as well as promote artistic prestige, provoking accusations of vulgarity and commercialism. Turner thus had to balance his fame with his professional reputation to maintain his position as “the great lion of the day.” 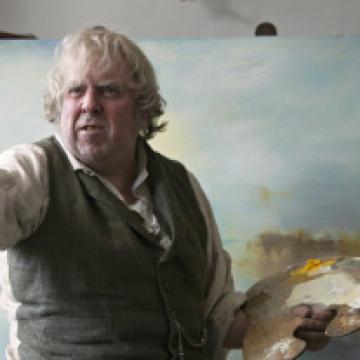