The Hurlock Coat of Arms at A La Ronde

A Micro-Internship with the National Trust Partnership

Hello! My name’s Valerie and I am a second-year undergraduate reading History and English at Pembroke College Oxford. I have just spent the loveliest week in March conducting research on the Hurlock Coat of Arms at A La Ronde as part of the University of Oxford’s National Trust Partnership, which has been an incredibly fascinating and rewarding experience.

At the beginning of the week, my fellow intern Harriet and I were assigned with questions regarding the origins and motifs of the Coat of Arms to answer. As my internship was concerned with Global Histories, I was really drawn to researching about the motif of the ‘moor heads’ on the Hurlock Coat of Arms and their relevance to the family.

The use of ‘moor heads’ in heraldry had been popular since the 11th century and had links to ‘Blackamoor’ art that originated from the Early Modern period. It was practice to use ‘Blackamoor’ art, a hybrid of the African Black and the Muslim Moor, to congratulate oneself or others on their role in the enslavement of both and British power. This was perhaps further popularised by William of Orange, who brought his Dutch practices to England, such as bringing ‘200 Blacks’ as part of his entourage as he processed from Brixham to London to claim his throne in 1688. From then, Devon became intertwined with the image of an African and British slave-ownership. This perhaps explains why four ‘mood heads’ were found on the Hurlock Coat of Arms. Using the human head or figure as crests was very common yet it was not commonly used as a charge on a shield. The Hurlock Coat of Arms was thus special in having ‘moor heads’ on both crest and shield, which suggests that this motif was what the family wanted to emphasise upon and that they were proud of their connections to the slave-trade and colonies.

The Hurlock Coat of Arms also seems to have connections to other families in Devon, who also had ‘moor heads’ on their Coat of Arms. The Hurlock Coat of Arms also bears great resemblance to the Coat of Arms of Sir John Hullock of Barnard Castle in Durham that was recorded in Sir Bernard Burke’s The General Armory of England, Scotland, Ireland and Wales. On paper, the Hurlock and Hullock Coats of Arms are exactly the same apart from how the Hullock Coat of Arms has an ostrich on its crest instead of a ‘moor head’, while the ‘moor heads’ themselves also look different on the two Coat of Arms. The actual connections between the two families would require further research, but the similarities between the two Coat of Arms might be due to how Sir John Hullock’s father Timothy Hullock was a master weaver while Devon’s wealth was historically built on the wool trade. Devon’s cloth trade played its part in the slave economies, such as exporting items to Africa in exchange for buying people. The chevron on both Coat of Arms, which represents protection or accomplished builders, perhaps reflects how both the Hullock and Hurlocks were involved in working with building materials, while the Parminters themselves were involved in building work too. Thus, the Hurlock Coat of Arms at A La Ronde suggests possible connections to other Devonshire families and the Hullock family. The families were possibly connected by their common interest in the slave trade, the cloth trade and in building work or materials. These connections and the ‘moor heads’ of the Hurlock Coat of Arms definitely deserve further exploration and I am intrigued to see what that investigation will unearth! This research project has been such an amazing experience but it was such a shame that we were not able to see A La Ronde in person. I am so excited to visit once circumstances permit! 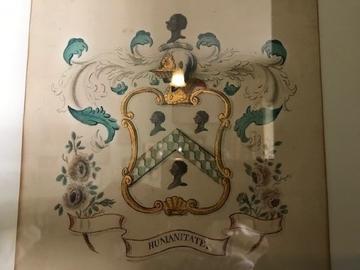 Photograph of an illustration of the Hurlock family coat of arms. a decorative gold rectangle with curvy lines enclosing three depictions of facial profiles of people of African origin, separate by a green and white chevron. Outside the gold rectangle there are swirling white and green feathers and pink flowers, crowned by another facial profile of a person of African origin. Along the bottom is scrolled the word 'Humanitate'. Copyright National Trust.