Over the 10th to 12th September 2015, 87 delegates from across the world descended on Lincoln College, Blackfriars Priory and the Taylor Institution for an interdisciplinary OMS-supported conference exploring the influences of the Dominican Order on various aspects of medieval life.  The conference brought together people from various backgrounds—not only university academics and students, but also Dominican scholars (academic study being central to Dominican life) and interested members of the public.  Thanks to generous funding from the Oxford Medieval Studies Network, all twelve students attending the conference received a bursary which helped cover their conference fee.

With thirty-one papers, two walking tours and a concert, the three days were filled to the brim.  The main feature of the conference was of course the academic papers, which ranged from the influence of Dominicans on architecture, art, books, music and liturgy, to the impact of the Dominican Order on communities across Europe, and influential Dominican philosophers and theologians.  One of the highlights was the keynote paper given by Mary Rouse on the impact of the Dominicans in Paris on the burgeoning book trade.  Following an afternoon of papers on music and liturgy, delegates enjoyed a concert of chant, polyphony and songs that can be associated with the Dominican Order, in Lincoln College Chapel.  Delegates were also treated to a walking tour around the sites of medieval Oxford with archaeologist George Lambrick; this proved so popular that a second tour was organised to accommodate everyone.  We were particularly lucky with the weather: thanks to an Indian Summer, the walking tours had optimal conditions and our lunch breaks could be spent basking in glorious sunshine in the gardens of the Dominican Priory.

Overall the conference was a great success, stimulating much fruitful discussion and enabling connections to be formed between people from different academic fields and walks of life.  If anyone would like to follow further developments in the field of Dominican studies, they are welcome to join the newly established mailing list.

Images left to right -The concert in Lincoln Chapel, Visiting the archway of the former Dominican priory during the walking tour x 2 images, George Lambrick discusses the medieval priories in Oxford. 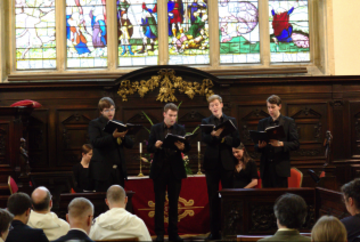