The Language of Love - Shahram Nazeri with Mana Ensemble 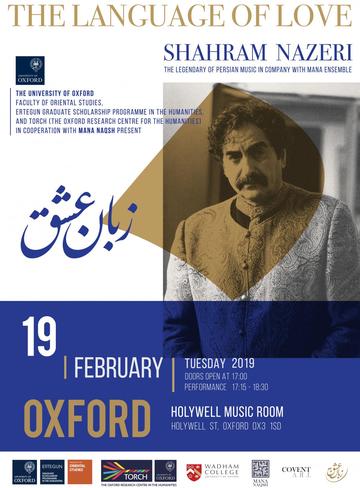 “The Language of Love” was a Persian music concert starring the legendary singer Shahram Nazeri with the Mana Ensemble, which took place on 19 February 2019 at the Holywell Music Room, Oxford.

Shahram Nazeri is a contemporary Kurdish Iranian tenor from Kermanshah who sings classical music. He has been accompanied by some of the authorities of Iranian traditional music and has also worked with his son Hafez Nazeri, a composer.

Born in a Kurdish family, he was the first vocalist to set Rumi’s poetry to Persian music thirty-five years ago, thus establishing a tradition of Sufi music within both Persian classical music and Kurdish music and his music was instrumental in introducing Western musical audiences to both Sufism and to the poetry of Rumi. The New York Times has dubbed him the "Persian Nightingale" and the Christian Science Monitor has called him "Iran’s Pavarotti".

Most recently he was awarded with the Chevalier des Arts et Lettres medal from the government of France for his lifetime achievements in Iranian traditional music. Master Nazeri has released over forty recordings to date; His "The One Hundred Leaf Flower" (Gol’eh Sad Barg) recording has held the record for the highest selling album of Persian classical music and Sufi music in history.

He has performed in Iran and abroad over the course of the last two decades an has also performed at major venues worldwide. He holds the record for the most highly attended concert in the entire Middle East.

This event was supported by the University of Oxford Faculty of Oriental Studies, Ertegun Graduate Scholarship Programme in the Humanities, and TORCH (The Oxford Research Centre for the Humanities) in cooperation with Mana Naqsh.