The Wife’s Lament. A Medieval Poem about Isolation

Over the past few months, as the spring days have lengthened into summer, everyone has been enduring a degree of isolation and enforced distance from others – some entirely alone, some confined to their own homes, many separated from family and friends with no idea when we might be reunited.

Isolation, in body and mind, is a state which seems to have particularly interested Anglo-Saxon poets, and in these circumstances there are a number of Old English poems which feel particularly timely. Most famous is a group of poems in the tenth-century manuscript known as the Exeter Book, moving reflections on the experience of enforced solitude, exile, and grief. In these poems, isolation is often associated with the desolation of winter, with stormy seas and heart-freezing cold; but one, The Wife’s Lament, situates its isolated speaker in a different seasonal setting, fitting for our own long lonely summer days.

The Wife’s Lament (the title is modern, not original) is a haunting and justly well-known poem, though difficulties of translation and interpretation make some aspects of it a mystery. It opens like several other Old English poems of lament, with a first-person speaker - in this case a woman, as the grammatical endings show - who promises to tell of her sorrows:

I utter this song, very sorrowful, about myself,
my own journey. I may tell
what I experienced of hardships, since I grew up,
recently and long ago, never more than now.

She goes on to describe her situation, but the account she gives is not easy to interpret, perhaps deliberately enigmatic, alluding to troubles she never fully explains.

First my lord departed hence from the people,
over the tumult of the waves; I had sorrow before dawn
about where my prince might be on earth.
Then I myself set out to travel, to seek the retinue

because of my great need, a friendless exile.
This man’s kinsmen began to think
in secret thoughts that they would separate us,
so that we two most far apart in the kingdom of the world
lived most miserably, and I languished.
My lord told me to take up my abode in a grove;
I possessed in this dwelling-place few dear
and loyal friends. Therefore my spirit is sorrowful,
since I found the man who was well-suited to me
to be ill-fated, sorrowful in mind,
concealing his thoughts, planning murder
with cheerful demeanour. Very often we two promised
that nothing would part us, only death alone,
nothing else; that is changed entirely.
Now it is as if it had never been,
our friendship. Far or near I must
endure my beloved’s feud.

There have been many attempts to interpret the details of the narrative given here. Perhaps, like some other women in Old English poetry, the speaker may have found herself caught up in murderous conflict between her husband's family and her family of origin, and so her husband’s kinsmen have persuaded him to reject her. But are ‘my lord’ and the murder-planning ‘man who was well-suited to me’ the same person? Has her husband betrayed her? Has he imprisoned her as a punishment, or sent her into sanctuary for her own protection? The description she then gives of the place where she is living only raises further, stranger questions:

I was commanded to dwell in this forest grove,
under an oak-tree, in this earthy barrow.

Ancient is this earth-cave; I am entirely seized with longing.
The valleys are dark, the hills lofty,
the bitter fortifications overgrown with briars,
a dwelling-place without joys. Very often here my lord’s absence
cruelly comes over me. There are living in the world
dear lovers, who lie in their beds,
while I before dawn must walk alone
under the oak-tree, through this earthy cave.
There I must sit all the summer-long day,
there I may weep for my exile,
my many hardships, for I never can
set at rest my sorrowful heart,
nor all the longing which has seized me in this life.

This is a threatening landscape of ancient and ominous associations; she seems to be living in a burial-mound or some kind of prehistoric earthwork, and we might wonder if her prison is in fact a tomb. (Is she dead, speaking from the grave?). There are challenges of translation which make this poem one of the perennial mysteries of Old English scholarship: for instance, she describes her dwelling as a herheard, a compound which might suggest a temple or grove for pagan worship, but which is otherwise unrecorded and can be interpreted in various ways. 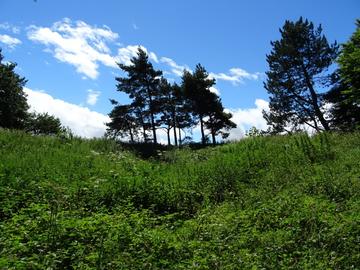 [Image: Cuckhamsley Barrow in Oxfordshire, a prehistoric barrow-mound which takes its name from the Anglo-Saxon king Cwichelm]

It’s possible that a contemporary audience would have recognised in these details a story they knew. But even without knowing the story, what does come across, strongly and unmistakably, is the speaker’s emotional state: the intensity of her grief, longing, desire, and loneliness. Those sombre, understated lines, Is nu swa hit no wære / freondscipe uncer, 'Now it is as if it had never been, / our friendship', are some of the most moving in Old English, even in a poetic corpus full of powerful descriptions of loss.

Though mysterious in its description of where the woman is in terms of space, the poem is strikingly clear in how it locates her in time, offering two almost unique words which transport the reader into the precise moment of the speaker's sorrow. First is perhaps the single most famous word in this poem, uhtcearu, a compound which means 'pre-dawn-sorrow', 'grief at early morning'. In Old English uht is the name for the last part of the night, the empty chilly hours just before the dawn, and so a particularly painful time for grief and loneliness. (As well as other kinds of threat: the dragon in Beowulf is described as an uhtfloga, a creature who flies before dawn.)

And after dawn there is a whole day of sorrow to be lived through, which she describes in equally memorable language: þær ic sittan mot sumorlangne dæg, / þær ic wepan mæg mine wræcsiþas, 'there I must sit the summer-long day, / there I may weep for my exile.' The implication is of course that the length of a whole summer day is a very long time (17 hours in England around the time of the solstice, as Anglo-Saxon writers calculated), and so this is an emphatic measurement of the duration of her sorrow. Unlike uhtcearu, the word sumorlang is not quite unique, but appears elsewhere as a measurement of time in Cynewulf's Juliana. In this poem the dauntless saintly heroine captures a demon who has been tormenting her, and holds him prisoner until she has forced him to confess all his wickedness. He says that he could not relate all the suffering he has caused to human beings þeah ic gesitte sumerlongne dæg 'even if I were to sit the length of a whole summer's day', in very similar language to the captive of The Wife’s Lament.

The use of this seasonal marker lends to this poem a different flavour from other Old English exile-laments, with which it otherwise shares so much: while they have exiled men battling against winter, journeying through icy seas, here a woman dwells solitary and stationary in her summer grief. Perhaps part of the pain is that while winter's a bad time for a journey, summer is supposed to be a good season for travelling - but she can't move, can't escape, however much the long days seem to offer her an opportunity. There is something vivid, almost nightmarish, about the idea of her sorrow accompanying her all through the glaring light of a long summer day, from early dawn to late dusk, as she is hemmed in by the oak tree and briars around her barrow in the full choking force of their summer growth.

We might imagine that it's literally summer as she's sitting and lamenting there, but of course we don't have to: perhaps the summer-long day is more a state of mind, an indication of how time is dragging. The length of the summer day echoes, subtly but emphatically, the word the speaker most frequently uses to characterise her sorrow: longing. In this poem, only 53 lines long, she uses variants of this word no fewer than four times, twice as a noun (langoþ, 'longing') and twice as forms of the verb langian, 'to long, desire'. Etymologically speaking, to long as desire and long as a measurement are in fact connected, though it isn’t quite clear what the link is; it seems to be speculated that longing was originally a desire for something a long way away, or a state of extending yourself mentally (lengthening or stretching out) to touch something out of reach.

Whatever the etymology of the words, they have an aural similarity in Old English, and longing as desire for something physically distant is clearly apposite for the speaker in this poem. The echo between sumorlang and langoþ makes a link between her yearning desire and the summer day which lengthens with her longing. And at the end of the poem, as she turns to imagining her lover, journeying far away from her ‘beneath a stormy cliff’, the last lines dwell again on their separation, taken now out of time and lengthened into eternity: Wa bið þam þe sceal of langoþe leofes abidan, 'Grief must be for the one who longing has to wait for the beloved.'

Eleanor Parker is Lecturer in Medieval English Literature at Brasenose College, Oxford, and a columnist for History Today. She is the author of Dragon Lords: The History and Legends of Viking England (Bloomsbury, 2018).