Tobias Capwell's lecture 'Armour and the Knight in Life and Afterlife'

While physically isolated from each other, attendees from all over the world flocked to their computers on June 9th 2020 to hear to a lecture by Tobias Capwell entitled “Armour and the Knight in Life and Afterlife.” The talk initially meant be held over the online Zoom, was met with such resounding interest from the medievalist community that the talk was moved onto YouTube where over 200 people watched live when the talk began. Since then over 1000 people have viewed the video online which is still accessible at this link. 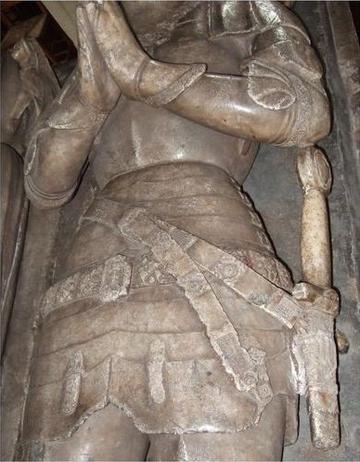 Capwell, Curator of Arms and Armour at the Wallace Collection in London, agreed graciously to talk about his research from his forthcoming book Armour of the English Knight 1450-1500. He started the lecture by addressing the preconception that some of his work is considered niche within the larger context of art history. But his passion for his subject, has forced him to become an advocate for his interests, constantly asking himself why his topic matters. How it can be useful to people working on other topics? Why is it an interesting topic? And why should other people care? This introduction, particularly resonated with me, since I have often found myself asking these same questions as ways to think about my work in a larger context and affirm the things I am passionate about. By answering these questions for himself, Capwell claimed he has been able to get a better idea of the potentially huge and interdisciplinary impact the seemingly technical subject of armour can have.

At the core of Capwell’s talk was the relationship between the practical and aesthetic purposes of armour, and how in the Middle Ages, these two purposes were often completely intertwined. He used examples of animals from ancient to Renaissance armour and art to illustrate the age-old human instincts to decorate and enhance the body. He emphasized, however, that the beauty and craftsmanship of this form of body art do not mean it was not used practically. As opposed to today where we see art as something that must remain untouched, Capwell stressed that there was no such difference between the practical and artistic when it came to armour. Rather its power came from using it in battle; for armour to have its full effect the person who owned it had to “walk the walk.”

Once he arrived at the late medieval context, Capwell discussed how he uses literature and documents to supplement the limited surviving armour and art historical records. Literature, such as the Chivalric literature of Gutierre Dias de Games, play a vital role in clarifying the role a knight and his armour had both on the battlefield and in a Christian context. Additionally, documentary evidence of sales of armour recorded the costs and buyers of this equipment on a more local level.  Before this section of the talk, I had no idea of the extent to which armour reflected social status and how diverse the arms and armour of common warfare was. I was so struck by how everyone from kings to common fighters used their equipment and material realities to proclaim to the world and to the battlefield who they were. I am ashamed to admit, I have never really considered the expressive nature of armour, taking for granted that kings would have “nicer” armour without necessarily questioning what purpose, other than his increased protection, it served. But as the face of the army and chosen by God, a king’s image on the battlefield was of utmost importance. Since very little equipment survives from the Middle Ages, it is lucky that many artists and writers were eager to preserve depictions of armour for posterity through art and literature. 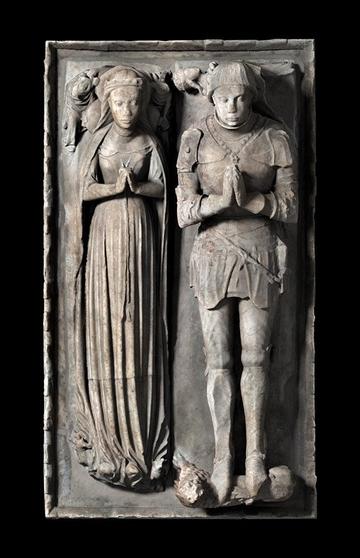 In the final section of his talk, Capwell focused on the very specific and faithful visual language used to depict armour. From contemporary battle scenes to fantastical depictions of amazons, armour is often so meticulously depicted by artists that often paintings and sculptures can be dated to the decade based on the equipment represented. To highlight this, he turned to the depiction of armour in English effigies, sculptural funerary monuments found in parish churches throughout Europe. Instead of reviewing each sculpture in its entirety, he initially focused on the straps depicted on the effigy of John Saville. On a real set of armour, he explained, these upper and lower cuirass straps would have held the front and back pieces of the chest plate in place. However, many of these straps which ended in pendants did not match. While English taste favoured ring pendants, Saville’s effigy also depicted a polygon and triangular pendant. Likewise, a Cumbrian effigy and one of Sir Thomas Erdington depicted hinges or straps which were mismatched. I would really recommend either looking up pictures of these effigies online or watching to talk just for the closeup images Capwell used in his talk.

He carefully laid out this art-historical mismatching mystery for us, before moving from the artistic rendering of effigies to the surviving medieval armoury of Churburg Castle in northern Italy. He showed us examples from this collection which showed similarly mismatched hinges. In this context, it is easier to tell that this asymmetry is a result of either a repair or a mistake in making the equipment. The reality of armour is that though it is an art form, it is not above mistakes, damage, and changes to use. The fact that all this, the lived reality of armour, is reflected in the sculptural effigies of medieval England is quite remarkable and hit home the importance that these effigies served, the attention given to them by artists, and Capwell’s entire discussion of the interrelated technical and aesthetic purposes of armour. The fact that such images of the afterlife were able to show the literal reality of these people lives down to the hinges on their armour is truly remarkable.

I was eighteen when I saw one of these sculptural effigies in person for the first time. I remember being slightly alarmed by the darkened patches on the stone from where past people had touched the figures. But after listening to Capwell’s lecture, this impulse to touch is clear. In the flickering lights of the church, the figure, painted and rendered in such detail, must have seemed so lifelike. Capwell’s entire talk, though concerned with armour made of metal and meant for battle, always brought me back to the human inhabitants of this equipment. Like he said, looking at empty armour today in museums the effect is not quite the same. The artistic and aesthetic program is only complete once there is a body inside of it. His clear passion for this subject and his wonderful combination of art history, close reading of sources, and archaeology gave the audience a window into the multivalent role arms and armour played in medieval life.

Lestra Atlas is a Master’s student of Medieval Studies in the Humanities Division. Her interdisciplinary dissertation, slightly removed from arms and armour, explores the literary and historical presence of lecherous priests in the vita of Yvette of Huy. 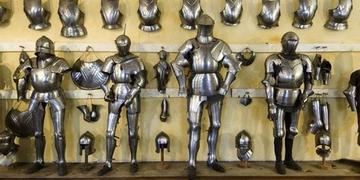