Tom Stoppard on Text and Performance

How much “Shakespeare” is there in a Shakespeare play? A facetious question, perhaps. But it’s a question that is peculiarly specific to the theatre — how much of the author can one distinguish in a play text? Unlike the novel, with its possibilities for narrative stretches where the author’s “voice” can emerge, in plays the author is heard through the lens of an actor playing a character. And that’s before you take in to account the director, stage and sound design, costumes, lighting… Of course, in poetry and prose the author can also adopt masks and assume characters, but the presence of multiple voices is more acute when dealing with live events such as plays. This relationship between page and stage, and the position of the playwright’s authorial voice, provided the subject for Sir Tom Stoppard’s first lecture as the Humanitas Visiting Professor of Drama at Oxford University. With characteristic wit, he presented a quietly unassuming meditation on his experiences both writing for and working within the theatre, arguing that the relationship between literature and drama is infinitely more complex than a simple division between the two.

Stoppard highlighted that part of what makes it so difficult to talk about authorial voice in theatre is its collaborative nature. Once the playwright finishes the text it is then at the mercy of casts and production teams, becoming something quite different in the hands of each company. Stoppard spoke about the benefits of this multi-authored approach, saying that some of the things that have given him most satisfaction in performances of his plays were not always in the original text. One of the most compelling aspects of Stoppard’s talk was that he rooted every point in specific examples, drawing on a wealth of British playwrights such as Oscar Wilde and Noël Coward to illustrate his ideas. Here, he discussed the actor and director George Alexander’s input on The Importance of Being Earnest — under his editorial pen it was reduced from a four act to three act play, Alexander becoming an integral part of the creative process.

When it comes to a perceived divide between literature and drama, Stoppard expressed his frustration with a system that is concerned with taxonomy and not with how the two genres inter-relate. In his world, drama and literature are a spectrum, not binary opposites. And within this spectrum, “bad literature” can produce “great theatre”, and vice versa. He rallied in defence of the cliché, glibly opining that ‘When I use a cliché it rises above cliché’ — it all depends on the context. As an example, he offered a monologue from his latest play, The Hard Problem. The speech in question concerns consciousness; what is it, and what distinguishes a human mind from an animal’s? In a moment of bathos, the response comes: ‘I don’t know. It’s a no-brainer.’ According to Stoppard, it’s moments like these where stock phrases can create communicative shortcuts between author and audience, playing on their cultural associations to create secondary layers of meaning beneath the surface of the dialogue.

Finally, he turned to the question of the author creating new voices for their characters. ‘The idea that a writer subjugates himself to allow the character to speak’, he argued, ‘is completely fallacious.’ While his comments on the balance between writer and theatrical personae gave some insight into how he goes about crafting his dramas, he avoided talking about how choice of topic and mis-en-scene, for example, are all part of what defines an author’s “voice”. Instead he took a textually-based approach, focusing primarily on tone and linguistic trademarks. Leaving the construction of dialogue behind, I found his passing comments about stage directions offered the most food for thought. Stage directions fascinate me, in the way they occupy a liminal space between the literary and performative. Particularly from the end of the 19th century, the period that Stoppard focused on most closely, authors wrote their stage directions as much for a reading audience as for directors and actors, thanks to the rise in distribution of published plays. They were aware that they were catering for two audiences, and many would have come across their plays in print before seeing a staged performance. So the stage directions are the moments where the author reaches out to their audience without the mediation of a character, and while they are often lost behind the spoken dialogue, these directions define the drama as much as its plot.

Certainly, the examples that Stoppard chose were particularly revealing. He read stage directions by Oscar Wilde, George Bernard Shaw, and Noël Coward, all of which described a drawing room. While these were offered to illustrate the point that the authors were not especially theatrically innovative, it was apparent that the way in which they described the drawing room immediately distinguished one playwright from the other, even from the first (unspoken) lines of the play. As the twentieth century has progressed, there are playwrights who are as identifiable by their stage directions as their dialogues — for example Harold Pinter’s pauses and Samuel Beckett’s intricate, surreal directions that are so specific as to practically constitute choreography. While Stoppard focused particularly on British theatre, this is no less true of drama in other countries which perhaps present more rich fruit for a discussion about authorial voice in stage directions. European and Russian playwrights working at the same time as Wilde were becoming far more experimental with the concept of the “literary stage direction” than their British contemporaries.

Stoppard concluded his lecture abruptly, ending with the observation that ‘Literature is not an island’. It has a relationship with the moment and with the theatrical space, and it is in this relationship that drama is born. Any questions, however, had to wait for the next day’s Q&A session, where literary scholar and biographer Dame Hermione Lee interviewed him with a focus on the course of his career. She opened the conversation by going back to the beginning of Stoppard’s career: fifty years ago this year, the Oxford Theatre Group first staged Rosencrantz and Guildenstern are Dead in Edinburgh. Stoppard harked back even further: originally, the play was going to be funded by the Royal Shakespeare Company, which had selected three promising young playwrights. Unfortunately, the RSC turned out to need the money for themselves instead. Fortunately, Frank Hauser, the director who was bringing the Oxford Playhouse back to life at that time, passed on the script to the Oxford Theatre Group, who brought it to Edinburgh. Stoppard followed suit, in time to discover that some of the pages had been duplicated in the script. They thought “that was just modern drama”, he remarked, which was received particularly well by this audience consisting mostly of English students.

For Stoppard, everything changed after Rosencrantz and Guildenstern are Dead was reviewed in The Observer. A year later, the play was put on by the National Theatre. Lee asked if this was liberating and empowering, or rather a burden of expectations, but Stoppard’s views were more pragmatic: he was married, his first son had just been born, and the bills could now be paid. It wasn’t until 1972 that his next play, Jumpers, was put on: “It never occurred to me that there was any hurry to write a new play.”

Referring back to Stoppard’s lecture, Lee turned the conversation to new productions of Stoppard’s plays, and the ways in which his plays change during productions. Stoppard discussed a lengthy example from Travesties, in which Cecily’s three-page lecture on Lenin was cut drastically to one paragraph. A later French production had wanted to keep the original text, about which Stoppard grumbled, “sûr votre tête be it”, yet it turned out that this monologue was particularly successful due to it being delivered by a naked Cecily.

Although Stoppard, as Lee put it, is “not of the school that says the writing writes itself”, he gave some thought to the idea of the writer stopping the pen, and then picking it up again. “When the pen stops,” Stoppard described, “you go”. Something reformulates, during this pause. Several of the audience questions went back to this remark: has his access to that moment changed over time? Yes, replied the seventy-eight-year-old Stoppard, whose The Hard Problem appeared just last year: his brain doesn’t work as well as it did when he was thirty. “I need much more time to achieve anything. I need five days off to do two days’ work.”

The Q&A ended on a forward-looking note. “How do you see your plays fitting into changes in cultural practices over the next fifty years?” one audience member asked. Weaving his answer into one of the topics of last night’s lecture, he claimed that he is “a special case now. A huge amount of theatre derives not from text.” Whereas the relationship between the author’s text and the character’s lines has always been mediated by many other voices and views, theatre nowadays does not necessarily even need a single author anymore. Stoppard did not seem regretful about this, however: he emphasised coexistence, with the ultimate goal in theatre and all other arts to keep making people glad they spent their time in this way. Art needs coexistence with innovation, because the theatre would have died out long ago if people preferred to spend their time in front of the TV.

For more information about the Humanitas Professorships, please visit their website. 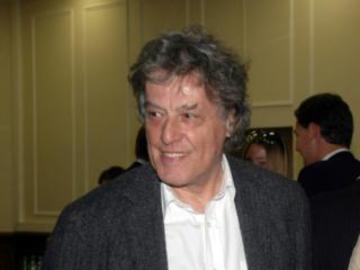