This year’s winner Up For Air by Navigo Productions was shown along with three highly commended films Aloha for Indo by Lucas Visuals, Beyond Baby Blue by White Boat TV and Code Therapy by Divya Pathak.

The films were selected by a judging committee from over 80 films submitted to this year’s inaugural competition from 20 different countries. The judges spanned the worlds of film and health, and look at 10 criteria including the filmic quality, the importance and accuracy of the public health message, and the narrative and acting within the film. The criteria will be published separately with the aim of stimulating wider debate outside the film festival on quality metrics for health related films.

Professor John Ashton, Past President of the UK Faculty of Public Health and former professor of public health at Southampton/London School of Hygiene and Tropical Medicine /and the University of Liverpool Medical School

Helen Donovan, Professional Lead for Public Health at the Royal College of Nursing

In addition to the film competition winners, the festival included films that celebrated the role of nurses in the Public Health workforce, coinciding with an exhibition on the history of public health nursing by the Royal College of Nursing which supported the screenings along with Oxford Brookes which celebrates 125 years of nurse education. Dame Eileen Sills, Chief Nurse at Guy’s and St Thomas’ NHS Foundation Trust spoke at the festival about how film can be an a powerful reminder of just how important everyone’s contribution in the health service is when it comes to creating a safe and positive environment.

The festival also included films that continued our theme of health and housing, with a chance to show Cathy Come Home, a highly influential film in this area along with a discussion with Tony Garnett, the film’s producer. He reflected on the frustrations involved in making the film as well as the worsening issue of homelessness in the UK 50 years after the initial screening of the film. He admitted that films, even those as emotionally touching as Cathy will only result in social change if there are societal and structural enabling factors, a public health message for the audience to take away from the festival. 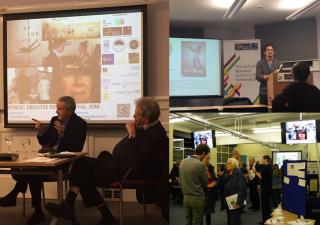