We hope to see you this coming Monday (1 May, 12.45-2pm, St Anne's, Seminar Room 10 in the New Library) for the OCCT Discussion Group! Our sessions will again be structured as an experiment in reading out of context, examining how we read literature as scholars and laying bare the underlying assumptions and implicit comparisons that inform our approach to literary texts. As always, free sandwich lunch, fruit and coffee will be provided.

Oxford Translation Day takes place in the first week of June. We have an amazing line-up: women’s writing from the post-Soviet Baltic states; translation workshops; an achingly cool modern libretto, and MUCH MUCH MORE! Don’t dare miss out! All events are free but registration is required. More info about the programme and how to book here. The timetable and programme for our Poetic Currency symposium taking place on the 18th and 19th of May are now available. Take a look!

Starting from this Trinity term, the Oxford Chinese Studies Society will host a series of public events on global Chinese culture, through which we hope to engage more with Chinese cultural workers from all over the world in the fields of literature, film, theatre and more. In this first event in the series, we have invited Chinese-British playwright/actor Daniel York and literary scholar Dr. Anne Witchard to talk about the cultural politics of the Chinese diaspora in Britain. This event will be of interest to those of you who work on East-West relations, race and colonialism, Asian diaspora and identity politics in general. Each speaker will talk for around 15 minutes and we will leave plenty of time for Q & A and discussions.

Dr. Anne Witchard: “The Chinese Girl”’: Sinophilia and the Construction of Modernist Femininities in 1920s London

Anne Witchard is Reader in the Department of English Literature and Cultural Studies at the University of Westminster. She is one of the leading scholars in the studies of Sino-British connections in modern literature. Her publications include Thomas Burke’s Dark Chinoiserie: Limehouse Nights and the Queer Spell of Chinatown (Ashgate, 2007), Lao She in London (Hong Kong University Press, 2012) and England's Yellow Peril: Sinophobia and the Great War (Penguin, 2014). She is editor of London Gothic: Place, Space and the Gothic Imagination (with Lawrence Phillips) (Continuum, 2010) and Modernism and British Chinoiserie (Edinburgh University Press, 2015).

Daniel York: Protest and Performance: The Lie of British East Asian Invisibility in the Arts

Daniel York is a successful scriptwriter, director and actor who is passionate about championing equal rights for creative East Asians. His plays and theatre works in London include Song Of Four Seasons, Fake Chinaman In Rehab, The Fu Manchu Complex. As an actor, his feature films include Rogue Trader, The Beach (directed by Danny Boyle) opposite Leonardo Di Caprio and the action film Doom starring The Rock.

Clemens Meyer and Katy Derbyshire will be discussing Bricks and Mortar (Im Stein). Born in 1977 in Halle, Clemens Meyer attended the German Literature Institute in Leipzig. Having worked as a security guard, forklift driver and construction worker, he published his first book, Als wir träumten (As We Were Dreaming) in 2006, in which he depicts a group of friends growing up and going off the rails after the fall of the Berlin Wall. Awarded the Rheingau Literatur Preis, the book was adapted for the screen by Andreas Dresen in 2015. His next publication, a short story collection entitled Die Nacht, die Lichter (2008), won the Leipzig Book Fair Prize and was translated by Katy Derbyshire (And Other Stories, 2011). His next book, Gewalten (Acts of Violence) is a diary of 2009, told in eleven stories. His 2013 novel, Im Stein, has been translated by Katy Derbyshire (Bricks and Mortar).

Katy Derbyshire studied German at Birmingham University and went on to obtain a Diploma in Translation from the University of London. She moved to Berlin in 1996, teaching English to children, and since 2002 has been working as a freelance translator. In 2008 she founded the blog love german books. Her translations include: The King of China (Tilmann Ramstedt's Der Kaiser von China, 2013), Inke Parei's Was Dunkelheit war (What Darkness Was, 2013) and Die Schattenboxerin (The Shadowboxing Girl, 2011), Clemens Meyer’s Die Nacht, die Lichter (All the Lights, 2008) and Im Stein (Bricks and Mortar, 2014) for which she was nominated for the 2017 Man Booker Prize. 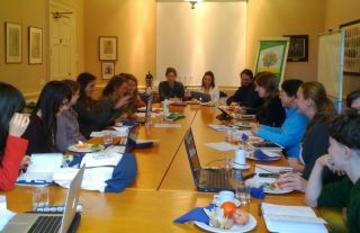