Oxford is a very long way from the sea – the nearest coast is at Southampton, some 65 miles away.  It is difficult to think of a less likely spot for talking about islands, seashores and the coastal cultures of the furthest reaches of Britain and Ireland than this landlocked, heart-of-England city; but on 14 November, 2015, Oxford welcomed travellers from near and far for a day of archipelagic papers, art, poetry and music.  The idea was to bring together contrasting perspectives on the geography and character of these islands, with a view to unsettling habitual notions, stimulating fresh debate and deepening understanding of the relationships between cultural and physical environments.   Fresh insights into the sense of place sometimes emerge through unexpected juxtapositions, correspondences and differences, and so panellists were invited to think spatially and respond to their ideas of ‘North North West’, ‘South South West’, ‘East North East’, or ‘West Far West’, as well as to ‘Centrepoints’ or to ‘Islands through Time’.  From Aberdeen, ‘the South’ might mean Newcastle; from Sligo, it might refer to Cork; from Birmingham, the Isle of Wight.  The sense of an ‘East/West’ opposition may be strongly affected by international relations and world history, while the so-called ‘North/South’ binary has rather different resonances in England, Wales and Ireland.  Many leading contributors to the fields of archipelagic studies, new nature writing, contemporary landscape art, literary studies and cultural history, including Norman Ackroyd, Nicholas Allen, John Brannigan, Tim Dee, Damian Walford Davies, Nick Groom, Robert Macfarlane, Patrick McGuinness, Philip Marsden, Seamus Perry, Angharad Price, and Peter Stothard made their way to Somerville College for a day of discussion and an evening of reflection.

It all began with a virtual circumnavigation of the Isles, as Norman Ackroyd RA steered his audience through a seamless sequence of seascapes from Herma Ness in the Shetlands to the Skellig islands off southern Ireland, before presenting his most recent work, fresh from the press.  Braced for further exploration, participants headed in all directions to listen to papers on such varied themes as ‘The Coastal Vision of W. S. Graham’, ‘Buried History’, ‘Other Edens’, ‘Ronald Lockley’s Archipelagraphy’, ‘The Edinburgh and Ettrick Shepherd’, ‘Highland and Island Space’, ‘Burns, Hogg and Singing the North’, ‘Orwell and Jura’, ‘Climate Science, Social Sciences, Humanities and the Arts’,  ‘Aran on Film’, ‘The Poetry of R. S. Thomas and the Arts of M. E. Eldridge and Kyffin Williams’, ‘Wordsworth’s Heart of Hearts’, ‘Archipelagic Modernism’, ‘Basil Bunting’s translated voice’, ‘Lynette Roberts: Machine Age Mabinogion’, ‘On Writing in Welsh’, ‘Local News from Roman Britain’, ‘Hughes’s Elmet and what remains’, ‘Jack Clemo’s “ghostly kingdom” ’, ‘Misplaced Islands’, ‘The Zhivago Complex’  and ‘John Clare in Contemporary Landscapes’.  After lunch, the award winning writer, Philip Marsden, took the audience on another imaginary voyage, sharing his fascination with the legendary island of Hy Brazil and his plans for setting off on a long trip in a wooden boat.  The Day Conference drew to a close with the screening of a scene involving the hunt for basking sharks from Robert Flaherty’s classic film, Man of Aran, with Jos Smith reading a complementary passage from Tim Robinson’s Connemara trilogy.

In the evening, Kirsteen McCue set the tone with her beautiful, unaccompanied rendition of ‘Flowers of Scotland’, for a sequence of moving poems and prose passages read by Norman Ackroyd, Paul Batchelor, Tim Dee, Daniel Keane, James MacDonald Lockhart, Robert Macfarlane, Andrew McNeillie, Gwynneth Lewis, Deirdre Ní Chonghaile , Stephen Pax Leonard, Tom Paulin, Alan Riach, and Mary Wellesley. The mood was intensified by Deirdre Ní Chonghaile’s Irish fiddle music, transporting the audience to the islands of the far west, and by Kirsteen McCue’s final performance of Burns’s ‘My Heart’s in the Highlands’, which sent everyone far away into the north before emerging into the cold, wet November night.

Unencompassing the Archipelago, organised by Fiona Stafford, Andrew McNeillie and Bernard O’Donoghue, under the aegis of the Atlantic Archipelagos Research Consortium (AARC), was made possible by a generous award from TORCH for Environmental Humanities and through the support of Somerville College.  Anyone interested in things Archipelagic might wish to visit the AARC website (aarco.org) 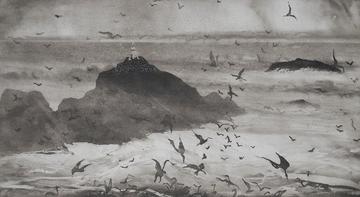